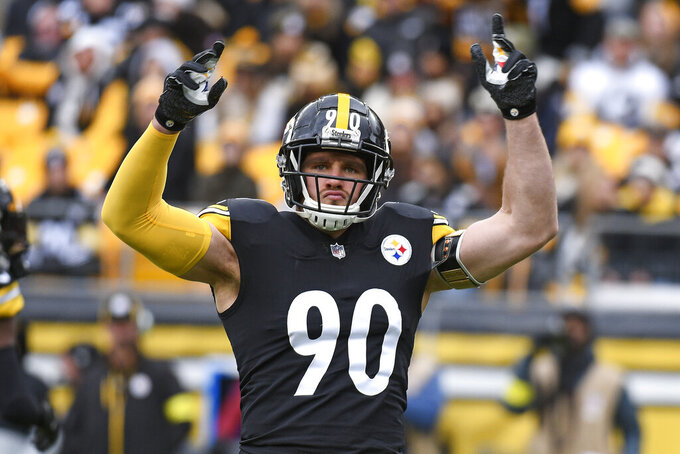 TURNOVER DIFFERENTIAL: Bengals plus-3; Steelers minus-2.

BENGALS PLAYER TO WATCH: RB Joe Mixon had a breakout game Nov. 6 in Cincinnati's most recent game before the bye week. In the 42-21 win over Carolina, Mixon averaged nearly 7 yards per carry in rushing for 153 yards with four touchdowns. He added another 58 receiving yards and a TD catch.

STEELERS PLAYER TO WATCH: QB Kenny Pickett. The rookie is coming off the first victory of his career in a game in which he both started and finished. While coach Mike Tomlin has praised Pickett's development, he still needs to make strides in terms of reading the field. Pickett has thrown just two touchdowns against eight interceptions. If the Steelers are going to make a run in the second half, they are going to have to be as much of a threat with his arm as he is with his legs.

KEY MATCHUP: Cincinnati's offensive line vs. Pittsburgh's defensive front seven. The Steelers pulled off a stunner in Week 1 thanks in large part to a defense that sacked Burrow seven times and forced five turnovers. Pittsburgh LB T.J. Watt went down late in that game with a torn left pectoral and the Steelers slumped in his absence. Watt returned last week and held New Orleans to just 186 total yards. If the Bengals can't protect Burrow, another upset may be in the offing.

KEY INJURIES: Bengals WR Ja'Marr Chase is still out with a hip injury with no timetable for his return. ... DB Dax Hill (shoulder) is week to week. ... NT D.J. Reader and S Brandon Wilson practiced this week and could be activated for the game. ... Steelers S Minkah Fitzpatrick (appendectomy) is likely to return after sitting out last week. ... DT Larry Ogunjobi (knee) could miss a second straight game. ... RB Najee Harris is dealing with a knee issue but is expected to play.

SERIES NOTES: Pittsburgh's victory in Week 1 snapped a three-game losing streak against the Bengals. The Steelers had won 11 straight over Cincinnati before the slide. Pittsburgh is 35-17 at home versus the Bengals.

STATS AND STUFF: The Bengals are one game behind Baltimore for the lead in the AFC North and are looking to win in Pittsburgh in consecutive seasons for the first time since 2005 and 2006. ... With a career-high 211 yards from scrimmage and a team-record five touchdowns (four rushing, one receiving), Mixon became one of six players in the Super Bowl era with at least 200 scrimmage yards and five total TDs in a game. ... The Bengals are 24 of 29 (82.8%) in the red zone with 21 TDs. ... After losing the first two games, including the opener to the Steelers, Cincinnati has won five of its past seven games. ... The Bengals 5-4 record is identical to the bye week last year when they ended up going to the Super Bowl. ... Burrow is completing 70% of his passes, including 18 touchdowns. ... Burrow threw four interceptions in the Week 1 loss to the Steelers and thrown only two since. ... Burrow has been sacked 30 times, second most in the NFL behind the Bears' Justin Fields (36). ... The Steelers ran for 217 yards last week, easily their best performance on the ground on the season. Pittsburgh had four different players with a carry of at least 20 yards. That's the first time the Steelers have done that since 2011. ... Harris ran for a season-best 99 yards, including a 36-yard sprint that marked the second-longest run of his young career. ... Pittsburgh LB Alex Highsmith's 8 1/2 sacks are already a career best and tied for second in the AFC. ... Steelers WR Diontae Johnson is struggling to develop chemistry with Pickett. Johnson, who signed a two-year $36-million contract extension in August, does not have a touchdown reception yet this year. ... Pittsburgh is 66-36-4 since 1950 when facing a QB drafted first overall (as Burrow was in 2020), including 1-1 against Burrow. Pittsburgh's .644 winning percentage over that span against QBs taken No. 1 is tops in the NFL ... The Steelers are 9-3-1 at home since 1990 against teams coming off a bye.

FANTASY TIP: The Bengals may have stumbled upon the way to win with Chase out when they gave the ball to Mixon early and often two weeks ago. Mixon has averaged 112 yards rushing in Cincinnati's past three games against the Steelers.