Ruggs ready for bigger role in second season with Raiders 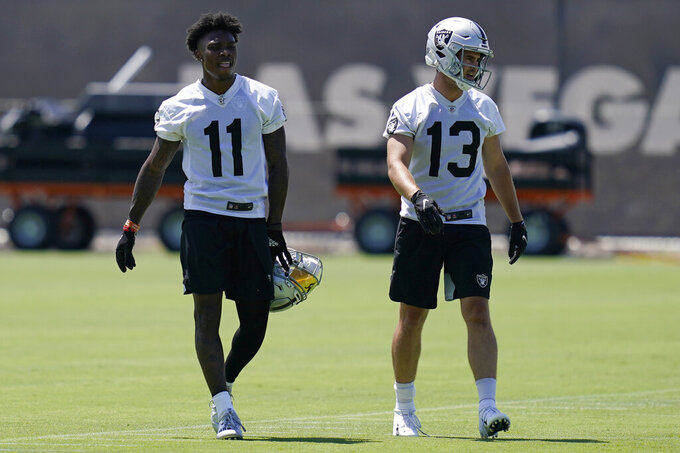 LAS VEGAS (AP) — While some critics may have deemed Henry Ruggs III’s rookie season with the Las Vegas Raiders a bust, he insists it was just a beginning.

“That’s pretty much the best way I can describe it,” Ruggs said Wednesday after taking part in OTAs at the Raiders practice facility. “It’s something to build on. It was a starting point and we are just gonna build from there. I’m ready to take on a bigger role and help my team in a bigger way.”

Ruggs, the first receiver taken in the 2020 draft at No. 12 overall, finished the season with 452 yards receiving and two touchdowns on 26 receptions, which ranked 21st among all first-year players. The 452 yards ranked 11th among all rookies, while his two touchdowns tied eight others for 15th. He was also forced to play gingerly for several weeks because of a knee injury he suffered in Week 1.

Fellow receiver Hunter Renfrow said there were plenty of hidden contributions from Ruggs that made him a vital asset to the team.

Ruggs' obvious ability to blow by defensive backs will once again make him a downfield threat, but with an entire offseason to further learn coach Jon Gruden’s system, plus in-person workouts he didn’t experience as a rookie, this might be the season to see his role elevated.

“For him, if he can just get to a place where he just expects of himself and goes out there to perform just to prove to himself that he is the player that he is now and he is going to become, I feel like that will take a lot of weight off his shoulders and allow him to go out there and just have fun,” said Darren Waller, who recorded a team-leading 107 catches last year.

Ruggs was targeted 43 times during his rookie season, but he was on the field for 581 snap counts, meaning quarterback Derek Carr aimed for the former Alabama star just 7.4% of the time, according to Sportradar. Ruggs, who emerged as a big-play receiver at Alabama, had just 145 yards after the catch (5.6 per reception) for a franchise that was starving for an offensive game-changer.

But with Nelson Agholor now in New England, this season could be a perfect opportunity for Ruggs to show off his physicality on shorter routes, while exhibiting his speed after he hauls in passes to become a difference-maker.

“I don’t think anybody’s expectations for me is higher than myself,” Ruggs said. "If I’m frustrated with anything, it’s because I didn’t do what I felt like I can do or what I’m able to achieve. It’s not critics, and what the coaches, or what other players around the league may say about me. It doesn’t really do too much for me because I know what I can do and I’m my biggest critic so no one else can make me feel bad about that.”