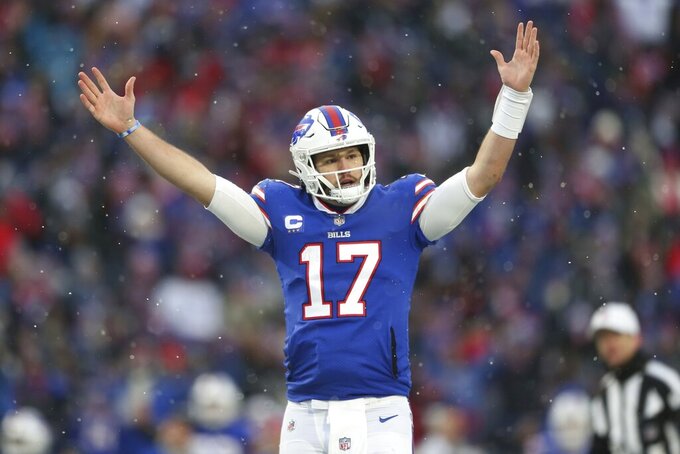 Buffalo Bills quarterback Josh Allen (17) celebrates after Devin Singletary (26) rushed for a touchdown during the second half of an NFL football game against the Atlanta Falcons Sunday, Jan. 2, 2022, in Orchard Park, N.Y. The Bills won 29-15. (AP Photo/Joshua Bessex)

Maybe this time the Buffalo Bills have finally learned their lesson on the importance of running the ball.

The pass-happy Bills have turned to the running game with more frequency in recent weeks, and they’ve been rewarded for it. After Josh Allen threw his third interception against the Atlanta Falcons on Sunday, the Bills turned to the ground game and had their most impressive rushing performance of the season. Devin Singletary had a career-high 110 yards, Allen chipped in with 81 yards on the ground, and each had two rushing touchdowns in a 29-15 victory.

“I was very impressed with the way the offensive line took over the game, and the running backs as well,” Bills coach Sean McDermott said. “I think it brings to the surface our two-dimensional offense and that’s a hard type of offense to defense.”

Buffalo’s 233 yards rushing against Atlanta were the most this season for Buffalo and the second-highest rushing total since McDermott took over in 2017. The Bills’ 19 first downs rushing were the most since the team set a franchise record of 21 against Washington in 1996. And the Bills improved to 10-2 this season when topping 100 yards rushing.

The shift to the ground game has been a change for the Bills over the past three weeks. Singletary received 23 carries against Atlanta, a career high. He had 22 carries in a 31-14 win over Carolina in Week 15. In comparison, Singletary had 34 carries over a six-game span earlier this season for Buffalo, with only three carries in a blowout loss to Indianapolis in Week 11.

Singletary worked hard throughout the offseason to improve his strength and body composition. Now, the Bills are reaping those benefits.

“He’s a really consistent player for us,” offensive coordinator Brian Daboll said. “Look, we’ve thrown the ball a lot here. We’ll continue to throw it a lot, too. But he’s done a good job. I’d say he’s had more touches, and sometimes for a running back that helps to get into a flow. Now it’s got to work to keep doing it. And since he’s been here, all he’s done is improve. He’s a really good kid that has worked really hard. He busts his tail in the offseason. Doesn’t say a whole lot. He’s certainly been very dependable for us.”

The Bills continue to stress that their offensive game plans shift on a week-to-week basis, and they still largely go as far as Allen and the passing game takes them. But the improvements to the running game come at a pivotal time with blustery winter weather and the looming postseason.

“The numbers are the numbers,” Daboll said. “What we’re always going to try to do is if we think one thing gives us an advantage, that’s the only thing we try to do each and every week. There’s not a set amount of runs that I’m looking to get called or passes or things like that. Yesterday we just so happened to run it a good bit of time, particularly there in the second half.”

Third-down defense. The Bills have allowed their opponents to convert 2 of 17 third-down opportunities over the past two weeks.

Wide receiver Gabriel Davis continues to see his snaps increase on offense even with the return of Cole Beasley to the lineup. Davis was second on the team with 40 yards on three receptions against Atlanta.

Against Atlanta, Dawson Knox failed to make a catch for the first time all year. He was targeted twice in the passing game.

9 — The Bills are 9-1 this season when scoring a rushing touchdown.

The Bills can clinch the AFC East and at least one home playoff game with a win over the visiting New York Jets on Sunday.