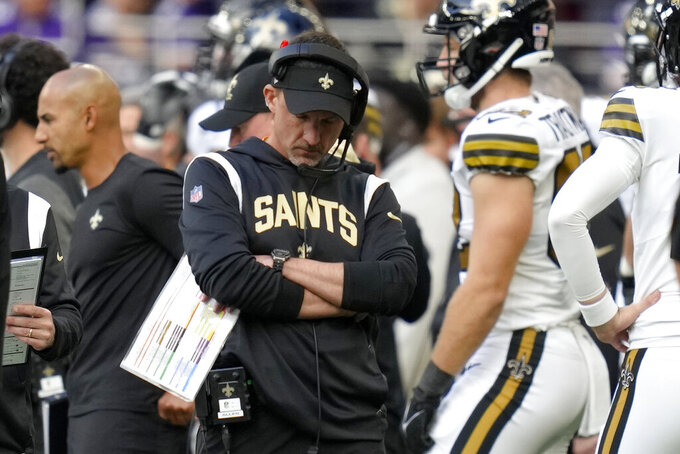 “The first thing we need to do is find out where Jameis is health-wise before we make any decisions,” Allen said Monday, after the Saints (1-3) returned from England on a three-game skid. “I don’t have complete information on that as we sit here today.”

Dalton, a former Cincinnati starter who is now in his 12th season, received a spot start in Sunday's 28-25 loss to Minnesota in London after Winston was held out because of a back injury that he'd played through for the previous two weeks.

Dalton did well enough to earn measured praise from his coach.

“Overall I thought he operated the offense efficiently, particularly the way we played in the second half,” Allen said. “I thought he was pretty good once we were able to kind of get the run and the play-action going.”

Without top receiver Michael Thomas (toe) and dynamic running back Alvin Kamara (rib) in the lineup, Dalton completed 20 of 28 passes (71.4%) for 236 yards and a touchdown without an interception — but also took two sacks and fumbled on one of them.

During the previous three games, Winston completed 63.5% of his passes, took 11 sacks, and threw five interceptions vs. four TD passes. But Winston also demonstrated, albeit inconsistently, an ability to connect on big passing plays, particularly to rookie Chris Olave.

The sample size isn't terribly big for either quarterback, and their performances can be influenced by how the offensive line matches up with certain defensive fronts, which skill players are available and how they perform on a given day.

But the Saints need to do something to change their fortunes, and Allen made it sound as though pretty much everyone is under scrutiny.

“The key is eliminating those things that keep you from winning and if you can identify that it’s coming from a certain area, then I think there’s some changes that may need to be made,” Allen said. “We’re going through that process. We’re evaluating everything. We’ve got to perform better and we’ve got to coach better. ... We all have to take ownership.”

Red-zone defense. The Saints are allowing touchdowns on 36% of opponent possessions inside their 20-yard line. That ranks third in the NFL. The Vikings had the ball in the red zone five times, scoring two TDs. Minnesota also settled for field goals of 46 and 47 yards after stalling on two other drives inside the Saints 35.

Ball security. The Saints have 11 turnovers, the most in the league prior to Monday night's game.

While Dalton demonstrated he could produce without the benefit of two top skill players in the lineup, recently reacquired running back Latavius Murray led the Saints on the ground with 57 yards on 11 carries — an average of 5.2 yards per rush — and scored a touchdown with a strong push through Vikings defenders.

“Latavius gave us a little bit of a spark,” Allen said. “There was some things he did well in the game. So that was good to see.”

Marshon Lattimore normally performs like an elite cornerback, but didn't have his best day against Minnesota wideout Justin Jefferson. Lattimore's pass-interference penalty on a deep third-down pass near the goal line set up the Vikings' go-ahead TD in the fourth quarter. He also was in coverage on Jefferson's late 39-yard catch that set up Minnesota's winning field goal.

In addition to Kamara, Thomas and Winston, the Saints also played without starting left guard Andrus Peat (concussion symptoms) and starting safety Marcus Maye (rib). It's unclear if any of them will be back this week.

17 — First-half points scored by the Saints through their first four games.

The Saints will spend the next two weeks at home, which hasn't necessarily been advantageous for them since last season. New Orleans has lost six of its past eight games in the Superdome, where it'll host Seattle on Sunday and Cincinnati the following week.