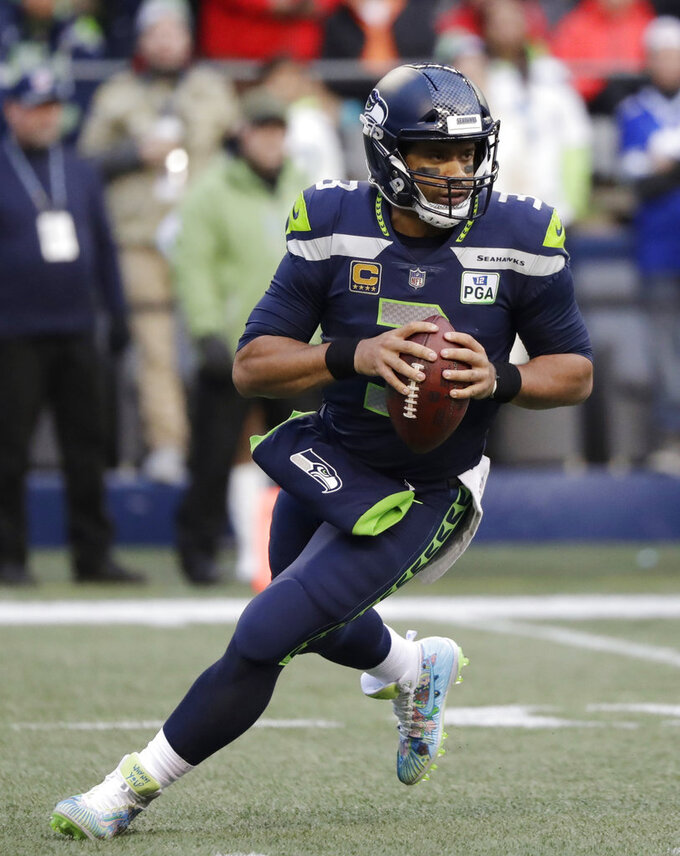 FILE - In this Dec. 2, 2018, file photo, Seattle Seahawks quarterback Russell Wilson drops back to pass against the San Francisco 49ers during the second half of an NFL football game in Seattle. Wilson is five seasons removed from raising the Lombardi Trophy, but is coming off a season where he set career highs in touchdown passes (35) and passer rating (110.9) while running less than he has at any other point in his career. (AP Photo/Elaine Thompson, File) 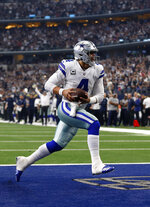 Half of the NFC playoff field is back from last year, including the defending Super Bowl champion Philadelphia Eagles , who wobbled and hobbled into the postseason party as the sixth and final seed after a season-long slog.

The Saints earned the No. 1 seed for the first time since 2009, when they beat Peyton Manning and the Colts in Super Bowl 44 for their first championship, and the Los Angeles Rams are the second seed with the franchise's first playoff bye since 2001, when the "Greatest Show on Turf" was still rocking St. Louis.

The Chicago Bears are back for the first time in eight seasons and the Dallas Cowboys and Seattle Seahawks each ended a one-year hiatus.

The Seahawks visit the Cowboys on Saturday night of wild-card weekend, and the Eagles visit Soldier Field on Sunday to face the Bears, who are Broncos star Von Miller's pick to win it all this year thanks to their dogged defense in an era infused with college spread concepts and rules that tilt toward offense more than ever.

"I feel like the Bears have a solid defense that can go all the way. They can tweak the rules, but at the end of the day, it's still football," said Miller, the MVP of Super Bowl 50 that was dominated by defense.

Strength and weakness of each of the six NFC playoff teams:

STANDOUT: Drew Brees , who turns 40 this month, is a leading MVP candidate after breaking his own NFL record for completion percentage (74.4). While his 3,992 passing yards were his fewest in 13 seasons with the Saints, he had the luxury of sitting out the last game, plus a QB's best friend is a great ground game with Alvin Kamara and Mark Ingram. The defense was among the NFL's best over the latter half of the season, holding six straight opponents to 17 points or fewer from Weeks 9 to 15.

SHUTOUT: The Saints' defense has been susceptible to poor showings against the pass, ranking 29th with 268.9 yards allowed per game through the air. And the Saints' offense has found it tougher to sustain drives and find the end zone lately. While their 31.5 scoring average ranks third in the league, they had more pedestrian totals of 10, 12 and 14 points in three of their last five games.

SHOUTOUT: "I feel like we are unbeatable when we play our best ball. ... I'm not excited that we didn't put our best foot forward heading into the playoffs." — Defensive end Cameron Jordan.

KNOCKOUT: The Rams' offense has been among the NFL's best, with Jared Goff and Todd Gurley running coach Sean McVay's innovative schemes to perfection for long stretches of the Rams' best regular season since 2001. The same five O-linemen started all 16 games. A talented group of receivers made up for the injury loss of Cooper Kupp, with Robert Woods and Brandin Cooks both topping 1,200 yards receiving. Gurley should be fresh after missing the final two games to rest his knees.

LIGHTS OUT: The Rams' defense just completed its best month of the season, but it struggled for long stretches of the fall, particularly against playoff-caliber offenses. The secondary has yet to live up to its self-given "Lock Angeles" nickname, while Aaron Donald's brilliance on the line camouflaged the Rams' relative lack of pressure from other positions. Among playoff teams, only Kansas City yielded more yards rushing than L.A. (122.3).

SHOUTOUT: "If we continue to take the football away on defense and if we protect it like we did on offense, that's definitely a recipe for success." — McVay.

DROUGHT: The Bears' biggest concern is kicker Cody Parkey. The fifth-year pro has made just 77 percent of his field goals while nailing uprights at a jarring rate in his first season in Chicago. He did it four times while missing two field goals and two extra points in a win over Detroit at Soldier Field, and he struck another upright on a missed PAT at Minnesota in Week 17. If a game comes down to a late kick, the windy city will worry.

SHOUTOUT: "I'm going to just let everybody know here in Chicago how important it is to get those fans to be as crazy as they have ever been, and I can't wait for it. It's going to be a fun day at Soldier Field." — Nagy.

TURNOUT: The Cowboys have been at their best when NFL rushing champion Ezekiel Elliott dictates the pace, allowing Dak Prescott 's passing game to be a complementary piece. The midseason trade for receiver Amari Cooper boosted a struggling unit. Defense has defined Dallas much more than in recent years. Young linebackers Jaylon Smith and Leighton Vander Esch have taken over as leaders. The pass rush is always a threat, led by DeMarcus Lawrence, who made his second straight Pro Bowl.

TIMEOUT: Dallas has the lowest-scoring and worst red-zone offense among the playoff qualifiers. More of that inconsistency fueled mostly by a spotty passing game will probably be too much for a strong defense to overcome. The O-line has lived on the edge with injuries. Left Tackle Tyron Smith (neck) and right guard Zack Martin (knee) are hanging on without the other perennial Pro Bowler in center Travis Frederick, who missed the season because of a nerve disorder.

SHOUTOUT: "It's hard to make the playoffs in the NFL. That makes the moment that much more important. I live for these moments. I love it. I can't wait to go out there and compete. I think this team is ready." — Elliott.

WIPEOUT: Russell Wilson is five seasons removed from raising the Lombardi Trophy, but is coming off a season in which he set career highs in TD passes (35) and passer rating (110.9) while running less than ever. Surprisingly, Wilson's performance comes in a season when Seattle led the NFL in rushing with 2,560 yards, more than the Seahawks had in their championship year (2,188). Seattle still has game-changing stars on defense in Bobby Wagner and Frank Clark.

WASHOUT: This is not the Seahawks' defense of the past. They finished the year 17th against the pass, 13th against the run and were 30th in the league in yards per carry allowed. There are injury concerns in the secondary with Shaqill Griffin and Tedric Thompson dealing with bum ankles. Seattle finished the regular season with a dud, allowing six sacks and struggled to beat hapless Arizona, but the game meant little. This playoff return won't last long if the O-line can't protect Wilson or open holes for running backs.

SHOUTOUT: "We're excited about the opportunity of where we can go, because we know that if we do things right and play right and work together and play together, we feel like we can beat anybody on the right day." — Wilson.

PAYOUT: Nick Foles — St. Nick, as he's affectionately called in Philly — seems to have a magic touch. He's 6-0 in must-win games the past two seasons and it wouldn't be a shocker if he pulled off another miracle in the playoffs, where he's 3-1 and won the Super Bowl MVP trophy a year ago. He could help the Bears regret squeezing the defending champs into the playoffs with a Week 17 knockoff of the Minnesota Vikings.

PUNCHOUT: The Eagles proved once again this season that uneasy is the head that wears the crown. Philadelphia's secondary is missing three-fourths of the starting unit and although the backups have played well down the stretch, they had plenty of struggles. Other than stalwart safety Malcolm Jenkins, the Eagles' defensive backfield resembles a preseason group, not a playoff bunch.

SHOUTOUT: "We're not sneaking in, we're kicking the door down. We're in this party. Nobody wanted us in, but guess what? They've got to deal with us now." — Jenkins.