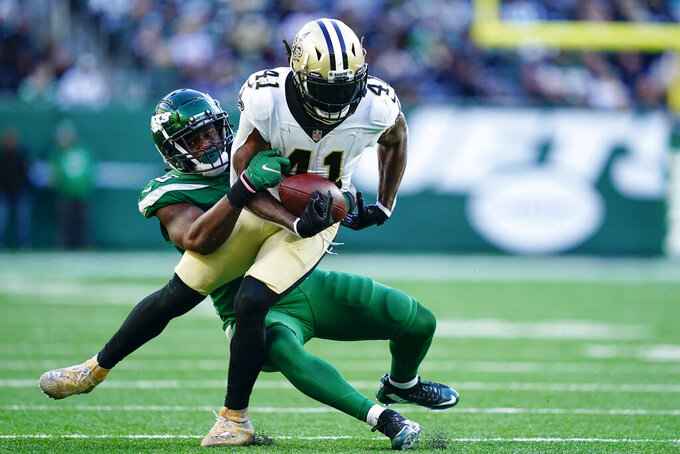 EAST RUTHERFORD, N.J. (AP) — Five straight losses didn't sit well with the New Orleans Saints. So they took it out on the skidding New York Jets, and things felt just about normal again.

Alvin Kamara ran for 120 yards and a touchdown in his return from a four-game absence, and the Saints snapped their longest skid under Sean Payton with a 30-9 victory Sunday.

“This has been a tough stretch for this team,” said quarterback Taysom Hill, who had two TD runs. “It’s been a foreign thing, losing so many games. ... It’s nice to get this win."

And having Kamara back in the backfield was key for the Saints (6-7).

“He gave us some real good juice and energy, and he always does,” Payton said.

“Man, just having his presence on the field and having the ability to hand him the ball," Hill said, “he just does so much for this team just being there.”

After injuring his right middle finger in the Saints’ previous game, Hill was 15 of 21 for 175 yards, and ran for 73 yards on 11 carries. He got hit on his hand during the game and said the injury affected him at times.

Brett Maher added three field goals and the Saints defense stifled Zach Wilson and New York's short-handed offense as the Jets (3-10) were eliminated from playoff contention. They have missed the postseason 11 straight years, tying the franchise's longest drought set from 1970-80. It is also the longest active skid in the NFL.

“It's going to flip,” coach Robert Saleh insisted. “This crappy part is part of the process, but at the same time it's not discouraging by any sense of the imagination because we've got a lot of young guys getting a lot of good playing time.”

New York was missing wide receivers Corey Davis (groin) and Elijah Moore (quadriceps) and running backs Michael Carter (high ankle sprain) and Tevin Coleman (concussion) — and it showed. The Jets went just 3 of 14 on third down and had only 256 yards of offense.

Wilson, coming off his best performance, missed receivers short at times and overthrew them at others. There were also several drops, including three in the first half by running back Ty Johnson.

After not getting a first down on their first three possessions, Wilson got one right away with an 18-yard scramble. He converted another a few minutes later with a 14-yard pass to a sliding Braxton Berrios on fourth-and-7. But the drive stalled and Eddy Pineiro, the Jets' third kicker in as many games, booted a 36-yard field goal to tie it at 3 — prompting some mock cheers from the MetLife Stadium crowd.

A few minutes later, an interference penalty by Justin Hardee on a punt by the Jets put the Saints at their 46 to start.

On his fourth straight carry, Kamara made a pretty juke to slip a tackle attempt by Bryce Hall and then zipped into the end zone for a 16-yard TD that gave New Orleans a 10-3 lead. Kamara had 35 yards on four carries on the drive.

Pineiro ended the first half with a 46-yarder to make it 10-6. The Jets got down to the Saints 24, but consecutive penalties on wide receiver Denzel Mims — illegal hands to the face and illegal formation — hindered the drive.

With the Jets trailing by two scores, they went for it on fourth-and-6 from their 49 and Wilson's pass to Keelan Cole went off the receiver's outstretched hands as Marcus Williams disrupted the play.

That gave the Saints the ball and Hill capped the drive with a 2-yard TD run. He finished his day with a 44-yard touchdown scamper — the longest of his career — with 1:07 remaining. But his teammates razzed him for not sliding so late in the game.

“I knew we needed one more first down, and you get up in the open field and it was third-and-long,” Hill said with a smile. “I should have slid. I don’t have anything else for you.”

The Jets held a moment of silence before the game in honor of former wide receiver Demaryius Thomas, who died Thursday night in his suburban Atlanta home at 33.

Thomas played the last of his 10 NFL seasons with the Jets in 2019, catching 36 passes for 433 yards and a touchdown in 11 games. The Jets showed a picture of Thomas in his New York jersey on Sunday with the words: “In Memory of Demaryius Thomas. 1987-2021.”

Saints: Take on Tom Brady and the NFC South-rival Buccaneers in Tampa Bay next Sunday night.

Jets: Head to Miami next Sunday to take on the AFC East-rival Dolphins, who won the first meeting last month.