Sam Darnold to miss at least 4 weeks with shoulder fracture 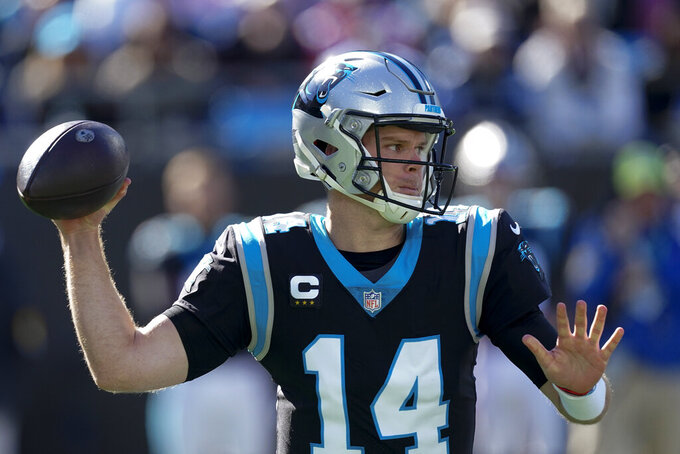 CHARLOTTE, N.C. (AP) — Sam Darnold will miss at least four weeks with a right shoulder injury, meaning P.J. Walker will take over at quarterback for the Carolina Panthers.

Darnold, who is 4-5 as Carolina's starter, suffered an incomplete fracture of the shoulder blade and will go on injured reserve, coach Matt Rhule announced Wednesday.

Walker will start for the Panthers on Sunday against the NFC-leading Arizona Cardinals. The former XFL quarterback is 1-0 as an NFL starter but has completed just 49.3% of his passes with one touchdown and five interceptions during his two seasons in the league. Matt Barkley, who was signed off the Tennessee Titans’ practice squad on Tuesday, will serve as Walker’s backup.

Walker said his job will be to “bring some juice” to a Carolina offense that has struggled in recent weeks.

Darnold originally injured his throwing shoulder in a Week 8 win over the Atlanta Falcons. He had an MRI on the shoulder the following day, but the injury wasn't considered serious enough to keep him out of Sunday's game against the New England Patriots.

Darnold wound up injuring the shoulder in a “different spot" against the Patriots after taking an elbow to the back, per Rhule.

A second MRI on Monday revealed the fracture in an area that was not previously deemed to be an issue.

“This was not something he was complaining of last week,” Rhule said.

Darnold threw three interceptions on three consecutive series against the Patriots in a 24-6 home loss on Sunday, including one that was returned 88 yards for a touchdown by cornerback J.C. Jackson. Rhule said he didn’t see Darnold wincing or struggling to throw the football on Sunday, but could tell he was “playing through something.”

“When I looked at him in the game I didn’t see a bunch of poorly thrown balls,” Rhule said. “I just saw some decisions we would like to have back.”

Rhule said with Darnold’s shoulder fracture being “incomplete” the team thinks they can manage his recovery and get him back in a four-to-six week window with rest.

In the meantime, Rhule said the Panthers would be open to signing a free agent quarterback.

“We would explore any and all options,” he said.

Whether that means the Panthers would reconsider re-signing Cam Newton, the franchise's No. 1 draft pick in 2011, is unclear. Rhule said he didn't want to discuss “hypotheticals” and said his focus is on the players that are on the roster.

That said, the Panthers have had nearly two months to sign Newton and haven't done so — so the odds appear slim of them bringing him back. One of the first moves Rhule made after arriving as head coach in Carolina was releasing the 2015 league MVP prior to the 2020 season.

Walker said he's looking forward to taking over as the Panthers starting quarterback.

"I just want to go out and play my style of game and enjoy it," said Walker, who is considered a more much mobile quarterback than Darnold. “The guys around me need that juice and I'm going to bring it.”

Panthers running back Christian McCaffrey called Darnold “one of the toughest guys around,” saying the fourth-year QB has been playing through “a lot (of injuries) that people don't know about.”

But McCaffrey said he thinks Walker can handle the job, calling him “tough as nails.”

The struggling Panthers have scored just one touchdown in their past 36 offensive possessions as Darnold has struggled to generate much offense while being pressured relentlessly in the pocket. He has thrown 10 interceptions in the past six games, and Carolina's 3-0 start to the season now seems like a distant memory with the team losing five of its past six games.

Carolina is 29th in the league in passing and 26th in points scored.

McCaffrey believes the Panthers will bounce back even as fans have exited their bandwagon in droves in recent weeks.

“We obviously have issues and nobody is trying harder than us to fix them," McCaffrey said. “We will get them fixed, and I'm excited for when it's going to start clicking. All of the outside noise and all of the stuff that we hear, we are excited to prove a lot of people wrong and prove ourselves right."