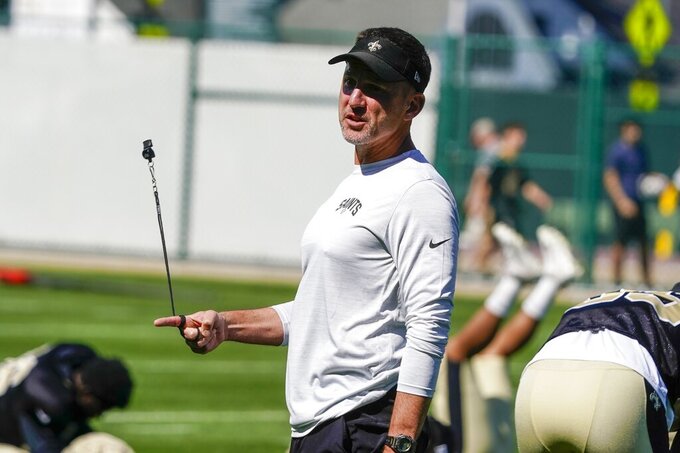 GREEN BAY, Wis. (AP) — The early exits by New Orleans Saints wide receiver Jarvis Landry and offensive tackle James Hurst exemplified how the second day of joint practices with the Green Bay Packers got much more physical than the first.

Wednesday’s scrimmage featured three scuffles, two between the Saints offense and Packers defense plus a third during special teams drills. The first skirmish came in the opening minutes and sent Landry to the locker room.

“Everybody goes in and they get coached up a little bit, and so they come out with a little bit more fire the next day,” Saints coach Dennis Allen said. “You don’t like seeing it, but it’s part of what happens in these practices when you’re going against another team. We dealt with it, we moved on from it and I thought we had a couple of good days of work.”

The more noteworthy issue for the Saints was Hurst’s departure because of a foot injury. Allen said he would have no update on Hurst’s status “until we get a chance to delve into it a little bit more.”

Landry left practice immediately after the first fight, and Allen said the two events were related. This comes two weeks after the Saints removed offensive tackle Trevor Penning and defensive tackle Malcolm Roach from a practice for fighting.

Although he initially didn’t say whom he was referencing, Stokes later acknowledged he was talking about Landry.

Stokes said he expected Wednesday’s practice to get more intense because of how the Packers defense had outperformed the Saints offense a day earlier.

Even with the fighting that occurred, Stokes said he believes these joint practices are beneficial in how they prepare teams for the season.

“I actually think joint practices are actually better than real (exhibition) games right now, especially for preseason,” Stokes said. “You can run situations. You can do a lot of different things that you probably wouldn’t get in a real game. I actually love it. It shows who’s a competitor, who’s a dog, who’s this, who’s that.”

The joint practices also provided tests for receivers on both teams.

After noting Tuesday the repeated mistakes some of Green Bay’s younger receivers were making, Packers quarterback and reigning MVP Aaron Rodgers met with the wideouts Wednesday morning and expressed his concerns. Green Bay’s young receivers responded with a better performance.

“It was just really giving us advice,” said Samori Toure, a rookie seventh-round pick from Nebraska. “Basically, letting us know that the Green Bay receiving corps has always been held to a super-high standard. All the legends who have been through here. It’s just about us carrying on that standard and stepping up.”

Rodgers isn't expected to play in Friday’s exhibition game. Neither is Saints starting quarterback Jameis Winston, who is recovering from a foot injury.

Winston performed in drills early in the day when the two teams were on separate fields, but he didn’t participate in the scrimmage.

That meant Michael Thomas was catching most of his passes from Andy Dalton as the two-time All-Pro receiver continues his comeback from an ankle injury that caused him to miss all of last season and limited him to four games in 2020.

"The program that the team’s had me on with coach DA and the training staff has really allowed me to like start slowly transitioning and getting back to my old self and getting a flow for the game,” Thomas said.

"Being out here in these joint practices allows me to compete against another guy, work on some technique and just get back to the real thing.”

NOTES: The Packers signed safety De’Vante Cross and released wide receiver Malik Taylor. Taylor had played in 25 regular-season games and two playoff games over the past two seasons. He has seven career catches for 80 yards and one touchdown.