Shoulder injury 'over with' as Vikings harness power of Cook 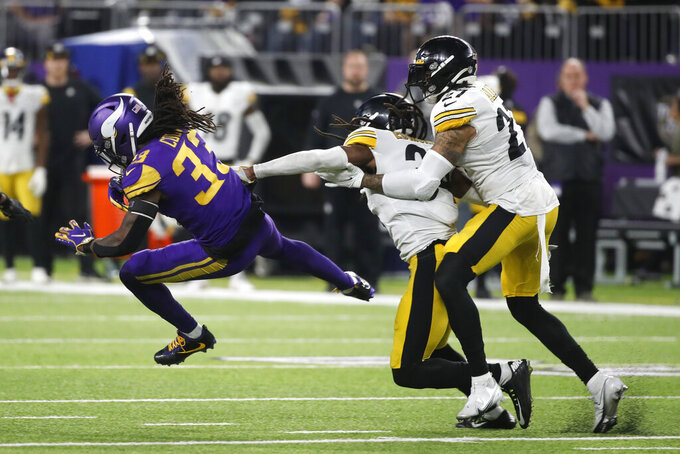 EAGAN, Minn. (AP) — Dalvin Cook left his injury in the dust with the Pittsburgh defense last week, giving the Minnesota Vikings a vital boost at this increasingly critical stage of their season.

Despite the dislocation that sidelined him for the previous game, Cook is confident his shoulder will be strong enough to carry the Vikings the rest of the way — both physically and metaphorically.

“I’m not dealing with no pain or nothing. It’s over with. When I came back in, got it back stronger, got it where I needed to go at. Now it’s time to play football,” said Cook, who rushed for 205 yards and two touchdowns and had a 17-yard catch on third down late in the fourth quarter to help the Vikings hold on to beat the Steelers 36-28 last week.

The fifth-year tailback, who is 22 rushing yards short of his third consecutive 1,000-yard season, will continue to wear a harness underneath his pads for shoulder stability.

Otherwise, Cook said, don't assume he's not at full strength because he returned to game action from the injury in 11 days.

“You give me the ball, we’re going to be good,” Cook said on Thursday before practice.

Now the Vikings (6-7) are preparing to play at Chicago on Monday, against a Bears defense that has been leakier against the run than usual.

With backup tailback Alexander Mattison on the COVID-19 reserve list, a late-season night game on one of the NFL's slipperiest playing surfaces and a depth issue at wide receiver potentially hampering the passing attack, Cook will be as integral as ever to Minnesota's success.

“Dalvin is a warrior, one of the heartbeats of our team,” wide receiver K.J. Osborn said. “He’s a leader, and he’s always going to get the energy up. We were so happy to have him on the field back with us again doing what he does.”

Another player who has settled back in the lineup, albeit with far less fanfare and under drastically different circumstances, was center Garrett Bradbury.

The 2019 first-round draft pick has had a rough year, often struggling in blocking matchups with bigger nose tackles before missing two games with COVID-19.

When Bradbury was cleared of the virus, he found himself on the sideline for two more games as Mason Cole stayed in his spot. It was only on Dec. 5 at Detroit when left tackle Christian Darrisaw was out with an ankle injury that Bradbury got the center job back. Cole moved to right guard so Oli Udoh could fill in at left tackle.

While he was out, Bradbury took advantage of the down time by reviewing his game film from the first half of the season. It was an eye-opener.

“Watching the tape, I was playing to not mess up, playing a little timid. Whereas in the moment, I felt like I was just playing good, good enough,” Bradbury said. “But the last two games, I feel like I’ve taken a different mindset to it. It gives you a new perspective, and I think that’s good for everyone, and I think it motivated me more.”

Bradbury played a sound game against the Steelers and their 3-4 scheme in both run blocking and pass protection, raising the question of what the Vikings will do with the lineup once Darrisaw comes back. He was back at practice on Wednesday on a limited basis. Wide receiver Adam Thielen remained out, but coach Mike Zimmer said the Vikings are hopeful his ankle will be ready in time.

“With this offense, once it’s clicking, it’s clicking," Cook said. "We go into every game with the same mindset. We know we’ve got the weapons to not be stopped when we’re really locked in and hone in on our little details. We just go into every game feeling like we’re the best on the field. It’s not an arrogance. It’s just a confidence we have in how we prepare and do stuff around here.”