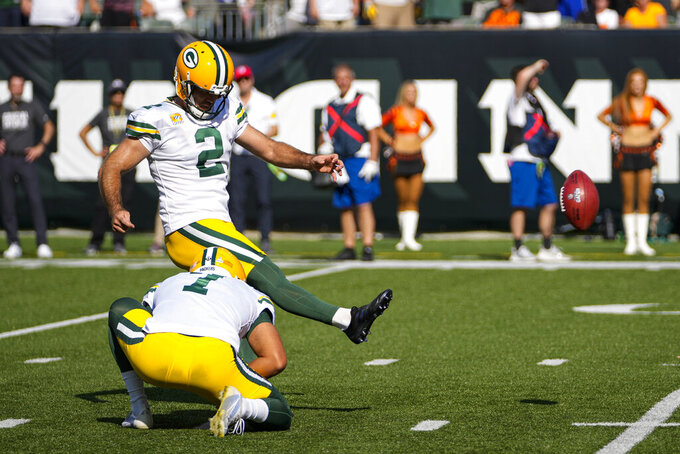 Green Bay Packers kicker Mason Crosby (2) kicks a field goal from he hold of Corey Bojorquez in the second half of an NFL football game against the Cincinnati Bengals in Cincinnati, Sunday, Oct. 10, 2021. (AP Photo/AJ Mast)

Mason Crosby and Evan McPherson missed five field goals in the fourth quarter and overtime before Crosby finally connected to give Green Bay a win over Cincinnati.

Eight kickers combined to miss 11 extra points, increasing the total to 12 in Week 5 to tie the NFL record set in Week 11 of the 2016 season.

Carolina allowed a blocked punt with four minutes remaining in the fourth quarter that led to Philadelphia scoring the go-ahead touchdown in a comeback win.

Oh, there were some “special” moments, too.

Greg Joseph made a 54-yard field goal as time expired to give the Minnesota Vikings a 19-17 victory over the winless Detroit Lions. Joseph also kicked a 55-yarder, one of nine field goals of at least 50 yards across the league on the day.

Crosby redeemed himself on his fourth try with a 49-yarder to win it late in OT.

Overall, however, it was a miserable day for kickers who have one of the most thankless jobs in sports.

They’re mostly considered the most dispensable players on the team with exceptions like Baltimore’s Justin Tucker. When they make a kick, it’s expected because that’s what they’re paid to do. When they miss, especially in key situations, everyone wants to run them out of town.

Kickers would be smart to stay off social media. In many cases, they ought to rent apartments instead of buying houses.

Crosby experienced highs and lows on opposite extremes in the same game. He set a franchise-record for consecutive field goals by making his first three against the Bengals to run his successful streak to 27.

Then, he did his best to make Packers fans forget he hadn’t miss a regular-season field goal since Week 17 of the 2019 season.

Crosby hooked a 36-yard try wide left with 2:12 remaining in regulation. After Cincinnati rookie Evan McPherson hit the right upright on a 57-yard attempt in the final minute, Crosby was wide left from 51 as time ran out.

Crosby made it three misses in a row by pushing a 40-yarder wide left early in overtime. McPherson answered by drilling the ball off a flag just to the left of the upright on a 49-yard try, though he leaped into his holder’s arms thinking he made it.

According to Elias, it was the first time three potential winning field goals were missed in the fourth quarter or overtime.

Crosby, mercifully, ended the streak of futility to lift the Packers to their fourth straight win and keep auditioning kickers away from Lambeau Field this week.

The 15-year veteran isn’t going anywhere. He once missed four field goals and an extra point in a loss to Detroit in 2018.

In Los Angeles, Tristan Vizcaino was one of three kickers to miss a pair of extra points Sunday. His second miss nearly cost the Chargers, who had pulled within 42-41 late in the fourth quarter against Cleveland. But Justin Herbert got the ball back and LA scored to beat the Browns 47-42.

“With Tristan, we’re going to have to deal with this. He’s a young kicker in the league,” Chargers coach Brandon Staley said. “He has a fantastic kickoff leg, and as a kicker, he needs to be in a lot of those situations to make sure he gets his rhythm and timing. He missed two today, that was disappointing. But what we need him to do is bounce back. He’s a talented guy. He’s just like a lot of young players in the league; you have to stay patient because he’s good enough. If he weren’t good enough, that would be a totally different story. But he’s good enough and we have to stay patient.”

The Panthers had no kicking problems but their special teams letdown occurred on the punt unit. They were leading the Eagles 18-13 when T.J. Edwards raced in to block Joe Charlton’s punt and Shaun Bradley recovered at the Panthers 27. It was Philadelphia’s first blocked punt since Dec. 17, 2017. A few plays later, Jalen Hurts scored the go-ahead TD.

Coaches often preach the importance of all three phases - offense, defense and special teams - doing their job to have success. Quarterbacks get most of the glory and there’s plenty of praise spread around for offensive and defensive players. For the special teams guys, it’s best to go unnoticed.