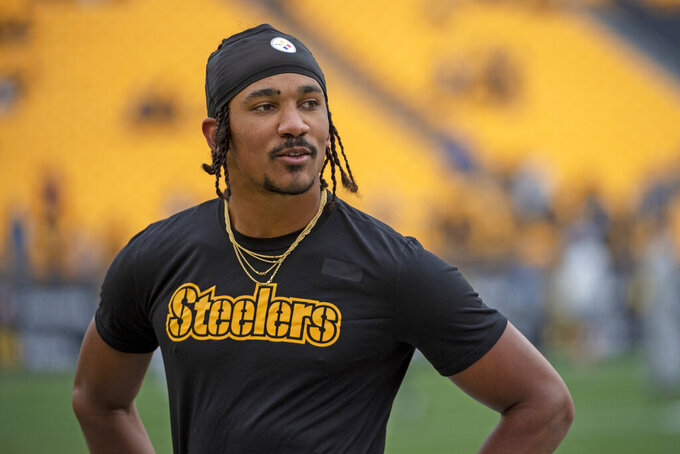 FILE - Pittsburgh Steelers cornerback Ahkello Witherspoon (25) warms up before an NFL football game against the Detroit Lions, Sunday, Nov. 14, 2021, in Pittsburgh. The veteran cornerback is sticking around after signing a deal to stay in Pittsburgh rather than leave in free agency. (AP Photo/Justin Berl, File)

PITTSBURGH (AP) — Ahkello Witherspoon spent most of the first half of the 2021 NFL season standing on the sideline in sweatpants while the Pittsburgh Steelers went on without him.

He ended it with his swagger returned and his future suddenly bright.

Not pouting will do that. So will a very direct conversation with coach Mike Tomlin. Witherspoon credits both for the two-year contract he signed earlier this month that will keep the veteran cornerback in Pittsburgh.

“The most important opportunity is the next one,” Witherspoon said Monday. “So if you spend your time thinking about or worrying about when that's going to be, you're wasting valuable minutes on preparing and being ready for that moment.”

So Witherspoon made it a point to not get discouraged as he struggled to move up the depth chart after being acquired from Seattle on the eve of the 2021 regular season. The Steelers loved the 6-foot-2 Witherspoon's size. He loved the chance to reboot his career after spending less than five months with the Seahawks.

Yet Witherspoon couldn't seem to get into the rotation. Yet rather than fixating on being inactive on game days, he put his head down. It helped that Tomlin provided clarity.

“He was very honest about where we stood and what it was going to take for me to go on the field,” Witherspoon said. “And then it was just up to me to take advantage of the opportunity.”

One that finally came when Joe Haden went down with a foot injury in November. Witherspoon flourished in lockstep with the number of snaps he saw. He finished with a career-best three interceptions, knocked down nine passes and earned the trust of senior defensive assistant — and now defensive coordinator — Teryl Austin in the process.

The Steelers saw enough to make an offer to Witherspoon as he entered free agency. A year ago, Witherspoon hit the open market and left San Francisco for Seattle. This time, he decided to stay in a place where he's now comfortable.

He also finds himself in a slightly different position now than he was nine months ago. With Haden gone, Witherspoon finds himself one of the more experienced players in the secondary along with Cam Sutton and recently signed Levi Wallace.

Witherspoon, however, doesn't view Wallace as a threat to his playing time, but as a teammate.

“It's just about making the team better, pushing myself, pushing him, pushing each other," Witherspoon said. “And I think when you have high-caliber guys in one building, all you are going to do is make your team better and make the players better and that’s what I’m here for.”

Pittsburgh's defense is likely to have a bit of a different vibe this season with Austin taking over for the recently retired Keith Butler. Austin spent the past three years working closely with the secondary before moving into a larger role. Witherspoon thinks the relationship Austin built with the defensive backs won't change much in 2022.

“I know he listens to what we say,” Witherspoon said. “He understands the challenges that come with playing in this league on the back end."

Even if the defense's biggest immediate challenge is in the front end. The Steelers finished last in the NFL against the run last season. Witherspoon believes it's just as much the responsibility of the secondary as the defensive line to get it fixed.

“I think it’s just trusting your teammate next to you,” he said. “You’re really just committing to playing football. I think that’s something that we’ve shown that we can do on certain games, but then some games it falls off. It’s just about being consistent and leaning on that approach and remembering what’s giving us success and replicating it.”

NOTES: The Steelers signed former Eagles outside linebacker Genard Avery to a one-year deal on Monday. Avery, who started 12 games for Philadelphia last season and finished with a career-best 43 tackles, provides depth behind Defensive Player of the Year T.J. Watt and third-year linebacker Alex Highsmith.