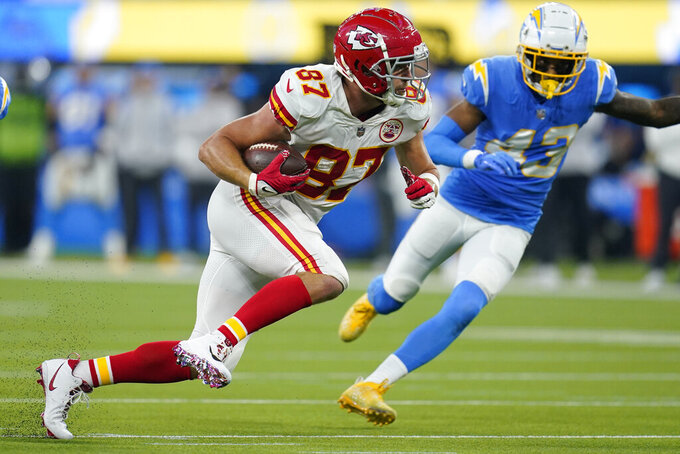 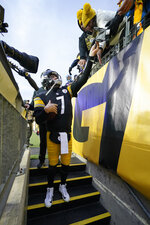 BETTING LINE: Chiefs by 7 1/2, according to FanDuel SportsBook.

STEELERS PLAYER TO WATCH: RB Najee Harris is coming off the worst game of his rookie season, running for 18 yards and catching two passes for 8 yards in a win over Tennessee. He'd been over 100 yards from scrimmage each of the previous two games, including a three-touchdown performance against Minnesota.

CHIEFS PLAYER TO WATCH: TE Noah Gray hasn't gotten much publicity this season, and the fifth-round draft pick has just four catches for 18 yards. But with Travis Kelce and backup Blake Bell on the COVID-19 list, and Jody Fortson on injured reserve, that leaves the former Duke standout at an important position in the Kansas City offense.

KEY MATCHUP: The Chiefs' run game against the Steelers' defense, which is allowing 143.9 yards per game on the ground — better only than Houston. If the Chiefs are missing Kelce and WR Tyreek Hill to COVID-19, they could lean on their ground attack to move the ball and shorten the game.

SERIES NOTES: The Steelers have dominated the series, winning 23 of 35 previous meetings, and had won seven of the past eight before Kansas City won the most recent matchup in 2018. Patrick Mahomes threw for 326 yards with six TD passes and no interceptions that day as the Chiefs held on for a 42-37 victory.

STATS AND STUFF: The Steelers' tie against Detroit leaves them behind eight-win Baltimore and Cincinnati in the AFC North. ... Pittsburgh managed just 168 yards total offense in last week's win over Tennessee. ... Steelers K Chris Boswell hit four field goals and his only PAT try against the Titans. ... Steelers QB Ben Roethlisberger threw for 452 yards and three TDs without a pick in his last game against Kansas City in 2018. ... Pittsburgh WR Diontae Johnson has at least five catches in nine straight games, the third-longest active streak in the NFL. He also has at least 90 yards receiving in four of his last five. ... Pittsburgh DE T.J. Watt had 1 1/2 sacks and forced a fumble against Tennessee, giving him a league-leading 17 1/2 sacks for the season. ... Steelers FS Minkah Fitzpatrick had a career-best 18 tackles and forced a fumble against the Titans. ... Kansas City has won seven straight games to take first place in the AFC playoff race. It's the longest active streak in the NFL. ... The Chiefs are trying to win at least 11 games for the fourth straight regular season. ... Andy Reid can pass Marty Schottenheimer (101) for the second-most wins in Chiefs history behind Hank Stram (124). Reid is the only coach in NFL history with at least 100 wins with two franchises. ... Kelce needs 53 yards receiving to become the second player in Chiefs history and sixth tight end in NFL history with 9,000 yards receiving. Hall of Famer Tony Gonzalez has the club record with 10,940 yards. ... Kelce had 10 catches for a career-high 191 yards against the Chargers last week. He had the tying TD catch in the fourth quarter and the winner in overtime. ... Hill needs four catches to break Kelce's single-season Chiefs record of 105 set last season. Hill needs two TD catches to pass Otis Taylor (57) for second in Chiefs history. ... Ward had a career-best 10 tackles and two pass deflections against the Chargers. ... Chiefs FB Michael Burton had his first career TD run against the Chargers.

FANTASY TIP: Keep an eye on the transactions report for COVID-19 news in Kansas City. If the Chiefs are missing Kelce and Hill, that makes Josh Gordon and Mecole Hardman viable options in deep leagues. But it really makes RBs Clyde Edwards-Helaire and Darrel Williams enticing options against a run defense that has been among the NFL's worst.