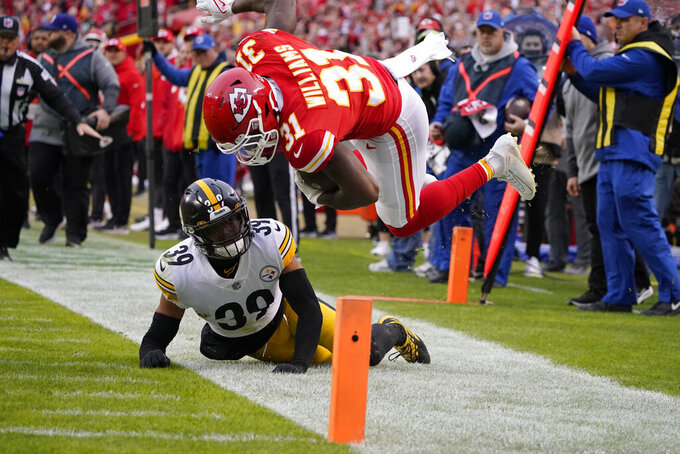 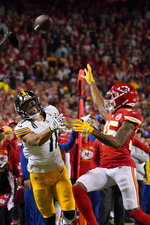 KANSAS CITY, Mo. (AP) — The Pittsburgh Steelers arrived at Arrowhead Stadium on Sunday with their playoff hopes beginning to fade.

Then, they played like a team ready to disappear into the offseason.

Ben Roethlisberger was picked off on a first-half flea flicker that helped Kansas City build a big early lead. Chris Boswell missed a field goal in the swirling wind. Diontae Johnson inexplicably dropped the ball for a fumble to start the second half. Roethlisberger also fumbled in the fourth quarter with the outcome already decided.

All the Chiefs had to do was cruise to a 36-10 victory that wrapped up their sixth consecutive AFC West title and left the Steelers even further behind the AFC North-leading Bengals with two games left in the regular season.

“I'll say it's just execution. Kind of dumb to blame it on anything else other than us when we're on week whatever — later in the season,” Steelers running back Najee Harris said. “It's about time we pointed at ourselves.”

The Steelers somehow managed to beat the Titans last week despite gaining 168 yards of total offense. They didn’t come close to pulling off the same trick in Kansas City.

The first half was a microcosm of the entire game: Pittsburgh punted twice after drives went nowhere, Roethlisberger was picked off on another, there was a turnover-on-downs and the team a missed a field goal before halftime mercifully arrived.

By that point, the Steelers (7-7-1) were in a 23-0 hole, becoming the first team in NFL history to trail by at least that many points at halftime in three straight road games. And lest anyone think they've been better at Heinz Field, the Steelers failed to score a touchdown in the first half of their fifth straight game for the first time since 1940.

“You know, we haven't done much on the road. We're taking too long to warm up to the environment and it's been an issue,” Steelers coach Mike Tomlin acknowledged. “It's a myriad of things that's going to require our attention.”

Consider the passing attack: Roethlisberger went 23 of 35 for 159 yards as the Steelers offensive line was dominated by the Chiefs' defense. It didn't help that his wide receivers kept dropping passes and making mistakes — Ray-Ray McCloud may have made the biggest one when he was called for taunting after a catch with his team trailing 30-0.

And then there's the running attack — Harris wasn't a whole lot more effective on the ground this week after being bottled up by the Titans last week. He carried 19 times for 93 yards Sunday, but most of that came with the game out of reach.

“When you look at all our wins, we win the game by not turning the ball over,” Harris said, “and we're starting to turn the ball over a lot. It's become a trend in us losing.”

Pittsburgh's defense watched the Chiefs march right down field on their opening drive and never slowed them down the rest of the game. Kansas City scored on its first four possessions to take a 23-0 lead, and it would have been 5 for 5 had fill-in kicker Elliott Fry not missed a 39-yard field goal wide left before the half.

Patrick Mahomes was 23 of 30 for 258 yards and three touchdowns, even though his tight end Travis Kelce is still on the COVID-19 list. Mahomes' numbers would have been more impressive, too, but the Chiefs were so far ahead midway through the fourth quarter that they put Chad Henne into the game to finish it out.

“We need to play a lot better football. It's pretty obvious right now,” said NFL sack leader T.J. Watt, who has been slowed by a rib injury. “We have to get in the film room and get corrected.”

With games left against Cleveland and Baltimore, time is running out.

“I don't think we've lost our confidence. I know I haven't lost my confidence,” Steelers safety Minkah Fitzpatrick said. “It doesn't matter whether we're up 40 or down 40. We're going to go out there and compete.”