Steelers look to figure out things against dangerous Broncos 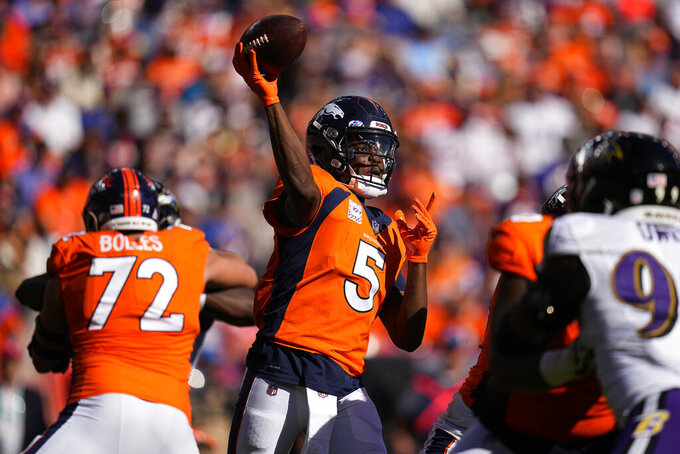 Denver Broncos quarterback Teddy Bridgewater (5) throws against the Baltimore Ravens during the first half of an NFL football game, Sunday, Oct. 3, 2021, in Denver. (AP Photo/Jack Dempsey)

OPENING LINE: Steelers by 1 1/2, according to FanDuel SportsBook.

TURNOVER DIFFERENTIAL: Broncos plus-2; Steelers minus-2.

BRONCOS PLAYER TO WATCH: WR Courtland Sutton blew out an ACL last year at Pittsburgh. He's tied with TE Noah Fant for the team lead with 18 receptions. Sutton is averaging 14.3 yards per catch but has yet to score.

STEELERS PLAYER TO WATCH: WR JuJu Smith-Schuster passed on an opportunity to join Kansas City or Baltimore in free agency to stay in Pittsburgh on a one-year deal believing he could put up big numbers. It hasn't happened so far. Smith-Schuster is averaging just 8.6 yards per reception.

KEY MATCHUP: Pittsburgh's offensive line against Denver's pass rush. The Steelers have allowed at least two sacks in each of their first four games and will have their hands full trying to contain Broncos LB Von Miller, who already has 4 1/2 sacks on the season.

KEY INJURIES: Broncos QB Teddy Bridgewater was in concussion protocol during the week after getting knocked out of last weekend’s game. CB Patrick Surtain II is dealing with bruised ribs but CB Ronald Darby could return from a pulled hamstring he suffered in the opener. The Broncos have lost 10 starters to injuries so far. ... Steelers QB Ben Roethlisberger is dealing with a hip injury in addition to a bruised left pectoral muscle. CB Cam Sutton is healing from a groin injury. RT Chuks Okorafor is returning from a concussion. WR Chase Claypool (hamstring) is expected to return after sitting out last week.

SERIES NOTES: The Broncos are one of the few AFC teams who have had their way with the Steelers through the years. Denver has won four of the last six meetings dating back to 2012 and is 4-3 against the Steelers when Roethlisberger starts. ... Pittsburgh escaped last year's meeting at Heinz Field when safety Terrell Edmunds sacked Denver QB Jeff Driskel on fourth-and-2 at the Steelers 15 with 1:55 to go. ... The teams have split 14 all-time meetings in Pittsburgh.

STATS AND STUFF: Bridgewater is one of two starting QBs (Russell Wilson) with no interceptions so far (minimum 50 pass attempts). ... Backup QB Drew Lock threw an end zone interception last week with 3 seconds left that allowed the Ravens to run one more play and tie a 44-year-old NFL record with their 43rd consecutive 100-yard rushing game. ... Rookie RB Javonte Williams leads all NFL rookies with 186 rushing yards. ... TE Noah Fant led with six receptions last week and has TD catches in two of his last three games. ... OLB Von Miller is one of two players in the NFL (Robert Quinn) to get at least a half-sack in every game so far. ... S Caden Sterns is the only rookie in the NFL with two sacks and an interception. ... The Steelers are looking to avoid their first 1-4 start since 2013 when they lost six of eight to begin the season and missed the playoffs. ... Pittsburgh's league-worst running game gained a bit of traction last week against Green Bay when rookie Najee Harris ran for a season-best 61 yards. The Steelers, however, have topped 100 yards rushing just once in their last 16 games and are 8-8 in that span. ... Pittsburgh's offense isn't the only thing struggling. The defense is ranked 16th overall through four weeks and is failing to consistently create turnovers. Pittsburgh's three takeaways rank in the bottom third of the league.

FANTASY TIP: Considering neither team is setting the world on fire offensively (especially if Bridgewater doesn't go) it might be wise to steer clear of position players and maybe turn to the specialists. Pittsburgh's K Chris Boswell has made at least one field goal in every game and last week made his 11th attempt from 50 yards or more, the most in franchise history.