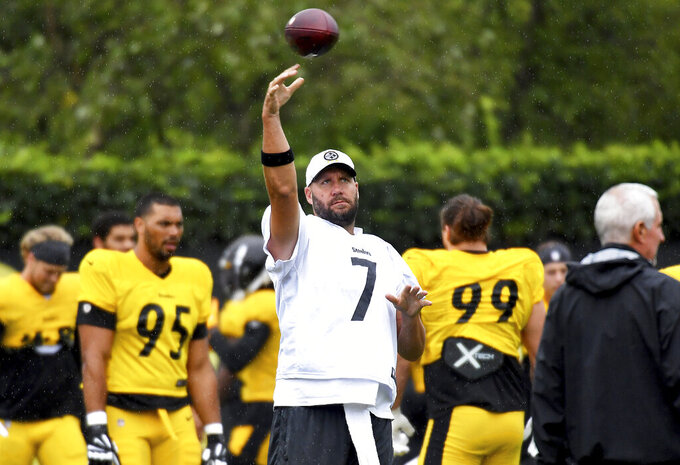 PITTSBURGH (AP) — Ben Roethlisberger has been doing this for a long time. A really long time.

So when the Pittsburgh Steelers quarterback asks his younger offensive teammates — and at this point in the 39-year-old's career, that's all of them by at least a decade — if they're nervous about Sunday's opener at Buffalo and they say no, he has a response at the ready.

“I call them a liar because I’m nervous,” the 18-year veteran said with a laugh.

The familiar faces that long protected Roethlisberger have moved on to the next stage of their lives. Longtime center Maurkice Pouncey retired during the offseason. Tight end Vance McDonald too. Right guard David DeCastro was cut. Left tackle Alejandro Villanueva now plays for Baltimore.

Together they combined for 17 Pro Bowls and countless post-touchdown hugs from their quarterback. In their place are new faces tasked with upholding the organization's standard of excellence.

No pressure or anything on Kendrick Green, Dan Moore Jr., Pat Freiermuth and Kevin Dotson. All they have to do is try and help revive a running game that finished last in the NFL in 2020. And protect a quarterback who took a pay cut in hopes of reaching a fourth Super Bowl. And learn the blocking schemes of a first-year position coach in Adrian Klemm and understand first-year offensive coordinator Matt Canada's system.

Oh, and do all of that while facing the league's hardest schedule, starting Sunday on the road against the defending AFC East champion Bills.

Perhaps just as important, how will they react in the moment? The excitable Green, a rookie third-round pick, is transitioning from guard to center. He's buried himself in film study over the last four months, trying to glean what he can from Pouncey, who approached his job with a gleeful violence Green is trying to emulate.

Green has set high expectations for himself. He's replacing a potential Hall of Famer. That can make the inevitable miscues that arise while playing at the sport's highest level difficult to shake.

“When I do something bad, I’m screaming at myself and stuff like that," Green said.

So much that Roethlisberger sometimes has to tell Green to snap out of it and move on to the next play.

“He gets on me about that sometimes,” Green said. “That’s something I need to work on, absolutely.”

Having too much “passion,” as Roethlisberger put it, is a far better problem to have than dealing with the opposite. He likes what he's seen from the line, which features three new starters in rookies Green and Moore (left tackle) and free-agent signee Trai Turner, who will take over for DeCastro at right guard. Kevin Doston moves to full-time starter status at left guard entering his second season, while Okorafor will be at right tackle after lingering right knee issues forced Zach Banner to begin the season on injured reserve.

Throw in Freiermuth — a second-round pick listed as a co-starter at tight end along with Eric Ebron following an impressive training camp — and the Steelers might as well have guys wear “Hi, my name is” stickers on their jerseys when they huddle up for the first time Highmark Stadium.

Not that the Steelers expect any sympathy from the Bills.

Which is where Canada comes in. The Steelers promoted the well-traveled assistant from quarterbacks coach to play-caller after parting ways with Randy Fichtner in January. Canada keeps stressing it's not his offense but the players'.

Maybe, but he was also given the mandate to take some of the pressure off Roethlisberger's surgically repaired right arm by bringing balance to an offense that's seen little of it over the last two years. The Steelers used the draft to address the problem, taking running back Najee Harris in the first round before grabbing Green, Moore and Freiermuth.

The fact all four will be in the lineup says a little bit about the depth concerns along the offensive line and a lot about the team's faith in the group.

“We’re not shying away from the four rookies,” Canada said Thursday.

Buffalo limited the Steelers to 47 yards rushing in a 26-15 victory last December, part of a 1-5 slide to end the season in which the Steelers became overly predictable.

That probably won't be the case Sunday. Not even Roethlisberger is sure what he has on his hands as he prepares for his franchise-record 234th game. It's kind of fun. Kind of.

“It may not be pretty early, and we have to accept that fact too,” Roethlisberger said. “At the end of the day, we just have to do what we have to do to win a football game.”