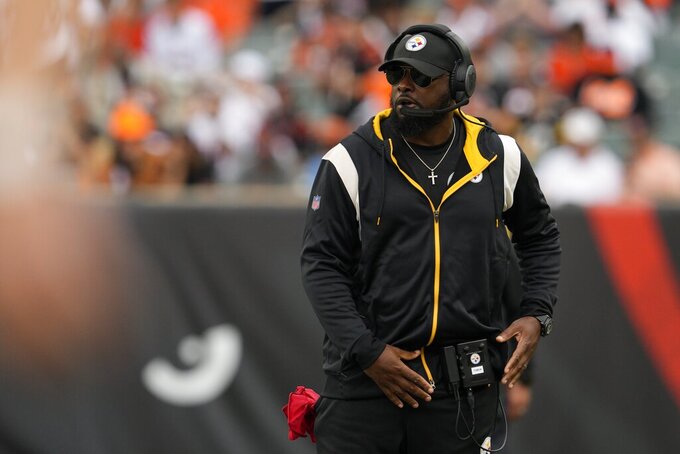 TURNOVER DIFFERENTIAL: Patriots minus-3; Steelers plus-5.

PATRIOTS PLAYER TO WATCH: CB Devin McCourty. The 35-year-old doesn't appear to have lost a step in his 13th season. He had six tackles last week against the Dolphins and allowed just one completion in pass coverage while playing all 60 defensive snaps. He'll face a young Steelers wide receiver group that features just player — Pro Bowl WR Diontae Johnson — over the age of 25. And Johnson is all of 26.

STEELERS PLAYER TO WATCH: S Minkah Fitzpatrick. The highest-paid safety in the NFL looked worth every penny in the season opener, returning an interception for a touchdown and blocking an extra point attempt by the Bengals that would have won the game at the end of regulation. Fitzpatrick's ball-hawking skills usually have a significant impact on the outcome. Pittsburgh is 8-2 when Fitzpatrick has an interception since he arrived in a trade with Miami early in the 2019 season.

KEY MATCHUP: Pittsburgh's offensive line against New England's front seven. The Steelers' revamped offensive front had mixed results in the opener. Pittsburgh struggled running the ball traditionally (the leading rusher against Cincinnati was wide receiver Chase Claypool) and had trouble giving quarterback Mitch Trubisky time to throw. New England's defense had three sacks in the opener against Miami and will need to put pressure on Trubisky if it wants him to make a mistake. Trubisky has yet to turn the ball over through four appearances (preseason included) with the Steelers.

KEY INJURIES: New England QB Mac Jones is expected to play despite dealing with back spasms. ... Patriots LB Ja'Whuan Bentley (toe) missed practice during the week. ... New England S Joshuah Bledsoe (groin) and Adrian Phillips (ribs), RB Pierre Strong Jr. (shoulder) and Shaun Wade (ankle) were limited. ... The Steelers will be without star linebacker T.J. Watt. The NFL's reigning Defensive Player of the Year is out indefinitely with a left pectoral injury. Malik Reed, acquired in a trade with Denver in late August, and Jamir Jones, claimed off waivers on Sept. 1, will fill in for Watt. Reed has 15 sacks since making the Broncos as an undrafted rookie free agent in 2019. ... Pittsburgh RB Najee Harris is expected to play after injuring his left foot late in last week's overtime win over Cincinnati. If Harris is limited, undrafted rookie free agent Jaylen Warren is next up on the depth chart. Warren had three carries for 7 yards in his NFL debut last week.

SERIES NOTES: This is the first time the teams will meet without Ben Roethlisberger and Tom Brady at quarterback since 1998. .... The Patriots have won 12 of the past 16 meetings (including playoffs) since Bill Belichick took over as head coach in 2000. ... New England is 10-11 in Pittsburgh, including a 6-3 mark at recently renamed Acrisure Stadium (formerly Heinz Field). ... Steelers coach Mike Tomlin is 3-8 against the Patriots.

STATS AND STUFF: This week’s game will mark the 500th of New England owner Robert Kraft’s era. Since he purchased the team in 1994, the Patriots have won six Super Bowls, have 341 wins, 19 division titles and .683 winning percentage, 33 playoff wins and 22 playoff appearances. … New England QB Mac Jones passed for 213 yards in the season opener to move into eight place on the Patriots all-time list with 4.014 passing yards and needs 263 to move past Hugh Milen (4,276) for seventh place. Jim Plunkett is in sixth place on the list with 9,932 yards. ... S Devin McCourty is tied with Baltimore’s Marcus Peters for the most INTs among all active players with 31. McCourty, Peters and Minnesota’s Harrison Smith are the only active players with at least 30. ... LB Matt Judon is one of five players with at least 90 quarterback hits since 2018, ranking third behind T.J. Watt and Aaron Donald. ... Pittsburgh is 16-5 in home openers at Acrisure Stadium. ... Steelers RB Najee Harris has yet to fumble in 393 touches, the 10th-longest streak to start a career in NFL history. ... Fitzpatrick is one of four players in NFL history with a Pick-6 in four of his first five seasons. ... Pittsburgh QB Mitch Trubisky is one of five signal-callers in team history to win a road game in his first start with the team. Trubisky's career record is 30-21, eighth among active NFL quarterbacks with at least 50 career starts. ... If things get tight, it could favor the Steelers. Pittsburgh is 9-2-1 in its past 12 games decided by eight points or fewer. ... Steelers WR Diontae Johnson has at least five receptions in 13 straight games, the second-longest active streak in the NFL behind Los Angeles Rams star Cooper Kupp.

FANTASY TIP: Given the way both offenses performed in their respective openers, might be wise to steer clear of this game in general. The better bets might be on the defensive side of the ball. While the Steelers defense is not the same without Watt, Alex Highsmith did a pretty good Watt impression last week while piling up a career-high three sacks. The Patriots were sloppy against Miami, turning the ball over three times. Now an aching Jones faces a defense that had five takeaways in Cincinnati.