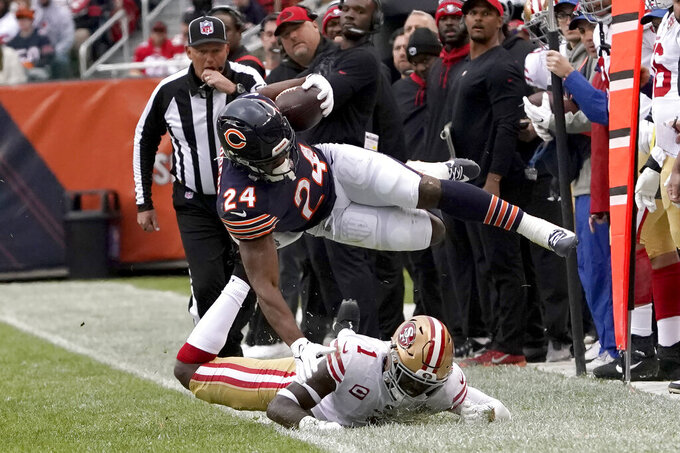 Chicago Bears running back Khalil Herbert (24) is knocked out of bounds by San Francisco 49ers free safety Jimmie Ward during the first half of an NFL football game Sunday, Oct. 31, 2021, in Chicago. (AP Photo/David Banks)

PITTSBURGH (AP) — Kendrick Green and Dan Moore Jr. were given a nearly impossible task when the Pittsburgh Steelers selected the offensive linemen in last April's draft.

The Steelers grabbed Green in the third round and moved him from guard to center, where all he had to do was replace perennial Pro Bowler Maurkice Pouncey. A round later they grabbed Moore, who by September found himself starting at left tackle.

No pressure or anything. All the Steelers asked Moore to do was protect 39-year-old quarterback Ben Roethlisberger's blindside in hopes of keeping Roethlisberger upright long enough to put together one last playoff push.

As their rookie seasons near the midway point, the early growing pains Green and Moore endured are starting to wear off. Something akin to cohesion has developed. The fact Pittsburgh (4-3) has righted itself following a 1-3 start is no coincidence.

The Steelers have won three straight heading into Monday night's visit by the struggling Chicago Bears (3-5), with a real legitimate chance to get into the thick of an AFC North race that appeared to be ready to go on without them a month ago.

While Moore gave up a sack to Cleveland star defensive end Myles Garrett last week and Green's chemistry with Roethlisberger remains a work in progress, the line created enough push in a 15-10 win over the Browns to have the running game top 100 yards for the third consecutive week after hitting that mark just once in the 16 games prior.

The unit has played so well together that right tackle Zach Banner has found himself on the inactive list each of the past two games even though he appears to be fully recovered from a torn ACL in his right knee suffered in the 2020 season opener.

Steelers coach Mike Tomlin insists he won't hesitate to put Banner back in the lineup, there also appears to be no indication that he's in a rush to do so.

It's the kind of first-world NFL problem the Bears would love to have. Instead, rookie quarterback Justin Fields has spent his first two months on the job mostly running for his life. Chicago has allowed a league-high 30 sacks, including four in each of its past three games, all double-digit losses.

Fields did find enough time to produce a season-best 278 yards of total offense last week against San Francisco, though much of his 103 yards rushing came after his protection broke down, including a spectacular 22-yard touchdown run that showcased why the Bears were so high on him last spring.

“I thought he played fast and made quick decisions,” Chicago wide receiver Allen Robinson said. “You can just tell as far as how he’s moving out there and moving around and what he’s seeing that he’s getting more comfortable and gaining more confidence.”

Fields will need more than confidence against Steelers star outside linebacker T.J. Watt, who has at least one sack in five of six games while forcing three fumbles and recovering two others.

If Watt and running partner Alex Highsmith get going, the Steelers will have a solid shot at giving coach Mike Tomlin his 149th regular-season victory, one more than his predecessor, Hall of Famer Bill Cowher.

The Steelers have won an astonishing 19 straight home games on Monday nights, a streak that started following a 23-20 loss to the New York Giants on Oct. 14, 1991. How long is that? Only four members of Pittsburgh's current active roster were alive on that day: Roethlisberger, defensive end Cam Heyward, cornerback Joe Haden and kicker Chris Boswell.

The run includes a 21-9 victory at Heinz Field in 2005 that kick-started an eight-game winning streak, culminating in a victory over Seattle in the Super Bowl.

“That was big,” said Roethlisberger, who was in his second season at the time. “We needed that one. It got us going.”

The Bears’ defense has gone from dominant to dominated.

Chicago ranks 15th in yards per game and 25th against the run after getting picked apart again last week, this time with star pass rusher Khalil Mack (foot) missing his first game since 2018. The Bears have allowed more than 400 yards and 30 points in back-to-back weeks.

“It’s not like we’re not good enough,” cornerback Jaylon Johnson said. “It’s not like we don’t have what it takes. It’s little keys, just little fixes, that make a big difference. My confidence is still through the roof in the guys and in myself and in the play-calling, just top to bottom, so we’ve just gotta keep fighting.”

Boswell left the win over Cleveland after going into the concussion protocol following a botched fake field-goal attempt. The Steelers are hopeful he can play, though they did sign former Jacksonville kicker Josh Lambo to the practice squad this week just in case.

Pittsburgh didn't attempt a kick in the second half against Cleveland, going for 2 points after both of its touchdowns. Tomlin laughed when asked what the contingency plan is next time the kicker is unavailable.

“I’m not gonna get into the division of labor,” he said. “I just want to hold my cards real close to my vest. Hopefully, we’re not in those circumstances again, but if we are, I don’t want to tip my hand.”