Steelers trying to get a grip on their 'virtual' reality 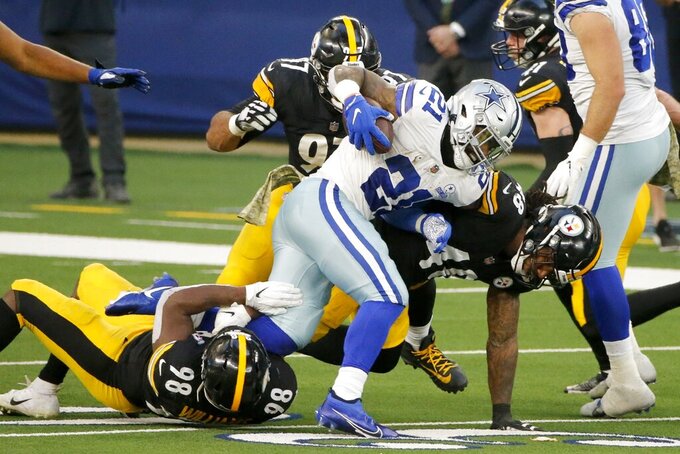 PITTSBURGH (AP) — The vibe is the same. The jokes. The freewheeling banter.

In that way, the daily meetings for the Pittsburgh Steelers' offensive line haven’t changed a bit even with the group being forced to get together over Zoom instead of in the same room, a move necessitated by the NFL's COVID-19 protocols.

Still, there is something offensive line coach Shaun Sarrett admits is lacking: the comfort in knowing he has each player's undivided attention as he tries to get a point across.

“When I am explaining something, I can’t look at the guy in the eyes,” Sarrett said Wednesday. “That’s the big thing. That’s just something we have to adapt to as coaches.”

In many ways, the NFL's first “virtual” offseason last spring prepared the Steelers for what amounts to a lockdown of sorts. Pittsburgh entered the league's “intensive” protocol last week when Baltimore defensive back Marlon Humphrey received a positive test result hours after the Steelers had edged the Ravens on Nov. 1.

They will remain in the protocol this week after tight end Vance McDonald tested positive following a victory over Dallas on Sunday that pushed Pittsburgh to 8-0.

McDonald was placed on the league's COVID-19 list on Monday. Quarterback Ben Roethlisberger, linebacker Vince Williams, running back Jaylen Samuels and backup offensive lineman Jerald Hawkins joined him on the list Tuesday as a precaution after league-mandated contact tracing.

That means Hawkins is logging in from home as Sarrett fine-tunes the line's approach to facing AFC North rival Cincinnati (2-5-1) on Sunday.

Sarrett praised Hawkins for being “in tune” and stressed he has full trust that Hawkins — who is frequently used as an extra blocker in short-yardage situations — is doing everything he can to prepare for the Bengals.

It’s less than ideal. Then again, the same could be said about many things in 2020.

“We just have to move forward because come Sunday, there’s not going to be any excuses in this stuff,” Sarrett said. “The only thing people want to see is the results, the ending results, and that’s what we have to do. We have to go out and produce.”

It helps that Sarrett and the rest of the coaching staff have successfully navigated the steep technological curve that came with getting adjusted to the software required to simulate a normal teaching environment. That doesn't mean it's fun.

Asked about the biggest difference between a normal meeting and a virtual meeting, defensive line coach Karl Dunbar laughingly suggested not being together in person messes with his players' nap schedules.

“Sometimes they be sleeping on me (in person)," Dunbar said.

Not exactly. Defensive tackle Cam Heyward pointed out there are no naps during the meetings because Dunbar's players are too busy “giving him hell.” Maybe, but Dunbar admits he misses the intimacy of being inside the same four walls with Heyward and the rest of one of the NFL's best defensive lines.

“Coaching, just like most things with football, is personal and it’s interactive,” Dunbar said. “And you don’t have that when you go virtual. But this is the only way you can do it because it’s 2020, and we have to learn how to do it.”

If anything, going virtual has brought about an even higher level of personal accountability. If Dunbar goes over something on video and you inadvertently miss it, there's no nudging of a teammate to ask for help.

“It’s tough, the virtual meetings,” Heyward said. “But I thought guys asked questions (today), continued to stay involved and then we got on the field, we were able to address the questions right then and there and then hit the field in stride.”

Still, Heyward is doing what he can to help fill in the gaps for a group that is currently missing injured veterans Tyson Alualu and Chris Wormley. Second-year player Isaiah Buggs and rookies Henry Mondeaux and Carlos Davis filled in and Heyward is trying to help them get up to speed despite the restrictions.

No wonder Dunbar likens the 10-year veteran and longtime defensive captain to his unit's “Paul Revere.” Heyward smiled at the reference but stressed he's just doing his job, particularly during a season where the usual preparation methods are limited if they even exist at all.

“In this time, you’ve had to be more communicative and make sure it doesn’t just get lost in translation, we’re not just saying things,” Heyward said. "I want everything I say to be meaningful and then be able to be an outlet to the guys, whether they have concerns about what’s going on or what they're seeing on the field. And just, I’ve seen things they haven’t seen yet. If I can always lend an extra hand or point them in the right direction, I try to.”