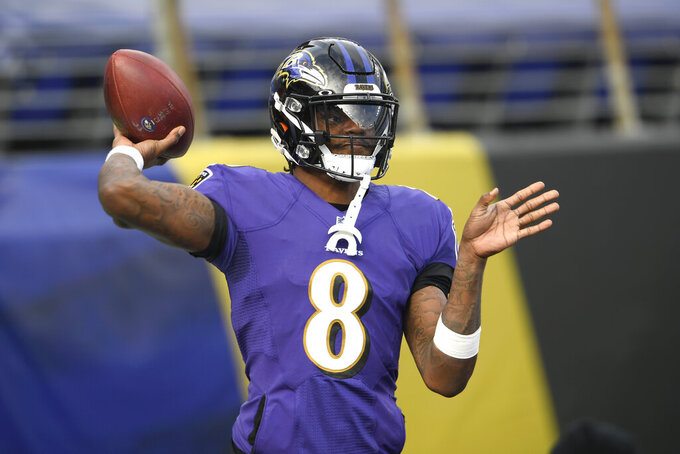 BALTIMORE (AP) — The Baltimore Ravens have won three straight and are playing well enough to sweep their final two games and finish with an admirable 11-5 record.

Unfortunately, that still might not be good enough to get them into the playoffs for the third year in a row. The Ravens need some help, and it might have to come from their biggest rival — the Pittsburgh Steelers.

The Steelers face the Colts this Sunday and close against the Browns. If Pittsburgh wins either of those games and Baltimore defeats the New York Giants and Cincinnati, the Ravens are in.

So, for two weeks at least, Ravens coach John Harbaugh is going to be (gulp) rooting for the Steelers.

“Of course. We want to get in the playoffs," Harbaugh said Monday. “We know that we need some help, but the focus really for us is going to be on taking care of our business. It doesn't matter what anybody else does if we don't take care of our job. We can control how we play, and we have to play our best football."

After negotiating an outbreak of COVID-19 at their training facility and losing three straight along the way, the Ravens rebounded to play at a high level over the past three weeks. They thumped Dallas 34-17 before winning a thriller at Cleveland and dominating the overmatched Jaguars.

“This team is resilient. Definitely, we persevere," said defensive tackle Brandon Williams, who missed time with an injury and while on the reserve/COVID-19 list. “We’re grinders, and we keep balling no matter what. We don’t get fazed. We don’t flinch. That’s what I love about this team — we’re a bunch of warriors, and we go out there and do what we have to do."

That's why it's hard to imagine a letdown against the Giants (5-9) and Bengals (2-10-1 before facing Pittsburgh on Monday night).

“We’ve just got to keep focused on what we have in front of us," quarterback Lamar Jackson said. “We’ve got the Giants in front of us now."

What didn't? Jackson threw three touchdown passes and ran for a score, and the defense rebounded from a soft performance in Cleveland to blank the Jaguars in the pivotal first half.

The secondary played well despite the absence of injured starters Marcus Peters (calf) and Jimmy Smith (shoulder). In addition, backup cornerback Davontae Harris left with an injury during the game.

Defensive coordinator Don Martindale had done well by plugging in reserves, but he'd love to see the unit fully healthy down the stretch.

Dez Bryant's return to the NFL reached its zenith Sunday when the 32-year-old receiver scored his first touchdown since December 2017 while with the Cowboys.

Humble was not a word associated with Bryant during his days in Dallas, but that's how he's coming across in the second stage of his career.

“One thing that I do love about this team is it’s real team ball. When one succeeds, we all succeed," he said. “I’m not scoring that touchdown (without) the belief of those guys, the belief they had in me.”

Not only did Mark Ingram lose his starting job, he was a healthy scratch Sunday while on the inactive list.

Ingram, who turned 31 on Monday, has fought through an ankle injury and COVID-19 issues. He is now behind J.K. Dobbins and Gus Edwards on the depth chart.

“There are just a series of circumstances that led us to this place, where the guys that are running the ball are really having a lot of success," Harbaugh said. “It's a good problem to have for us as a team, but I know Mark wants to be out there carrying the rock."

Offensive lineman Tyre Phillips hopes to recover from a concussion he received at the end of a highlight-reel run of 22 yards with a fumble that got Baltimore a first down in the fourth quarter. He got a headache and a game ball for his effort.

800 — Jackson is the first quarterback in NFL history to rush for 800 yards in successive seasons. He and Michael Vick (2004, 2006) are the only quarterbacks to accumulate 800 yards rushing in two separate seasons.

The Ravens wrap up their home schedule Sunday against the Giants, looking for their eighth straight win at home in December and 13th in 14 games. Their 12-2 overall record in the month since 2018 is the best in the NFL.