Titans have No. 26 pick overall to give Tannehill more help 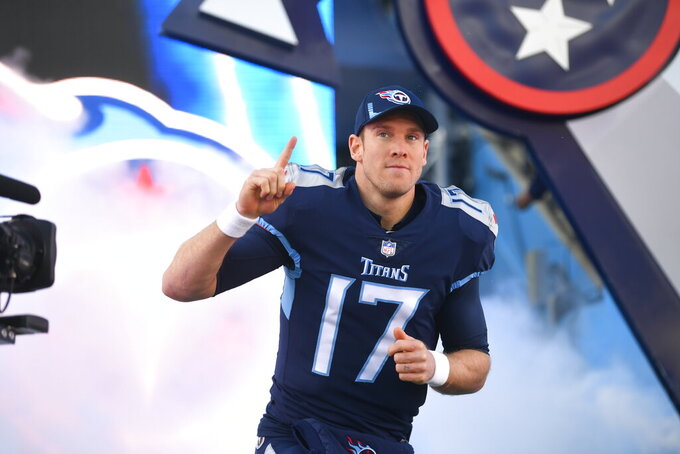 FILE - Tennessee Titans quarterback Ryan Tannehill takes the field before an NFL divisional round playoff football game against the Cincinnati Bengals Jan. 22, 2022, in Nashville, Tenn. Tannehill has been the easy scapegoat for fans angry that the Titans’ Super Bowl hopes ended in the divisional round. (AP Photo/John Amis, File)

NASHVILLE, Tenn. (AP) — Ryan Tannehill has been the easy scapegoat for fans angry that the Tennessee Titans' Super Bowl hopes ended in the divisional round.

Coach Mike Vrabel made clear after the loss by the AFC’s No. 1 seed that the Titans must help Tannehill by being “excellent” around their quarterback.

Tennessee general manager Jon Robinson has tried to give Tannehill more offensive playmakers, signing tight end Austin Hooper and trading for wide receiver Robert Woods in free agency. Now he has the No. 26 pick overall along with six other selections in the upcoming NFL draft to add some more talent on offense.

“Certainly (the draft) is a big component of that ...” Robinson said. “Being able to infuse younger players into your football team, guys that you can kind of build on, add to the foundation. But again ... we’re trying to get as many good football players really at every position as we can as possible.”

The Titans took a big swing at helping Tannehill last summer, trading for seven-time Pro Bowl wide receiver Julio Jones. That didn't work out with Jones released as a cap casualty in March.

A big challenge this offseason has been the cap figure for Tannehill himself, boosted by reworking his deal to free up space for the Titans last summer to sign Jones. He now has a $38.6 million salary cap hit, the largest in the NFL for this season.

A.J. Brown, in the final year of his rookie deal, wants part of the skyrocketing wide receiver market. Brown did not show up for the start of the offseason program, but Robinson said they have no intention of trading him before the draft. The GM spoke to Brown a couple of weeks ago and made clear the Titans want him.

"Sometimes you have to make decisions that you think are best for the team," Robinson said. "Sometimes it works out. Sometimes it doesn’t. But we’re glad Ryan’s here, excited to work with him and we’ll deal with you know, I feel pretty confident with Vin (Marino) and his ability to work the pencil on the cap numbers.”

Adding Woods and Hooper to the offense certainly eases the pressure on both Tannehill and Brown. The Titans still need receiving depth with the Jones' trade a bust. The top receiver now is Nick Westbrook-Ikhine, who started seven games in 2021 and was second to Brown with 38 catches for 476 yards receiving.

Tight end Anthony Firsker, who was third with 34 catches, now is in Atlanta. The Titans signed tight end Geoff Swaim to a new deal and brought in Hooper, a two-time Pro Bowl tight end his past two seasons in Atlanta, on essentially a one-year deal.

Protecting Tannehill is a priority after giving up 47 sacks last year. The Titans cut left guard Rodger Saffold and reserve Josh Klein to clear cap space in March and signed Jamarco Jones as a cheaper option. They also signed center Ben Jones to an extension.

Dillon Radunz, a second-round pick a year ago, is expected to compete for more playing time.

Needing to both protect Tannehill better and open holes for Derrick Henry, that makes adding depth on the offensive line a priority especially after injuries cycled through the unit last season. That makes a guard Kenyon Green of Texas A&M or Boston College's Zion Johnson options at No. 26.

A year ago, Robinson needed to fix a defense that was one of the NFL’s worst in 2020. He did just that by adding linebacker Bud Dupree, defensive lineman Denico Autry and cornerback Jackrabbit Jenkins. He also tried to help Tannehill, Henry and Brown by trading for Jones.

That leaves the Titans in strong shape, returning 10 of 11 starters. Robinson signed linebacker Harold Landry III to an extension, and defensive lineman Jeffery Simmons should have his fifth-year option picked up by the May deadline. Safety Kevin Byard is coming off an All- Pro season.

Caleb Farley, their top draft pick a year ago, is recovering from a torn ACL that ended his rookie season. He is expected to start with Jenkins another salary cap cut.

Robinson has a history of drafting players coming off injuries. He selected Simmons at No. 19 overall in 2019 with the lineman having torn an ACL in February, and he took Farley at No. 22 last year with the cornerback coming off back surgery the month before.

That makes Alabama wide receiver Jameson Williams an option at No. 26 if he falls that far. The Titans also could go for Arkansas receiver Treylon Burks with Green or Johnson options on the offensive line.