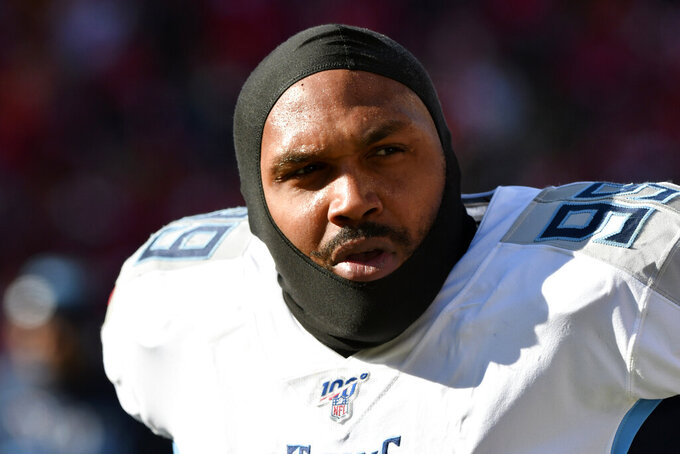 FILE - In this Jan. 19, 2020, file photo, Tennessee Titans defensive end Jurrell Casey is shown before the NFL AFC Championship football game against the Kansas City Chiefs in Kansas City, Mo. Casey is retiring from the NFL after 10 seasons, the first nine with the Tennessee Titans and the last with Denver. Casey scheduled his announcement for Thursday, Sept 2, 2021 at Nissan Stadium where he became a five-time Pro Bowl pick, six-time defensive captain and a two-time Walter Payton NFL Man of the Year. (AP Photo/Ed Zurga, File)

NASHVILLE, Tenn. (AP) — Defensive tackle Jurrell Casey says his body helped him make the hard decision to retire from the NFL after 10 seasons, the first nine with the Tennessee Titans and the last with Denver.

“The body itself told me what it’s going to be,” Casey said Thursday at a news conference. “And I couldn’t keep going out there and damaging myself and not be there for my family for the long haul. So I made the decision to go ahead and call it quits.”

Casey made his announcement at Nissan Stadium, where he became a five-time Pro Bowl pick, six-time defensive captain and a team two-time Walter Payton NFL Man of the Year. His 51 sacks rank seventh in team history and are second only to Jevon Kearse's 52 sacks since 1999 in the Titans era.

Titans controlling owner Amy Adams Strunk congratulated Casey on his career, saying there was no greater model for what a player can do on and off the field than Casey. On the field, she said he was a force helping rebuild the franchise's culture of success capped by being a captain of the 2019 team that reached the AFC championship game.

General manager Jon Robinson, who traded Casey to Denver in March 2020, said it was easy to see the tackle's passion for football, dedication to his teammates, his leadership and skills — along with his dominance on the field. He called him a “Titan for life" after an outstanding career.

Casey started 140 of 142 career games with 51 sacks, 59 tackles for loss, 19 passes defended, eight forced fumbles and five fumble recoveries. He missed only five games with the Titans as the 77th pick overall in the third round of the 2011 draft out of Southern California.

After the Titans traded him to Denver, Casey played three games before a biceps injury ended his season, and the Broncos released him in February.

Casey had at least five sacks in seven straight seasons through 2019 with his best season in 2013 when he had a career-high 10 1/2 sacks.

He also founded The Casey Fund with his wife, Ryann, to support organizations helping at-risk youth and former prisoners.