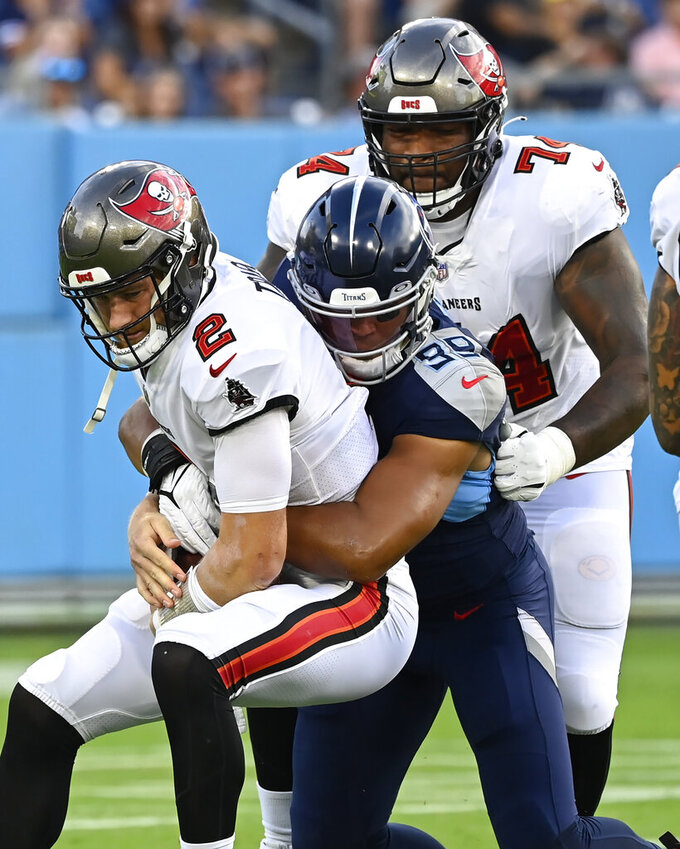 NASHVILLE, Tenn. (AP) — The Tennessee Titans are days away from kicking off their new season and already have placed two players on injured reserve.

One advantage the Titans have as they prepare to host the New York Giants on Sunday is this isn't the first time they've leaned heavily on that next man up mentality. They earned the No. 1 seed in the AFC last season using an NFL- record 91 different players, most in a non-strike season, with 26 on injured reserve.

“Just because Harold went out does not mean that we’re going to be looking at ourselves like, ‘Hey, we’re not going to be able to be the type of team or type of defense that we were capable of,’” safety Kevin Byard said Monday. “We’re going to expect, and we’ve always expected, for backups to play like starters.”

The Titans had five starters go on and off injured reserve last season, not counting first-round draft pick Caleb Farley. The cornerback tore an ACL in his lone start.

Yet Tennessee still finished sixth in the NFL in scoring defense, second in run defense and was the only team in the league with three different players to have at least eight sacks apiece. Landry, who started every game the past three seasons, earned his first Pro Bowl nod with a career-high 12 sacks last season.

That earned him a five-year contract this offseason after Landry ranked 10th in the NFL with his 12 sacks. He has a team-high 31 sacks over the past four seasons. Landry’s total is the second most for this franchise over his first four seasons since 1982 when individual sacks became an official NFL statistic.

Giants first-year coach Brian Daboll sent his sympathies to Landry, someone he called a fantastic and dynamic player.

“We don’t exactly know what’s going to happen, whether (Denico) Autry is going to move over there, whatever it may be,” Daboll said. "You know, the first game, you have to rely on your rules and things that you did for training camp. And that’s where our focus will be.”

Landry would have faced Giants rookie right tackle Evan Neal, the seventh overall pick out of Alabama, before tearing an ACL in practice Aug. 31. The Titans now could start second-year linebacker Rashad Weaver in Landry's spot. Weaver broke a leg in his third game in ending his rookie season.

One advantage for the Titans is Bud Dupree, their big free agent signee of 2021, finally feels like himself after spending last season recovering from the ACL he tore in December 2020 playing with Pittsburgh. Dupree started six of 11 games, letting his pride push him harder than he was ready. He finished with three sacks.

Dupree said he didn't feel like himself until this summer. The Titans signed linebacker Derrek Tuszka to the roster.

“It’s unfortunate. It’s disappointing,” Titans coach Mike Vrabel said. “Feel terrible, obviously, for Harold and the work that he’s put in and his value to our football team. But we have to move on and get everybody ready to go in.”

NOTES: Josh Gordon, signed to the Titans' practice squad Sept. 1, practiced Monday. He said he's been working with wide receivers coach Rob Moore to catch up on the playbook. ... CB Elijah Molden and DB Lonnie Johnson Jr. were not seen in the open portion of practice.