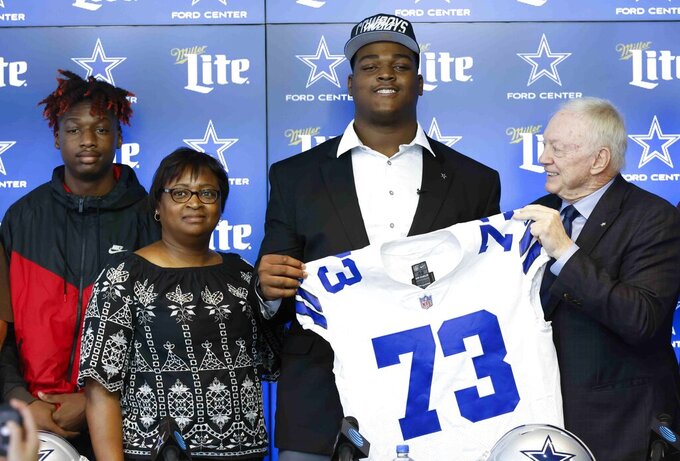 FRISCO, Texas (AP) — The four positions with the most significant losses for the Dallas Cowboys this offseason matched the club's first four picks in the draft.

Third-round pick Jalen Tolbert joins a receiving group that is replacing Amari Cooper. Dak Prescott's top target was traded to Cleveland in a cost-cutting move, and Dallas also lost a key to its depth in free agent Cedrick Wilson (Miami).

The first choice of the final day Saturday was Wisconsin tight end Jake Ferguson in the fourth round as the Cowboys move on from Blake Jarwin, who was released because of career-threatening hip issues two years after signing a lucrative deal.

Executive vice president of personnel Stephen Jones said before the draft the Cowboys didn't have any “musts.” But he acknowledged two days in that they were addressing needs.

“I don’t think it’s by accident that we ended up picking (positions) where we were picking,” Jones said. “The good news is that there are some good players there that you have to just sort out where the groupings are going to fall.”

Owner/general manager Jerry Jones said Smith was the 16th player on the board for Dallas, which had the 24th overall pick. Stephen Jones said the Cowboys had first-round grades on 14 players, lower than normal.

While Dallas ended up with more of a project in Smith compared to a pair of guards who were already gone in Zion Johnson of Boston College and Texas A&M's Kenyon Green, Jerry Jones said the Cowboys had Smith, a tackle at Tulsa, rated higher.

“Can you see that?” Jerry Jones said on the opening night of the draft as he turned a piece of paper listing the Dallas preferences toward reporters, with son Stephen wishing he hadn't. “I’m dead serious. We really did have both of them rated below him.”

The Cowboys said they drafted Williams before Tolbert because they thought there was a better chance Tolbert would still be available in the third round. They were right.

“I do think we felt like we could use help in those areas,” Stephen Jones said. “We didn’t know what order we would address them. It has kind of fallen right for us.”

BUSY IN THE FIFTH

Because of the extra year of college eligibility given to players through the pandemic-altered 2020 season, Stephen Jones said he considered the fourth and fifth rounds “the meat of the draft.”

“Our biggest rounds were the fourth and fifth rounds in terms of numbers that we have in those rounds,” Jones said.

Clark was projected as a higher pick before undergoing spinal fusion surgery about a month before the draft. A herniated disk was discovered by an MRI at the combine.

The Cowboys made a similar move, although much higher in the second round, with Notre Dame linebacker Jaylon Smith in 2016. Smith tore two ligaments in his left knee in his final college game, an injury that also damaged nerves.

Smith didn't play as a rookie in Dallas before a solid season two years later that led to a second contract. He was released midseason last year.

There have been reports that Clark isn't expected to play as a rookie, either, but Stephen Jones said the Cowboys aren't ready to say the LSU product will be sidelined all of 2022. Clark will start the season on the physically unable to perform list.

“This is a guy who works, works, works,” Stephen Jones said. “Football’s very important to him, very committed to getting back.”

Ferguson, the grandson of former Wisconsin coach and athletic director Barry Alvarez, said his granddad has “actually been the least crazy one in my family.” Naturally, that led to the question of who is the craziest. Answer: Alvarez's daughter — his mom.

“She's just going all over the place,” Ferguson said. “She sent out this mass text about how nobody is allowed to call her. Somebody called her the first day (of the draft), and she was freaking out that it was a team. I was like, ‘There’s no way I'm going in the first round.' She was yelling at everybody.”

Dallas' choice was Oklahoma State linebacker Devin Harper in the sixth round. The Cowboys finished with four consecutive defensive picks after four of the first five were on offense.