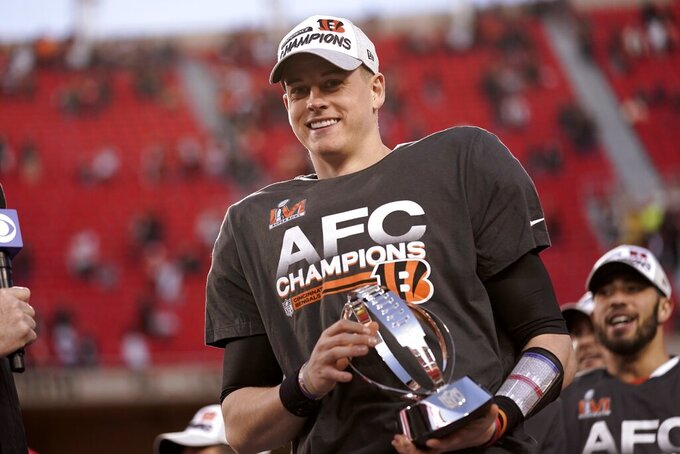 A rare Super Bowl meeting between No. 1 pick quarterbacks provides quite a contrast for their paths.

Stafford and Burrow will be the 10th and 11 quarterbacks among the 26 taken with the top pick in the common draft era to start in the Super Bowl.

This marks just the second time in NFL history that No. 1 pick QBs squared off in the Super Bowl, with Peyton Manning and the Broncos beating Cam Newton and the Panthers six years ago.

Manning is one of just six former No. 1 pick quarterbacks to start and win a Super Bowl, having done it with his original team in Indianapolis and then again in Denver.

The only other ones to do it with the team that drafted them like Burrow is attempting to do are Troy Aikman and Terry Bradshaw. Eli Manning and John Elway won where they began their careers, but were acquired by the Giants and Broncos in trades after being picked by the Chargers and Colts.

The other No. 1 pick champion was Jim Plunkett, who won two titles for the Raiders after being drafted by New England.

Burrow has gotten to the Super Bowl faster than any other No. 1 overall pick, doing it in his second season. Jared Goff got there for the Rams in his third season, while Eli Manning, Drew Bledsoe, Troy Aikman and John Elway all got there in year four.

A win on Sunday would put Burrow in some special company, joining Tony Dorsett, Charles Woodson and Reggie Bush as the only players to win a Heisman Trophy and national championship in college, along with a Super Bowl in the pros.

Stafford had a much longer wait to get to this stage, taking until year 13 to get to the Super Bowl — longer than any other top pick who eventually made it that far. Stafford's 49,995 yards passing and 323 TD passes are the most for a QB making his first Super Bowl appearance.

If Stafford wins on Sunday, it would be the second-longest wait for a QB to win his first Super Bowl, trailing only Elway who won his first in his 15th season after losing three times.

Burrow and Stafford also got here after leading the NFL in sacks and interceptions, respectively. Burrow is the first QB to make it to the Super Bowl after getting sacked the most in the regular season.

There will be a youthful tinge to the Super Bowl coaches this week. A year after the game featured a pair of coaches in their 60s in Andy Reid and Bruce Arians, this year's matchup will be the youngest ever.

Zac Taylor, 38, takes on Sean McVay, 36, in the first Super Bowl ever with two coaches younger than 40 years old. Their combined age of 74 years, 299 days on Sunday is nearly nine years less than Mike Tomlin and Ken Whisenhunt had 13 years ago (83 years, 296 days).

The Bengals have put together an impressive turnaround season.

San Francisco pulled off the feat in 2019, bouncing back from a 4-12 mark to make it to the title game. Both the Niners and Bengals lost in the Super Bowl.

The Rams are the only team to finish off that kind of turnaround with a championship. They improved from 4-12 in 1998 to 13-3 the following season before beating Tennessee for their only Super Bowl win in franchise history.

McPherson has gone 4 for 4 on field goals in all three games, tying Adam Vinatieri for the most career playoff games with at least four made field goals.

McPherson's 12 makes so far this postseason are two shy of Vinatieri's single-year record set in the 2006 season.

McPherson has already set the NFL record by making 12 field goals from at least 50 yards in the regular season and playoffs combined.

This will be the first Super Bowl since the NFL started seeding teams in 1975 that won’t feature either of the top seeds in either conference.

The fourth-seeded Rams will face the fourth-seeded Bengals, guaranteeing that the winner will be the sixth fourth seed to hoist the Lombardi Trophy. The Ravens were the most recent to do it in the 2012 season.