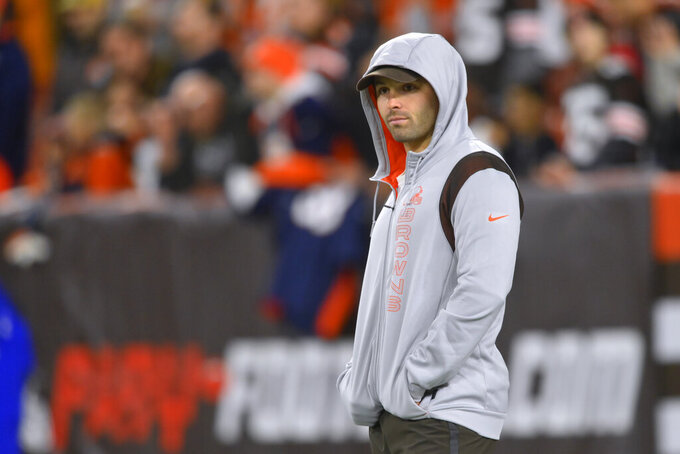 CLEVELAND (AP) — The last time Ben Roethlisberger played the Browns, his night began with a frantic chase after the ball was snapped over his head into the end zone. He ended it sitting on the bench contemplating his future.

On Sunday, the Steelers quarterback returns to the rivalry he tilted decidedly for nearly two decades.

The Steelers (3-3) swear they won't have vengeance in mind as much as keeping their season rolling in the right direction when they face the Browns (4-3), who put an exclamation point on their turnaround in January by winning at Pittsburgh in the playoffs.

Cleveland's 48-37 wild-card victory — a game quarantined Browns coach Kevin Stefanski watched from his home basement after a positive COVID-19 test — was the Browns' first in the postseason since 1994 and seemed to signal that one of pro football's fiercest football feuds was evening out some.

And although he's 24-2-1 against the Browns since 2004, Roethlisberger, who grew up in Ohio and is nearing the end of his Hall of Fame career, feels his personal record doesn't reflect the permanent competitiveness in the Cleveland-Pittsburgh series.

“I don’t know this rivalry ever went away,” he said. “Rivalries are great.”

And just to add some spice to this matchup, Roethlisberger took a playful swipe at the Browns by extolling his dominance over them while pointing out Cleveland's many struggles in recent years.

“I'm just glad I’m not the most winning quarterback in their stadium history anymore,” he cracked.

Roethlisberger hasn't said if this will be his last season. Whether it is or not, he won't be making many more trips to Cleveland, where he has gone 11-2-1 and in some ways symbolized the Browns' lack of success as a player they passed on in the draft.

How different things could have been.

The roles were reversed in last season's playoff meeting as Roethlisberger couldn't recover the early errant snap, which the Browns recovered for a TD just 14 seconds in and built an almost unimaginable 28-0 lead.

Steelers coach Mike Tomlin said his team won't use that loss, painful as it may have been, as motivation.

“We’ve got a lot riding on this game,” he said. "We’re going to play a really good team in their venue. It’s 2021. ... In the game of football, things change year in and year out and seemingly low-hanging fruit is oftentimes irrelevant to some of the people in the room.

“We don’t spend a lot of time talking about old stories or old news.”

Mayfield, who has a torn labrum and fracture in his nonthrowing shoulder, practiced this week with a new stabilizing harness anchoring his injured left shoulder, which has become something of a focal point for Cleveland's season.

Mayfield understands the risk in exposing his shoulder to Steelers sack specialist T.J. Watt, but he's determined to stay on the field.

“I’m not about missing practice or playing time,” he said.

If Mayfield gets hurt again, the Browns can turn to Case Keenum, who led the Browns to a win over Denver.

Browns offensive coordinator Alex Van Pelt was asked how much confidence he has in Keenum.

Pittsburgh’s offensive line could be bolstered by the return of right tackle Zach Banner. The 6-foot-8, 358-pounder, who spent 2017 with the Browns before signing with the Steelers the following year, hasn’t played in a regular-season game since tearing his right ACL in the 2020 opener against the Giants.

The energetic Banner could also give a low-key unit a needed dose of swagger.

“He brings passion and fire,” Roethlisberger said. “For a lineman, sometimes the heart that you bring can be stronger than your talent. With a guy that’s got all kinds of heart and passion and fire for this team and for protecting the quarterback, it’s never a bad thing to have."

With Nick Chubb and Kareem Hunt out injured last week, the Browns' backup back rushed for 146 yards and a touchdown in his first career start. It was an unforgettable night for Johnson, who briefly worked on a fishing boat and texted the social media accounts for every team in the Alliance of American Football League daily while hoping for a tryout.

He has always been relentless.

“My whole life growing up, I don’t want to be denied about anything,” he said. "I just tried to make things happen.”

The Steelers have struggled — by their standards — with stopping the run, due in part to a defensive line ravaged by injuries. End Stephon Tuitt is still recovering from knee surgery and tackle Tyson Alualu fractured his ankle last month.

While Cam Heyward continues to play at a high level in his 11th season, the depth around him has been tested. Seattle ran for 144 yards two weeks ago even with quarterback Russell Wilson and starting running back Chris Carson both out.

Pittsburgh’s run defense will be tested by the NFL’s best rushing attack — and a healthy Cleveland line.