Tua is rolling for Miami, while Giants have backup at QB 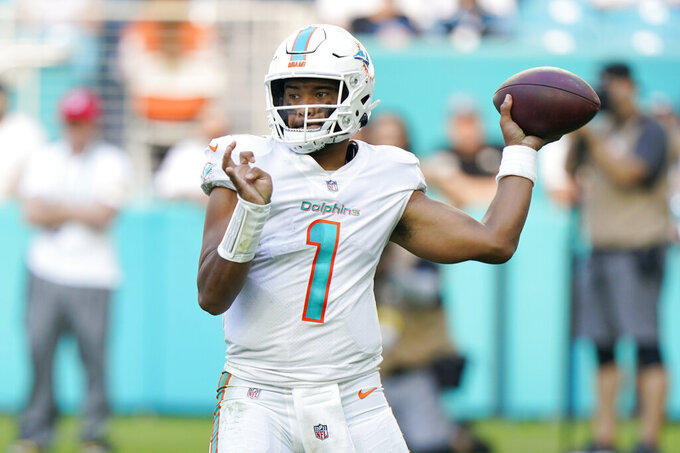 Miami Dolphins quarterback Tua Tagovailoa (1) aims a pass during the second half of an NFL football game against the Carolina Panthers, Sunday, Nov. 28, 2021, in Miami Gardens, Fla. (AP Photo/Wilfredo Lee)

MIAMI GARDENS, Fla. (AP) — Take all the passers in NFL history who have attempted at least 75 throws in a month, and nobody was ever more accurate than Peyton Manning was for Indianapolis in December 2008.

Tua Tagovailoa can’t miss right now, and the Miami Dolphins suddenly can’t lose. He completed 80.5% of his throws in November, the second-best month in NFL history in terms of accuracy, and the Dolphins (5-7) will seek a fifth consecutive win on Sunday when they play host to the New York Giants (4-7), who will be without starting quarterback Daniel Jones because of a neck injury.

“It always feels good winning, but the thing we can’t do as a team is be satisfied with the win the previous week,” Tagovailoa said. “That’s the game of football that we play. You enjoy it for that day, that night, come into work, learn from your mistakes and then you’re really moving forward from it. I would say if you can’t do that, it’s hard for you to stack together good days.”

Rib and finger injuries that derailed him earlier this season are essentially in the rear-view mirror now. He was 62 for 77 passing in November, meaning he was just one completion away from matching Manning’s best-month record for accuracy.

“You see Tua’s progression and how consistent he’s been in terms of his completion percentage,” Giants coach Joe Judge said. “He’s doing a really good job of getting the ball moving, staying ahead of the sticks, sitting out there with a lot of time of possession and helping this team go.”

The Giants aren’t sure who’ll make them go this week.

Jones was ruled out on Friday with a strained neck because he had not been cleared for contact. Veteran Mike Glennon will start and be backed up by Jake Fromm, who was signed off the Buffalo practice squad earlier in the week.

Jones was hurt against the Eagles on Sunday in a 13-7 win but he did not miss any snaps. He practiced on a limited basis this week.

The Dolphins are trying to become the fourth team in NFL history to go from 1-7 to 6-7. It’s a path the Giants nearly took last year when they went from 1-7 to 5-7 in Judge’s first season.

Dolphins coach Brian Flores has been close with Judge and some other Giants coaches for years, primarily because of their times together as assistants in New England. And Flores credits Judge for helping him become a better coach.

“Joe is somebody I definitely learned from and he’s got a Ph.D in education, so he knows how to teach,” Flores said. “I don’t think people know that. But at the end of the day, coaching is teaching and I learned some teaching methods from him.”

This is the start of the Dolphins playing three consecutive games against ‘New’ teams — the Giants, followed by a Dec. 19 matchup with the New York Jets and then a Dec. 27 game at the New Orleans Saints. When adding New England to the mix, the Dolphins will play six games against ‘New’ teams this season. In the current NFL era, no team has ever done that in a regular season.

Last week was Freddie Kitchens’ debut calling the offensive plays for the Giants. He got the job when Joe Judge fired coordinator Jason Garrett after a dismal performance against Tampa Bay. RB Saquon Barkley got 17 touches but managed only 53 yards, and 32 of those yards came on one carry. It was very methodical; 30 passes, 27 rushes for the Giants last week.

Nickel back Darnay Holmes (ribs) and starting cornerback Adoree Jackson (quad) were both hurt in the win over Philadelphia. That means Giants defensive coordinator Patrick Graham must shuffle things. He’ll get some help with the return of DB Logan Ryan, who missed two games following positive COVID-19 tests.

Expect some blue in the crowd along with all the aqua on Sunday at Hard Rock Stadium. No matter the sport, no matter the team, when a New York team — particularly the Giants, Knicks, Rangers, Mets or Yankees — plays in South Florida, the visiting team always seems to have some vocal support in the stands.