Vikings eager to work after being exposed by Cowboys 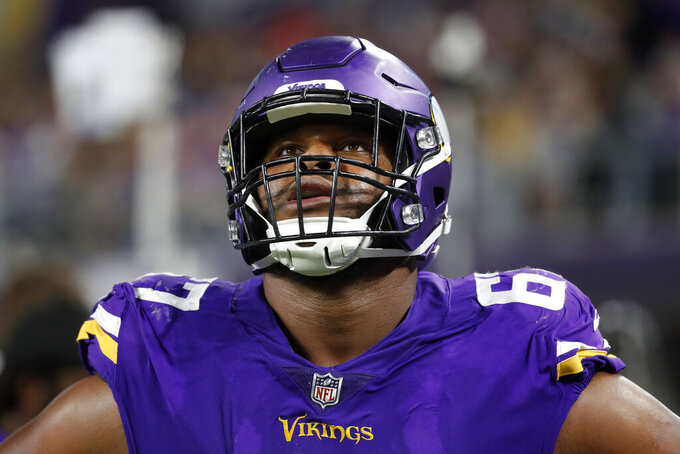 Minnesota Vikings guard Ed Ingram stands on the sideline during the second half of an NFL football game against the Dallas Cowboys, Sunday, Nov. 20, 2022, in Minneapolis. The Cowboys won 40-3. (AP Photo/Bruce Kluckhohn)

MINNEAPOLIS (AP) — The NFL this season is as competitive as ever, with all-time record rates of close games and comeback wins. Only a scant few teams are either out of contention or way ahead of the pack.

That also means a collective increase in the amount of flaws across the league.

The Minnesota Vikings had theirs dreadfully exposed and exacerbated in a 40-3 defeat by the Dallas Cowboys.

The Vikings (8-2) still lead the NFC North by four games with seven left and have a two-game cushion for the No. 2 seed in the conference that would come with two home playoff games. They also now have the dishonor of being cumulatively outscored by their opponents (231-229) over the season, a negative point differential that's the worst in NFL history for a team that has won eight or more of its first 10 games.

The most troubling development Sunday was the frequency quarterback Kirk Cousins found himself under pressure by a four-man rush, beginning with his very first attempt to pass that Micah Parsons spoiled with a strip-sack turnover.

Cousins took a career-most seven sacks, two of them against left tackle Christian Darrisaw, who went back in the concussion protocol after the second one. He was all but ruled out by coach Kevin O'Connell to play in the next game against New England on Thursday night.

“This is one of our best players with a long-term future here, and we’re going to make sure that C.D. is absolutely ... ready to roll when that time comes,” O'Connell said.

The deficit grew so big, so fast the Vikings had to ditch most of their ground game, but Dalvin Cook averaged 6.5 yards per carry. Though he skewed the total with an 81-yard touchdown run against the Bills, Cook's two highest rushing averages this season have come in the last two games.

With the offense running a cram session in pass protection improvement this week, the defense could stand to shore up the front line against the run with the recent absence of defensive end Dalvin Tomlinson looming large. The Cowboys converted eight third downs in the first half, seven by rush. They also sprung running back Tony Pollard open for six receptions for 109 yards and two touchdowns, finding a mismatch against linebacker Jordan Hicks for a 68-yard passing score.

Highlighting an individual player whose value actually rose in such a team-wide failure is hardly relevant, but backup nose tackle Khyiris Tonga had four tackles — one for loss — and a pass defensed during fourth quarter mop-up time.

The best answer here is the entire team, coaching staff included. The Vikings were thoroughly outschemed and outplayed in every phase of the game.

“Any time you lose of course it’s tough to digest, but on the bright side we’re still an 8-2 football team and we still have everything in front of us,” nickel cornerback Chandon Sullivan said.

Darrisaw will be replaced in the starting lineup this week by Blake Brandel, but beyond that, the offense remains as healthy as any unit in the league.

The defense could use a few reinforcements, though. Cornerback Akayleb Evans missed the Cowboys game with a concussion, forcing fellow rookie Andrew Booth Jr. to make his first career start with Cameron Dantzler Sr. out until the Dec. 11 game at Detroit. Evans was listed as a limited participant on the estimated injury report Monday, providing some hope of him playing Thursday. Booth, however, was listed as a non-participant with a knee injury. Tomlinson did not practice last week and sat out for the third straight game, but he was listed as a limited participant.

KEY NUMBER — 183. That was Minnesota's net yardage against Dallas, the fifth-lowest total in the NFL this season and the team's worst output in more than two years. The Vikings had 175 yards on Sept. 20, 2020 in a 28-11 loss at Indianapolis.

The Patriots are also second in the league behind the Cowboys in points allowed, presenting another significant challenge for Cousins and company in the first Thanksgiving Day home game in Vikings history. The bright side? Less time to dwell on such a lopsided defeat.

“After something like this you want to play as soon as possible,” Hicks said.