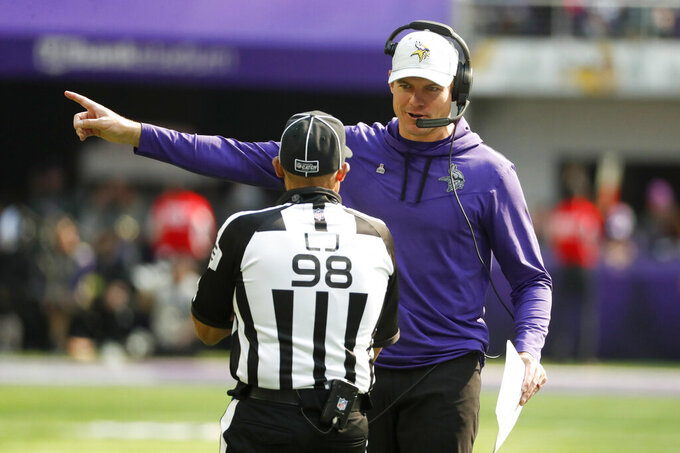 Jefferson caught eight of Cousins’ passes during that stretch, but there was no forcing the ball to Minnesota’s top playmaker. Jefferson found plenty of open space against the Chicago Bears, and six other players had receptions during the quick start.

The Vikings are starting to see more results in the offense engineered by new coach Kevin O’Connell.

“We’ve got a long way to go, five games in, but we’re really seeing some of our philosophy come to life,” O’Connell said.

Minnesota eventually pulled out a 29-22 victory late, scoring the winning touchdown with 2:26 remaining after a 17-play, 75-yard drive. It capped the most consistent effort of the season for Cousins, Jefferson and the Vikings in their new offensive system.

Cousins finished 32 of 41 for 296 yards passing. Jefferson set a career high with 12 catches for 154 yards. In all, eight players had receptions. Dalvin Cook added 18 carries for 94 yards, rushing for 5.2 yards per carry.

Minnesota had four straight drives in the middle of the game go for fewer than 40 yards, but finished with a season-high 429 total yards.

“It’s never going to be perfect, and today there were some times we stubbed our toe,” Cousins said. “But for much of the game, we played at a very high level. I also felt a lot of the success in the first half was just a really good plan by our coaches, putting us in some pretty good positions to be effective and kind of putting the wind at our back for us.”

Much of the Vikings’ offense includes holdovers from the previous regime, with the belief O’Connell could elevate their play. After not playing in the preseason, there were growing pains.

Sunday showed those pains might be subsiding. Not only are O’Connell and the offensive staff finding ways to scheme Jefferson open, but the entire offense is contributing.

“We’ve got some guys that have played a lot of football together and learned a lot along the way about each other,” O’Connell said. “The scheme is one thing, but what allows a lot of that to come to life is my comfort not only in Kirk as our quarterback, but those guys up front to give him enough time, and then our guys’ execution.”

The success Sunday wasn’t due to big plays. Minnesota only had two longer than 16 yards. Instead, Cousins methodically dissected Chicago’s defense.

O’Connell credited Cousins for adjusting after Chicago made changes defensively.

“You don’t have to throw it over people’s heads all the time to generate explosives,” O’Connell said. “Some people just won’t allow that, and that’s when we kind of have to lock into a mode of all five eligibles coming to life, attacking coverage within depth, and our guys just have done a tremendous job.”

With the win, the Vikings took the lead in the NFC North at 4-1, one game ahead of Green Bay. Perhaps most importantly, Minnesota has now swept its division opponents at home.

The first division road test is Week 14 at Detroit and the season ends at Green Bay and Chicago.

The Bears scored on both of their trips into the red zone. The Vikings have allowed touchdowns 76.92% of the time opponents have reached the red zone, tied for the third-worst mark in the NFL entering Monday night.

The offensive line has seen a dramatic turnaround this season. Cousins has only been sacked eight times in five games this season, the seventh-lowest total in the league.

According to Pro Football Focus, left tackle Christian Darrisaw has graded out as the second-best tackle in the league among players with at least 50% of his team’s snaps. Right tackle Brian O’Neill is 12th among tackles. Garrett Bradbury is the ninth-rated center and left guard Ezra Cleveland is the 11th-rated guard. Rookie right guard Ed Ingram is 31st of 62 guards.

A week after a standout special teams performance, the units had a step back Sunday.

Greg Joseph missed both of his field-goal attempts, going wide right from 53 yards and having a 51-yard attempt blocked. Punter Ryan Wright’s lone attempt went just 15 yards. Also, Jalen Reagor fumbled on a punt return, though it was recovered by Minnesota.

CB Andrew Booth Jr. (quadriceps) and WR Jalen Nailor (hamstring) were held out of Sunday’s game. ... RB Ty Chandler broke his thumb and is likely to miss time. ... CB Akayleb Evans is in the concussion protocol. ... O’Connell said S Lewis Cine was back at the team’s facilities today after returning from London following surgery to repair his broken leg.

42.9% — After going 12 of 15 on third down Sunday, Minnesota is seventh in the NFL in third-down percentage.

The Vikings are back on the road and face Miami, which is unsettled at quarterback due to the concussion status of starter Tua Tagovailoa, and Teddy Bridgewater, the former Minnesota starter, left Sunday’s game after being put in the new league concussion protocol. Rookie Skylar Thompson was 19 of 33 for 166 yards after replacing Bridgewater.