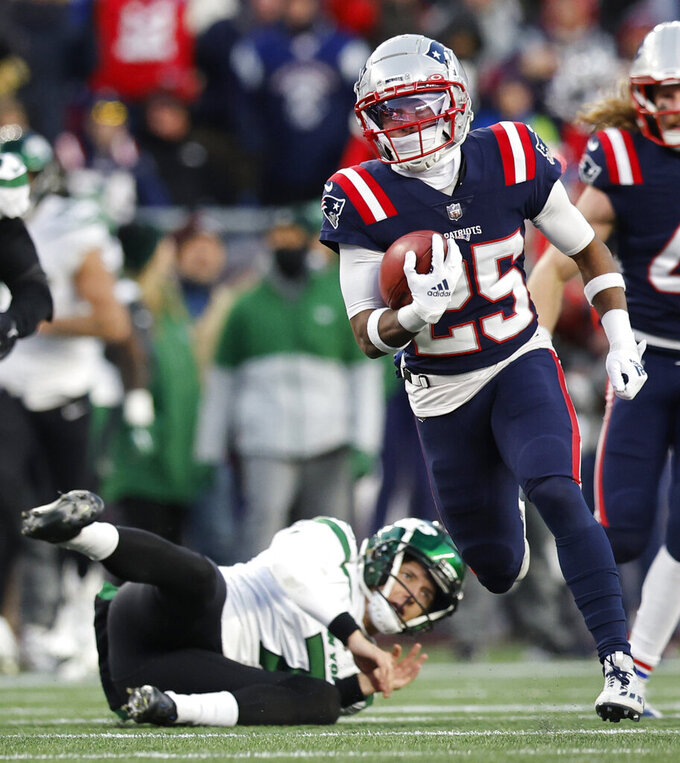 TURNOVER DIFFERENTIAL: Patriots even; Vikings plus-7.

PATRIOTS PLAYER TO WATCH: LB Matt Judon. He leads the NFL with a career-high 13 sacks. The three-time Pro Bowl pick, who's in his second season with the Patriots, has three games with at least two sacks and had 1½ sacks against the Jets.

VIKINGS PLAYER TO WATCH: TE T.J. Hockenson. With the Patriots sure to be trying to smother star WR Justin Jefferson, Hockenson ought to have plenty of pass-catching opportunities. In three games with the Vikings since arriving in a trade with Detroit, Hockenson has 21 receptions for 149 yards on 28 targets.

KEY MATCHUP: Vikings offensive line vs. Patriots pass rush. After QB Kirk Cousins took a career-high seven sacks against NFL sack leader Dallas (42), the next team on the league list comes to town. New England has 36 sacks. Vikings LT Christian Darrisaw gave up two sacks in the first half against the Cowboys, the first he'd allowed all season, and entered the concussion protocol for the second time in as many weeks. Blake Brandel will fill in this week.

KEY INJURIES: Patriots C David Andrews is in danger of being sidelined for the third time in four games because of the thigh injury he sustained early in last week’s win over the Jets. That was in his return from missing back-to-back games with a concussion. Andrews was limited in practice Tuesday. ... Patriots RT Isaiah Wynn (foot) didn't practice Tuesday. ... Vikings CB Andrew Booth Jr. (knee) has been listed as a non-participant on the injury report this week. Booth started last week for CB Akayleb Evans (concussion), who returned to practice this week on a limited basis. So did DE Dalvin Tomlinson (calf), who has missed the past three games.

SERIES NOTES: The Patriots have won five straight games against the Vikings. Their previous loss was on Sept. 17, 2000, at home in their old Foxboro Stadium. ... The Patriots are 3-2 in the regular season in Minnesota, with each of their three wins coming in different stadiums. They lost Super Bowl 52 to Philadelphia in their previous visit to U.S. Bank Stadium, which opened in 2016. ... First-year Vikings coach Kevin O’Connell was drafted by New England in the third round in 2008 and spent one season there under Patriots coach Bill Belichick, who’s in his 23rd season with the club. The Patriots also play Arizona this year, and Cardinals coach Kliff Kingsbury was a sixth-round pick by New England in 2002. The previous time a team faced two of its drafted players later as opposing head coaches was Chicago in 2014 against Jim Harbaugh and Ron Rivera.

STATS AND STUFF: The Patriots are 3-2 on Thanksgiving Day, with three straight wins. ... Belichick has won at least one game in 50 different stadiums, including the postseason. The only two active venues not on his list are U.S. Bank Stadium and Allegiant Stadium in Las Vegas, which opened in 2020. ... The Patriots have not allowed a touchdown in two straight games, their longest streak since the first three games of the 2019 season. ... The Patriots have held their opponent under 200 yards in the past two games, their first such streak since a four-game run in 2005. ... The Patriots are 26-4 when S Devin McCourty has an interception in a regular-season game. His 33 interceptions are second in team history behind Ty Law and Raymond Clayborn (36). ... Patriots DB Marcus Jones is second in the NFL with a 24.3-yard kickoff return average and second with a 16.6-yard punt return average after returning a punt for the tiebreaking 84-yard TD with 5 seconds left to beat the Jets. ... McCourty is tied with Vikings S Harrison Smith for the most interceptions (33) among active NFL players. McCourty, Smith, Marcus Peters and Vikings CB Patrick Peterson are the only active players with at least 30 interceptions. ... The Vikings are 6-2 on Thanksgiving Day. This is their first home game on the holiday in team history. ... Jefferson needs 55 receiving yards to set the NFL record for most yards in a player's first three seasons, currently held by Randy Moss. ... Cousins had a streak of 39 straight games with a TD pass snapped by the Cowboys. That was the longest active streak in the league and the sixth longest in NFL history. ... Vikings WR Adam Thielen (6,458) passed Jake Reed last week to move into fourth place on the team's career receiving yardage list. ... Vikings OLB Za'Darius Smith is fourth in the NFL with 9½ sacks. ... Vikings DT Harrison Phillips had a career-high six solo tackles last week, one for loss.