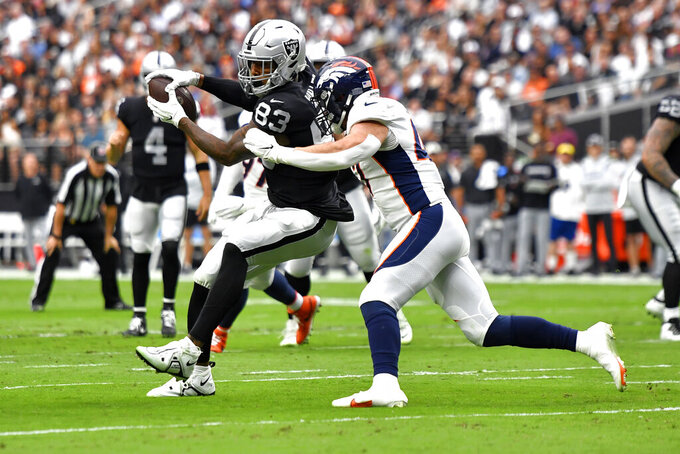 NEW ORLEANS (AP) — Las Vegas Raiders tight end Darren Waller has been scratched from Sunday's game against the New Orleans Saints after trying to practice this past week.

Waller left the Raiders' Oct. 10 game at Kansas City with a hamstring injury after playing just eight snaps without a catch and now has been inactive for two straight games. He'd been listed as questionable on Friday for a game that finds both the Raiders (2-4) and Saints (2-5) needing victories to climb back into the playoff pictures in their respective conferences.

Waller is the Raiders' top tight end when healthy. This season, he has 16 catches for 175 yards and one TD in the four games in which he's had a receiving stat. His recovery also has spanned the Raiders' bye in Week 6.

Raiders leading receiver Davante Adams, who was limited by an illness and listed as questionable, was deemed available to play.

Meanwhile, the Saints have activated 2021 first-round draft choice Payton Turner, a defensive end who has missed New Orleans' previous three games with a chest injury but practiced without limitations this week.

Saints cornerback Paulson Adebo (knee), tight end Juwan Johnson (hamstring), guard Andrus Peat (chest), who all were limited Friday and listed as questionable, remained active for the game. Also in uniform for New Orleans was defensive tackle David Onyemata, who'd been listed as questionable with an illness on Friday.