What next? Steelers' defense struggling with consistency 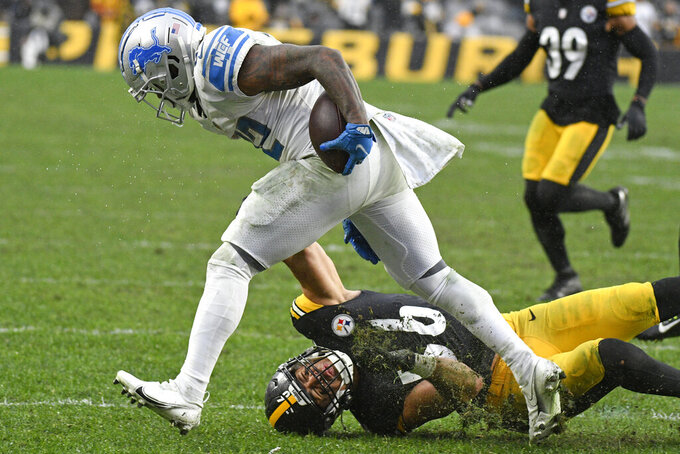 Detroit Lions running back D'Andre Swift, top, gets past Pittsburgh Steelers outside linebacker Alex Highsmith (56) during the second half of an NFL football game in Pittsburgh, Sunday, Nov. 14, 2021. (AP Photo/Don Wright) 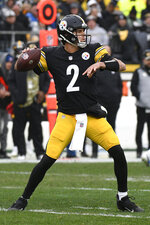 PITTSBURGH (AP) — The Pittsburgh Steelers have very little margin for error, no matter who is at quarterback.

Ben Roethlisberger, Mason Rudolph, halfway through the season, the only consistent thing about the Steelers' offense is that it is not going to score 30 points and most weeks, 20 may be asking a lot.

All of which is manageable if Pittsburgh's defense plays at the level that's been the standard during most of coordinator Keith Butler's tenure.

Five times in Butler's six seasons the Steelers have finished in the top 12 in yards and points allowed. That might not happen in 2021. And if it doesn't, whatever chance Pittsburgh has of reaching the playoffs likely vanishes.

That wasn't Kansas City or Tennessee or Baltimore — all of whom await the Steelers (5-3-1) over the next two months — on the other side of the field on Sunday at lifeless and soggy Heinz Field. It was the Detroit Lions.

Alualu's season is over. Tuitt's may never start as he recovers from offseason knee surgery. The fill-ins had played well at times before Sunday. They did not against Detroit. Save for another brilliant performance by Cam Heyward, the defense did little to offer proof it can consistently pick up the slack if the offense continues to be wildly uneven.

“We have to get off blocks, stay in our gaps, and drive our feet,” Heyward said. “Early on, myself included, I missed a couple of tackles. But it came down to a tie game and we needed some big plays, and we didn’t get enough.”

Now Pittsburgh faces a daunting second half of the schedule without one of the best players in the league. Star outside linebacker T.J. Watt crumpled to the ground in the third quarter after sacking Goff. He watched the final two-plus quarters from the sideline in a massive black coat with what head coach Mike Tomlin described as hip and knee injuries.

Watt's status going forward — at least in the near term — appears uncertain. So does Pittsburgh's. While the AFC North suddenly looks gettable for whoever emerges from what is a wide-open and currently mediocre race, if the Steelers are to be a part of the conversation the defense needs to re-establish itself.

“It’s about whipping a man and making a tackle,” outside linebacker Alex Highsmith said. “We know that we have to be a lot better. Every one of us, we just have to look at each other in the mirror ... but today was unacceptable.”

Najee Harris. While Rudolph scuffled after a hot start while filling in for a COVID-19 positive Roethlisberger, Harris served as the engine that makes the offense go. Harris ran for 105 yards on 26 carries and caught four passes for 26 yards. While Cincinnati wide receiver JaMarr Chase and New England quarterback Mac Jones are vying for the lead in the Offensive Rookie of the Year race, Harris could catch them over the next eight weeks. He just needs to get the ball.

Any red-zone sequence that doesn't involve Harris. The Steelers had a first-and-goal at the Detroit 5 down six in the third quarter. Harris didn't touch the ball once as three incompletions led to a short field goal.

Wide receiver Ray-Ray McCloud improbably found himself as one of Rudolph's go-to targets. With Chase Claypool out nursing a toe injury, McCloud caught a career-high nine passes for 63 yards.

The special teams, outside of kicker Chris Boswell, have done little to distinguish themselves of late. Rookie punter Pressly Harvin III had a net average of just 31.7 yards per kick and failed to pin the Lions back. For the strides he appears to be making as a receiver, McCloud continues to do little in the return game.

Watt is hardly the only concern. Guards Trai Turner and Kevin Dotson both left Sunday with ankle injuries. Veteran cornerback Joe Haden has a midfoot injury. Throw in Watt, Roethlisberger and Claypool and the Steelers are thinning at positions they can ill afford to be thin.

1 — number of teams on Pittsburgh's remaining schedule that currently have a losing record (Minnesota).

Head west and try to beat the Chargers on the road with a backup quarterback (if necessary) for a third straight time. Michael Vick was the starter when Pittsburgh won in San Diego in 2015 and Devlin “Duck” Hodges was under center in 2019 when the Steelers knocked off the Chargers in Los Angeles.