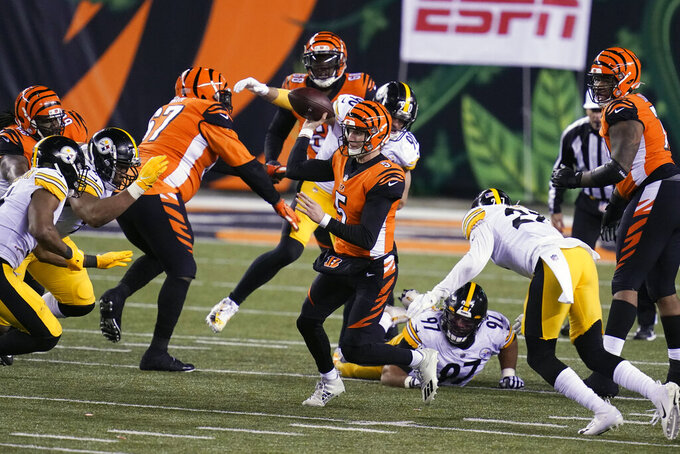 Cincinnati Bengals quarterback Ryan Finley (5) scrambles to throw during the second half of an NFL football game against the Pittsburgh Steelers, Monday, Dec. 21, 2020, in Cincinnati. (AP Photo/Michael Conroy)

PITTSBURGH (AP) — Mike Tomlin, to borrow a phrase, trusts the process. So does Ben Roethlisberger and everyone else on the Pittsburgh Steelers.

Yet trusting the reeling AFC North leaders will get things turned around following a third straight loss — this one a 27-17 clunker in Cincinnati on Monday night in which the Steelers (11-3) never led against a team that hadn't won since before Election Day — and actually doing it are two different matters entirely.

A week ago, Roethlisberger channeled his inner Aaron Rodgers and said in so many words that everyone needed to just relax. Tomlin pointed to having a normal practice schedule for the first time in a while would help the Steelers regain momentum.

Not so much. Not after three first-half turnovers. Not after the banged-up Bengals and third-string quarterback Ryan Finley mashed Pittsburgh's depleted defensive front seven in the fourth quarter. Not after the worst first-half performance (statistically) of Roethlisberger's Hall of Fame-worthy career.

Now the division title that looked like a lock at the start of December feels considerably more tenuous. The Steelers finish the regular season with a visit from surging Indianapolis (10-4) on Sunday then head to Cleveland to face the Browns (10-4) in what could be a showdown for one of the top four seeds in the AFC.

While stressing whatever has transpired on the field over the past month isn't good enough, Tomlin added Tuesday that “there won't be sweeping changes to what we're doing. ... We've got to have better performance.”

Roethlisberger admitted in the aftermath on Monday night that like most players in December, he's not 100%. For years the Steelers have been careful about Roethlisberger's participation during the week. He typically doesn't practice on Wednesdays to avoid unnecessary wear and tear.

“I'm not opposed to changing it if the circumstances dictate it,” Tomlin said.

The circumstances coming off a game in which Roethlisberger completed just 20 of 38 passes for 170 yards with a touchdown and a pick would seem to dictate nothing should be off the table.

“I’m a firm believer that things won't change just because we think they will,” defensive end Cameron Heyward said.

He's not wrong. In the big picture “The Steeler Way” has worked far more often than not over the past five decades. Yet the recent history doesn't seem to care much about the franchise's Super Bowl-laden resume.

The upset loss to Jacksonville in the 2017 playoffs. A 2-4 stretch to close 2018 that cost them a postseason berth. An 0-3 finish last season to thwart an unlikely playoff berth that Roethlisberger watched from afar while rehabbing his surgically repaired right elbow.

Tomlin stressed “there are enough challenges here in 2020 to be concerned about” to delve too deeply into what the team's issues have been down the stretch over the past few seasons.

That's true, but time is running out quickly for the Steelers to recapture the calm competence they showed while racing to an 11-0 start that feels like a distant memory.

How long Pittsburgh can remain in it once it gets there, however, is another matter entirely.

Not much, though the running game did receive a bit of a jolt by the play of Benny Snell Jr. With starter James Conner out because of a quadriceps injury, Snell ran for 84 yards on 18 carries, the most by a running back since Conner rolled up 89 yards in a victory over Jacksonville on Nov. 22.

The defense, thanks in large part to attrition, is not what it was a month ago. Injuries to inside linebackers Devin Bush and Robert Spillane and Vince Williams' trip to the reserve/COVID-19 list put the majority of the workload on the shoulders of recently acquired Avery Williamson and Marcus Allen, a converted safety. The Bengals did something few teams have done against the Steelers this season: they ran it down Pittsburgh's throat even though the Steelers knew Cincinnati was going to run the ball. That doesn't bode well going forward.

Snell likely earned himself an extended look even if Conner is able to play against the Colts. When given at least 10 carries during his brief career, Snell has been effective, averaging 4.7 yards per carry. Might be time to just stick with him and see if it works.

Wide receiver JuJu Smith-Schuster's days of dancing on the logo at midfield during pregame might be over. A week after the Bills took exception to the practice, the Bengals did too. It didn't help that Smith-Schuster fumbled near the logo on Monday as Cincinnati built a 17-0 lead.

“I doubt any of those antics and things of that nature are legitimate motivating factors as you step into professional stadiums,” Tomlin said. “But it is about respect. We’ll have a conversation.”

Williams, Conner and rookie offensive lineman Kevin Dotson (shoulder) could all be available against the Colts. Less certain is the status of fullback Derek Watt (concussion) or tight end Eric Ebron (back), both of whom left early against the Bengals.

20/1 — Pittsburgh's odds to win the Super Bowl according to oddsmakers. The Steelers had been as low as 11/2 during their 11-0 start.

Hope the third time's the charm when it comes to locking up the AFC North when the Colts — 5-1 in their past six games — visit Heinz Field on Sunday.