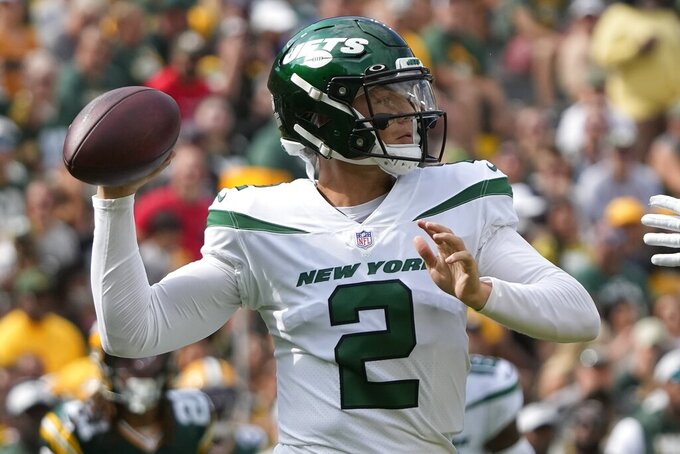 Wilson directed three scoring drives and threw his first two touchdown passes of the preseason in the New York Jets' 23-14 victory over the Green Bay Packers on Saturday.

The Jets have gone through an assembly line of quarterbacks while searching for their first playoff berth since 2010. They're hoping they finally have found a keeper in Wilson, the rookie from BYU who went second overall in this year's draft.

He led the Jets to two TDs and a field goal in his four series against a Packers defense that didn't play Pro Bowl selections Jaire Alexander, Za'Darius Smith and most of their other notable names.

“It was a great look at a lot of our younger players versus some of their starters, and I thought our guys went out there and competed hard,” Packers coach Matt LaFleur said. “But we made way too many mistakes to win the football game, and we're always trying to win here.”

The only Wilson-led drive that didn’t result in points came when the Jets opted to punt on fourth-and-1 from their own 49-yard line.

Corey Davis caught four passes from Wilson for 70 yards. Davis signed a three-year contract with the Jets worth $37.5 million after spending his first four seasons with Tennessee.

“I just have a lot of trust in him and all his one-on-one routes, that he's going to get open,” Wilson said. “I hope he's got trust I'm going to get him the ball.”

The Packers didn’t play reigning MVP Aaron Rodgers or backup quarterback Jordan Love, who hurt his throwing shoulder last week while making his pro debut in a 26-7 preseason loss to the Houston Texans.

That left Green Bay relying on Kurt Benkert, who went 18 of 25 for 151 yards with a 5-yard touchdown pass to Jace Sternberger and an interception. He engineered a 19-play, 81-yard touchdown drive despite tripping over linemen and falling backward on consecutive plays during that series.

His hopes of making Green Bay's 53-man roster depend on whether the Packers decide to keep three quarterbacks.

“I feel like I've done everything that I could,” Benkert said. “I feel like I've put myself in a pretty good position, but at the end of the day, I know it's a numbers game and I could play (poorly) and they need me on the 53, or I could play really well and they don't need me and I'm on the practice squad.”

The Packers didn’t dress 32 players for Saturday’s game, including nearly all their regulars. They had sat out 30 players in their preseason opener with Houston a week earlier.

LaFleur noted that they weren't merely resting them all and that some of those players were out due to injury.

The injuries continue piling for the Jets, who held two joint practices with the Packers here before Saturday’s exhibition game.

Defensive end Carl Lawson ruptured his Achilles tendon and backup safety Zane Lewis injured his knee in Thursday’s practice, knocking both out for the rest of the season. Backup offensive lineman Conor McDermott was carted off the field Saturday with a knee injury. Linebacker Jarrad Davis hurt his ankle.

Green Bay’s Kylin Hill, a rookie seventh-round pick from Mississippi State, moved closer to securing a spot on the roster as the Packers’ No. 3 running back. One week after turning a short completion into a 22-yard touchdown, Hill reached the end zone again on a 12-yard run.

“Seventh-round pick, that’s just my daily grind, my motivation,” Hill said. “When I’m tired, that’s what I think about, just to prove a lot of people wrong in my life.”

Jets: Wrap up the preseason schedule at home Friday against Philadelphia.

Packers: At Buffalo next Saturday.