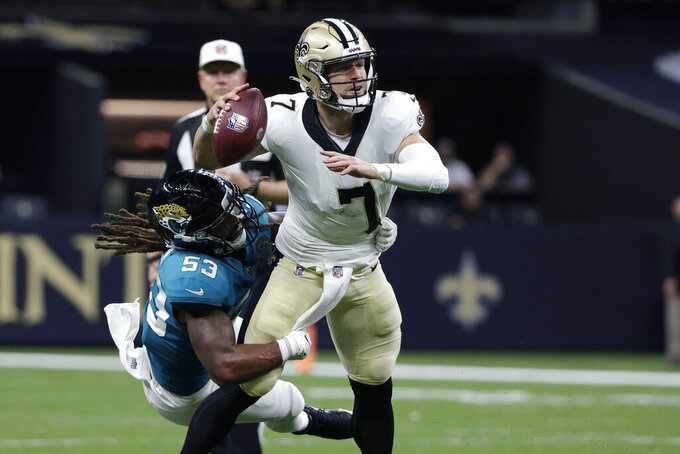 Winston completed touchdown passes of 43 and 29 yards to second-year pro Marquez Callaway, and the Saints defeated the Jacksonville Jaguars 23-21 in a preseason game on Monday night.

“Everybody knows Jameis has got a good arm,” Callaway said. “He’s going to throw it to where we can make a play.”

Winston completed nine of 10 passes for 123 yards without an interception, bolstering his candidacy to succeed NFL all-time leading passer Drew Brees as the Saints' new starter.

“I haven’t started a football game in so long, man,” Winston said. “So, I was so excited just to get an opportunity to start and lead the pack.”

While Winston lamented missing “the easiest throw of the night,” he left the field confident that he made high-percentage throws and minimized the type of risk-taking that defined his last season in Tampa Bay, when his NFL-high 30 interceptions marred a campaign in which he also eclipsed 5,000 yards passing and connected on 33 TDs.

“I think I’m really good on decisions. I just got to get better on accuracy," Winston said. "As long as I’m executing the right way, my eyes are in the right place and I’m making the right decisions, I can live with it.”

Winston is competing for the job with Taysom Hill, who went 3-1 as a starter while Brees was injured last season. Hill passed for 138 yards and a touchdown against Jacksonville.

Saints coach Sean Payton declined to say how much more he needed to see before announcing a starter.

“When we know what direction we're going, we'll let you guys know,” he said.

Both clubs entered the game in the midst of quarterback competitions.

No. 1 overall draft choice Trevor Lawrence got the start over incumbent Gardner Minshew and played the first half, going 14 for 23 for 113 yards behind an offensive line featuring three backups — including rookie Walker Little at left tackle.

“We're not balanced right now,” first-year Jaguars coach Urban Myer said. “We've got to get our offensive line back and play better and run the ball. ... There just wasn't much rhythm in the first half."

Lawrence led one scoring drive that ended with a field goal.

“I just got to get a little bit better at getting the ball out, taking completions and staying out of second-and-long and third-and-long,” Lawrence said. “We've got to click a little bit more, still got some work to do ... but I think we're heading in the right direction.”

His final series stalled when he was sacked for a nine-yard loss by Jalen Dalton at the Saints' 25. The drive ended with Josh Lambo missing a 43-yard field goal attempt off the upright.

Hill played the majority of the first half and the third quarter, completing 11 of 20 passes. His first two series ended with sacks by Jihad Ward and Dawuane Smoot. His first scoring drive culminated with former Jaguars kicker Aldrick Rosas hitting a 52-yard field goal as the second quarter ended.

Hill's touchdown went for 14 yards to Lil'Jordan Humphrey to make it 23-3.

“It's hard to really give you an evaluation without seeing the film,” Hill said. “Just like any other game, there's plays I'd like to have back and then there was some good stuff.”

Minshew played most of the second half, completing 13 of 21 passes for 149 yards before his night ended when he was intercepted by linebacker Wynton McManis during a scramble on second-and-goal from the 2.

C.J. Beathard had the best night of the Jags QBs statistically, passing for touchdowns of 3 yards to Jeff Cotton and 24 yards to Collin Johnson in the final six minutes.

Callaway had the crowd gasping in amazement when they saw replays of his touchdowns. He snagged the first — his longer of the two — with a diving catch between two defenders after he'd been interfered with from behind by rookie Tyson Campbell.

His second TD came on a one-handed catch over his outside shoulder along the sideline.

Callaway, who played in 11 regular-season games with three starts as an undrafted rookie out of Tennessee in 2020, beat seasoned veteran Shaquill Griffin on both scores. Griffin, formerly with Seattle, was among the Jaguars' most significant acquisitions in free agency, signing a three-year deal worth up to $40 million.

Saints: Second-year tight end Adam Trautman, a projected starter this season, was taken to the locker room during the first half with an apparent lower-body injury which the club did not disclose. Reserve defensive back Bryce Thompson limped off the field in the fourth quarter.

Saints: Wrap up their preseason slate at home Saturday night against Arizona.