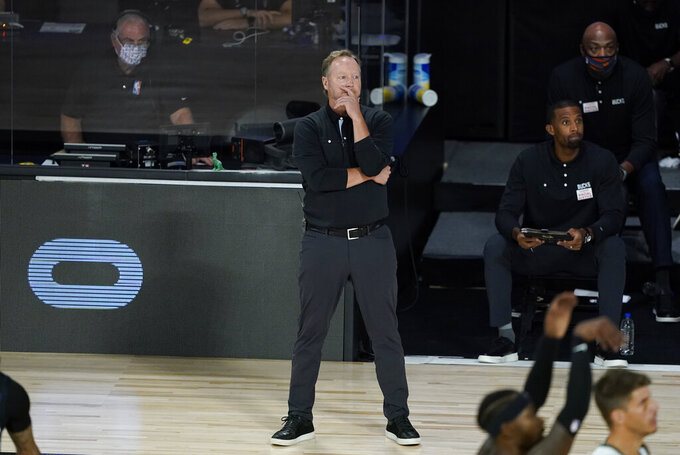 MILWAUKEE (AP) — Wisconsin’s three major professional sports teams wasted no time speaking out after the police shooting of a Black man sparked violent protests in the Milwaukee suburb of Kenosha.

A video that went viral on Sunday showed 29-year-old Jacob Blake getting shot, apparently in the back, as he leaned into his SUV while his three children sat inside the vehicle. Blake was hospitalized and in serious condition Monday.

“A Black man was shot and his life is in peril, and it frankly shouldn’t be,” Milwaukee Brewers manager Craig Counsell said as he wore a “Black Lives Matter” T-shirt before his team’s game Monday with the Cincinnati Reds. “We’ve got a systemic problem that we need to address, and we all need to educate ourselves. Whether you agree or disagree with what I’m saying, I think it’s important that we continue to think, we continue to pursue policy change, we continue to act, because there’s violence happening that just absolutely should not be happening. We can’t stay quiet about it.”

The Brewers issued a statement calling the video “deeply disturbing” and noting that “once again, we are faced with images of a horrific incident that show what appear to be inexplicable and excessive force inflicted upon a Black individual.” The NFL’s Green Bay Packers and NBA’s Milwaukee Bucks also issued statements offering support for Blake and his family.

While conducting a Zoom session with reporters after Monday’s practice, Packers coach Matt LaFleur discussed the emotions he experienced while watching the video of the Kenosha shooting.

“When you watch something like that, it’s just so disgusting,” LaFleur said. “It’s disturbing. I watched it once, and I just don’t even know what to think. I know I don’t know all the facts around the case, but it’s just a series. It keeps happening over, and over, and over again, and it blows my mind that we’re sitting here in 2020, and we can’t treat everybody the same. I don’t know, I’m just kind of at a loss for words.”

The statements offered the latest example of how professional sports teams taking stands on social justice and race issues since the May 25 death of George Floyd and the circulation of a video that showed a Minneapolis police officer pressing a knee into Floyd’s neck while other police stood by.

After Floyd’s death, the Bucks held a protest march in downtown Milwaukee that drew an announced crowd of 7,500 people. Bucks guard Sterling Brown has a federal lawsuit pending against the city of Milwaukee, saying he was targeted because he was Black and that his civil rights were violated in January 2018 when officers used a stun gun on him after a parking violation.

“We need to have change,” Bucks coach Mike Budenholzer said before this team’s 121-106 Game 3 first-round playoff victory over the Orlando Magic at Lake Buena Vista, Florida. “We need to be better.”

Bucks forward Khris Middleton discussed the video after the game and said “this is why we have so many people outraged.”

“The man was shot seven times a point-blank range in the back,” Middleton said. “I mean, it doesn’t get any sicker than that. I think people are starting to see why Black people ... are so afraid of police, because at any time, no matter what type of position or no matter what they did right or wrong, their first act is to shoot us. I think that’s a very scary situation to be in, when they are supposed to protect us.”

In Green Bay, LaFleur said he talked to some of his players to get their perspective on the situation and try to “float around some ideas on how we can make a difference and use our platform, because things have to change.” LaFleur added that “we can’t stand for this any longer.”

“I’m not going to comment directly on the video until more facts come out but obviously it’s something where as a non-police officer, I think (for) a lot of us, (the) natural question is when is lethal force necessary,” Packers quarterback and two-time NFL MVP Aaron Rodgers said. “Again, I think that goes to a systematic problem that needs to be addressed at some point. There’s antiquated laws that are prejudicial against people of color in this state.”