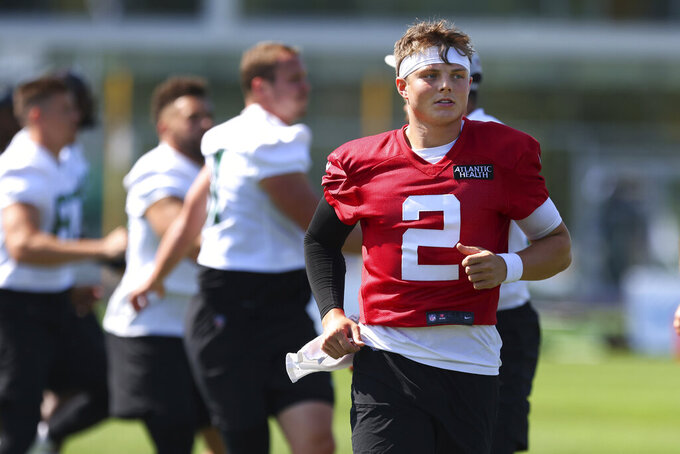 “Yeah, not great,” the rookie quarterback acknowledged Saturday night after a shaky practice that included two interceptions in his first appearance at MetLife Stadium.

“I have high expectations for myself and this offense, and I've got to lead those guys and I've got to make better decisions,” Wilson said. “That's why this isn't Game 1. That's why we're doing this. I understand that and of course I'm going to be frustrated at myself, but I'm going to go back in the film room and find out what I can learn to get better.”

The No. 2 overall pick in the draft unofficially finished 11 of 24 for 112 yards while working with the starters in front of close to 20,000 fans, who hadn't been inside the stadium since late in the 2019 season. There were a few nice throws in team drills — a 17-yard pass to Corey Davis and a 20-yard completion to fellow rookie Elijah Moore — but Wilson also was indecisive at times, had a few overthrows and his receivers dropped a few balls.

All in all, nothing unexpected for a rookie QB getting a crash course in life in the NFL.

“These moments are priceless for him,” said coach Robert Saleh. “He had some good moments and he obviously had some rookie moments. So, it's good — there's going to be a lot of tape to learn off of for him.”

Saleh ran the scrimmage much like the usual training camp practices, with starters vs. starters, second-teamers vs. second-teamers, and so on. There were scripted plays, like a game, and there were several team periods — to give players a first taste of in-game operations.

Among those details is offensive coordinator Mike LaFleur being upstairs in a box relaying the plays into Wilson's helmet — rather than having him on the sideline.

“I think it's good,” said Wilson, adding that his coordinator last year at BYU was also in a stadium box. “We'll have our times we'll be able to talk after series and all that kind of thing, but I think it'll be easy for us.”

Things will ramp up next Saturday night when the Jets play the Giants in the preseason opener.

“You can't get down on yourself," Wilson said. “I've got all the confidence in the world in myself. That's why of course I'm going to be frustrated. My thing is just understanding that it just takes time and I'm going to do everything I can to get there and I've got the help of my teammates and my coaches to help me get there.”

While the starting offense struggled, the defense was solid — with C.J. Mosley and Javelin Guidry making interceptions. Mosley's sliding pick came off a deflection by Lamarcus Joyner.

Ty Johnson caught a pass from White, but had the ball stripped out of his hands by Elijah Campbell. Blake Cashman picked up the ball and ran down the sideline for a touchdown.

Guard Alex Lewis was placed on the exempt/left team list Friday, a day after leaving practice with what Saleh called a head injury.

On Saturday, the coach said Lewis is “going through some things that are much greater than football.”

Lewis started nine games last season before being placed on the reserve/non-football injury list. He didn’t play again after being designated to return in December. Lewis took a pay cut in the offseason and was expected to be the backup at left guard after the Jets drafted Alijah Vera-Tucker with the No. 14 overall pick.

Saleh said the Jets are "leaving the lines of communication open for him” to possibly return at some point.

OT George Fant practiced for the first time this summer after opening training camp on the reserve/COVID-19 list following a positive test for the coronavirus. ... DL John Franklin-Myers practiced and had a “sack” after leaving with a shoulder injury Thursday. ... Vera-Tucker (pectoral), TE Daniel Brown (left hamstring) and CB Isaiah Dunn (right leg) sat out. ... DL Ronald Blair injured a hamstring and OL Teton Saltes hurt a knee during the scrimmage.