Zappe's star grows brighter as Patriots get back to .500 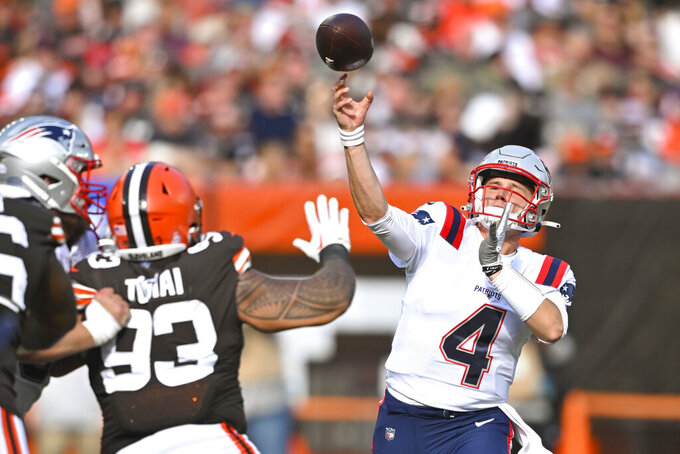 FOXBOROUGH, Mass. (AP) — The idea that rookie Bailey Zappe could supplant Mac Jones as the Patriots’ starting quarterback was preposterous in the aftermath of his first career victory.

It still feels far-fetched following a second productive outing by Zappe during New England’s 38-15 win over Cleveland on Sunday. But there’s no denying the Patriots’ offense has been at its most efficient over the past two games.

Zappe spread the ball to seven different receivers, tossed two touchdown passes and finished with 309 passing yards against the Browns. He led the offense to touchdowns on three of its five trips to the red zone, an area where the team has struggled. The run-first, conservative passing attack the coaching staff has implemented with Zappe also seems to bring out many of the best attributes of the Patriots' roster.

Asked who his starting quarterback would be once Jones is healthy enough to return from his injured left ankle, coach Bill Belichick said only that Jones continues to be evaluated.

“We’ll see how that process is,” Belichick said.

There also doesn’t seem to be a great sense of urgency for Jones to return with the offense picking up steam and the defense giving up 15 points over the past two games to help get New England back to .500.

For his part, Zappe continues to do what he’s told while enjoying his teammates' support.

“I’m really proud of what he’s done,” special teams captain Matt Slater said. “You rewind a month ago, nobody’s talking about him being a contributor for our football team. But that’s the National Football League. You never know when your moment’s going to come, but your hope is that you prepare enough and you’re able to take advantage of it, and I think the young man is doing just that.

“We’re very fortunate to be in a situation where our third quarterback can play the way that he’s playing now. He’s really keeping us alive and keeping us competitive.”

The rookie class continues to produce. On Sunday it was receiver Tyquan Thornton, who pulled in his first career touchdown catch to put the Patriots up 17-6 in the third quarter. He added a 19-yard TD run in the fourth on a jet sweep.

Deatrich Wise. The second-year defensive lineman posted his fifth sack of the season, tying his total from last year. He also had a forced fumble and pass breakup. Wise was named a defensive captain in the preseason and he has elevated his play over the past three games with Lawrence Guy out with a shoulder injury.

RT Isaiah Wynn. He picked up his NFL-leading seventh penalty of the season when he was called for a false start in the first quarter. Marcus Cannon again replaced him off the bench and finished with more snaps (46) than Wynn (42) for the game. It could be a sign of a more permanent change.

64 — Nick Folk’s streak ended at an NFL-best 64 consecutive made field goals inside 50 yards when his 45-yard attempt missed wide right in the fourth quarter.

The Patriots host the struggling Chicago Bears next Monday night.