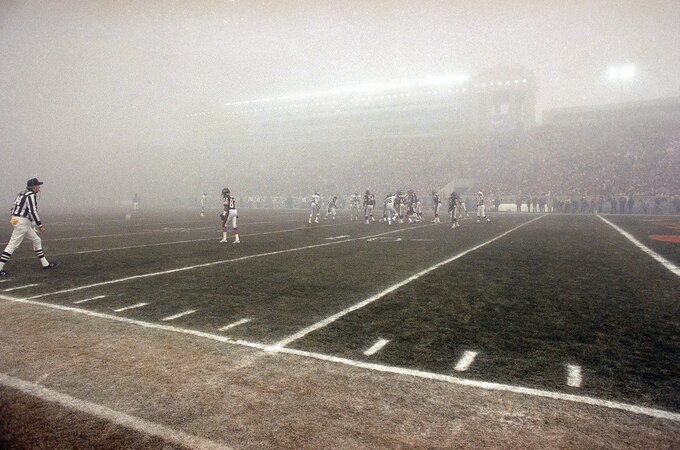 FILE - In this Dec. 31, 1988, file photo, lights shine through the fog during an NFL football playoff game between the Chicago Bears and the Philadelphia Eagles at Soldier Field in Chicago. Chicago's victory in the Fog Bowl 30 years ago is the only time the Bears have defeated the Eagles in three playoff meetings. The Bears get another chance when they host the Eagles in an NFC wild-card game. (AP Photo, File) 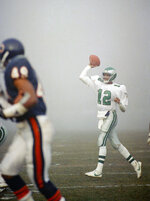 Then weather stole the show.

Late in the second quarter with the Bears leading 17-6, things got weird. A dense fog rolled in off Lake Michigan and seeped into Soldier Field.

"I remember looking to the left side of the field and we thought the stadium was on fire because it was that thick and it was billowing over the side of the wall," former Eagles middle linebacker Mike Reichenbach recalled this week. "It was like a horror movie. It kind of engulfed the stadium in no time."

CBS play-by-play announcer Verne Lundquist and analyst Terry Bradshaw couldn't see the field from the booth. Fans in the stands had no idea what was happening.

"It's eerie," Lundquist said on the broadcast before Bradshaw explained how warm weather — the temperature was in the mid-30s — mixed with cold water from the lake created the fog.

The fog grew thicker after halftime and it became more difficult for players and fans at the game to see anything. Viewers couldn't see the action on television even though CBS switched to its sideline cameras.

Reichenbach said he had to run over to Ryan on the sideline to get the defensive calls before going back to relay it in the huddle. But the game continued despite poor visibility.

When the officials met for a discussion in the end zone, Ryan sent Reichenbach over to find out what they were thinking.

"They were looking to see the goal posts so we can play," Reichenbach said. "They said: 'Yeah, we can see it.' I couldn't see 20 yards. It was very dense. There was all kinds of stuff going on in the trenches, holding, punching. It got physical."

Eagles running back Keith Byars wasn't sure what the officials were seeing.

"I couldn't see past the left tackle," said Byars, who caught nine passes for 103 yards.

Longtime Eagles play-by-play radio announcer Merrill Reese compares calling the game in the fog to staring at a white wall.

"We saw absolutely nothing," Reese said.

Somehow, Eagles quarterback Randall Cunningham racked up 407 yards passing, but he threw three interceptions and the offense could only manage four field goals in a 20-12 loss.

Many Philadelphia players insist the outcome would've been different if it wasn't for the fog. Byars said the Eagles would have gone on to win the Super Bowl. The San Francisco 49ers ended up defeating the Cincinnati Bengals for the championship.

"I couldn't see 15 yards past the line of scrimmage," Cunningham said afterward. "We had to go to short passes. The Bears knew that, and they jumped all over it."

The Eagles won the NFC East in 1988 on the final day of the regular season, finishing 10-6 in Ryan's third year with the team. The brash-talking Ryan was the defensive coordinator on Ditka's staff in Chicago when the Bears destroyed the New England Patriots 46-10 in the Super Bowl following the 1985 season. Ryan was carried off the field after that victory and rode off to Philadelphia, declaring "You got a winner in town" on the day he was hired as head coach in 1986.

There was plenty of animosity between Ryan and Ditka from the time they were together in Chicago and afterward. It boiled over during the week leading up to that playoff game, and Ryan had the team's bus driver circle around Soldier Field to honk the horn when the Eagles arrived in Chicago the day before the game.

"We come into the city and everybody is thinking about settling in, get to the hotel, think about the game, and Buddy wants to drive around the stadium honking the horns," Reichenbach said. "I remember going to the stadium from the airport and the bus driver is honking the horn and nobody was there. We're all thinking why are we doing this, but that was Buddy."

Chicago's victory in the Fog Bowl 30 years ago is the only time the Bears have defeated the Eagles in three playoff meetings. The Bears (12-4) get another chance when they host the Eagles (9-7) on Sunday in an NFC wild-card game.