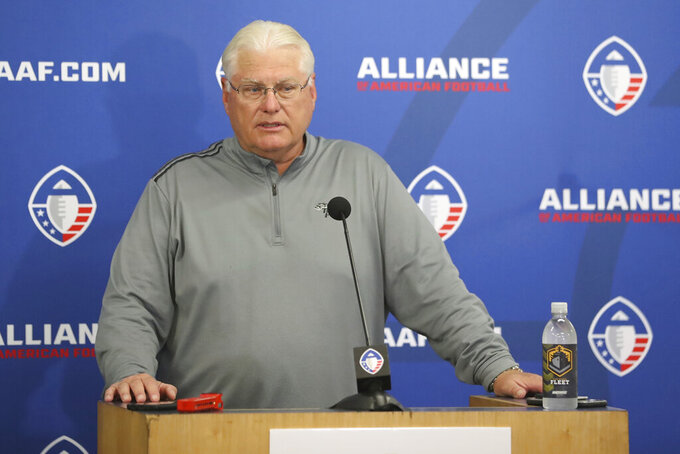 FILE - In this March 17, 2019, file photo, San Diego Fleet head coach Mike Martz talks to the media in San Diego. The Alliance of American Football is suspending operations eight games into its first season. A person with knowledge of the decision tells The Associated Press the eight-team spring football league is not folding, but games will not be played this weekend. The decision was made by majority owner Tom Dundon. The person spoke to The Associated Press on condition of anonymity because league officials were still working through details of the suspension. An announcement from the league is expected later Tuesday, April 2, 2019.(AP Photo/Peter Joneleit, File)

SAN DIEGO (AP) — The Alliance of American Football has ended its first season prematurely and told most employees that they will be terminated as of Wednesday.

Employees were notified of the decision in a letter from the AAF board on Tuesday afternoon. The board essentially is majority owner Tom Dundon, who also owns the NHL's Carolina Hurricanes.

The letter, obtained by The Associated Press, gave no reason for ending the inaugural season, only that the decision was made "after careful consideration." It also said a small staff would remain to seek new investment capital and "restructure our business. Should those efforts prove successful, we look forward to working with many of you on season two."

"On the one hand it was kind of our wildest fantasies come true. It all came true and now it's all come crashing down."

Asked why the league was shutting down, Polian said he's heard "only that it's about the money. That's all."

Several hours before the letter was sent, Memphis quarterback Johnny Manziel tweeted : "If you're an AAF player and the league does dissolve. The last check you got will be the last one that you get. No lawsuit or anything else will get you your bread. Save your money and keep your head up. It's the only choice at this point unless something drastic happens."

Manziel said in another tweet: "Just the reality of this unfortunate situation.. great concept, good football on the field and fun for fans to watch. Just not enough money to go around which has been the main problem with "other" leagues for a long time."

The letter said employees would be paid through Wednesday.

The AAF seemed to have a better chance of surviving than other alternative leagues, such as the USFL and the World League, because of the people and philosophies involved.

Polian and co-founder Charlie Ebersol, a television and film producer, envisioned it as a development league for the NFL with several rules tweaks designed to speed up play and make it safer. There were no kickoffs or PATs. Teams had to go for a two-point conversion after touchdowns.

"We were headed to a tremendous run of success, beginning with Saturday's game leading into the Final Four on CBS," Polian told the AP. "Our league on the field has prospered and grown. The football's gotten better, and that's a tremendous tribute to the coaches and players and GMs and front office staff and all the other people who have done a phenomenal job."

Polian later said in a statement that when Dundon took over, it was his and Ebersol's belief "that we would finish the season, pay our creditors and make the necessary adjustments to move forward in a manner that made economic sense for all. The momentum generated by our players, coaches and football staff had us well positioned for future success. Regrettably, we will not have that opportunity."

While it clearly wasn't NFL-caliber football, it was entertaining and helped fill the post-Super Bowl void. Among the league's coaches were Steve Spurrier, Dennis Erickson, Mike Martz and Mike Riley.

However, there were signs of trouble in a league put together in less than one year.

Dundon invested $250 million in the AAF shortly after play began. At the time, Ebersol said reports the Alliance was short on cash and needed a bailout from Dundon in order to make payroll were untrue. He said the league had a technical glitch in its payroll system that was fixed.

The AAF aspired to be a league for players with NFL hopes, but it could not reach agreement with the NFLPA to use players at the end of NFL rosters.