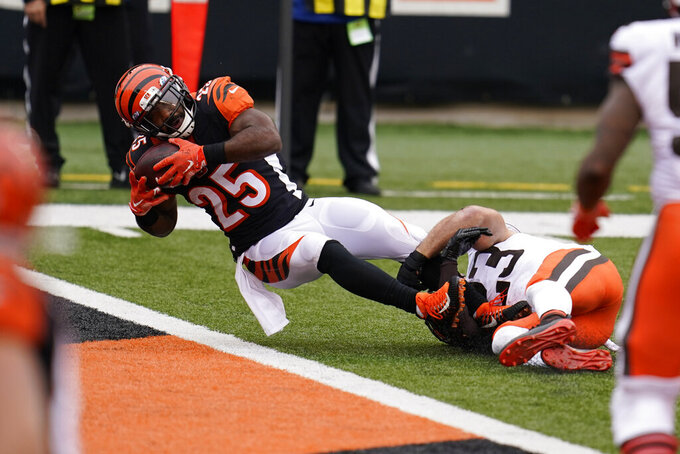 Cincinnati Bengals' Giovani Bernard (25) goes in for a touchdown while being tackled by Cleveland Browns' Andrew Sendejo (23) during the second half of an NFL football game, Sunday, Oct. 25, 2020, in Cincinnati. (AP Photo/Michael Conroy)

CINCINNATI (AP) — With its backfield already depleted and running game anemic, the Cincinnati Bengals now may have to do without Giovani Bernard.

Bernard, who has been starting since featured back Joe Mixon injured a foot on Oct. 18, was held out of practice Wednesday with a concussion, the team said. It wasn't clear if he would be able to play in Sunday's game against the New York Giants (3-7).

Bernard, previously a situational player known more for his blocking and pass-catching, has rushed 57 times for 191 yards and two touchdowns.

If he can't go, the likely starter would be Samaje Perine, who has played in every game this season but has just 24 carries for 102 yards.

Cincinnati's running game has struggled with Mixon out and injuries to multiple offensive linemen this season, but it has been overshadowed by rookie quarterback Joe Burrow and the passing game.

Then, the team lost Burrow to a season-ending knee injury in last week's loss to Washington. Either backup Ryan Finley or practice squad quarterback Brandon Allen will get the start Sunday.