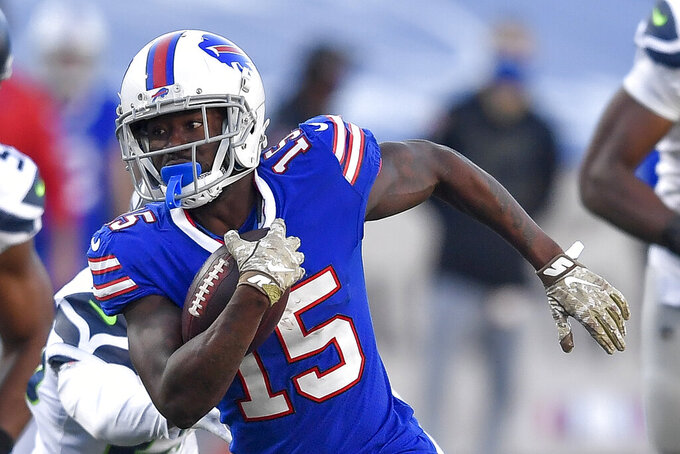 FILE - In this Nov. 8, 2020, file photo, Buffalo wide receiver John Brown (15) runs with the ball against the Seattle Seahawks during the second half of an NFL football game in Orchard Park, N.Y. The Bills released receiver John Brown and defensive lineman Quinton Jefferson in moves made Wednesday, March 10, 2021, to free up much-needed space under the newly announced salary cap. (AP Photo/Adrian Kraus, File)

The cuts come a week before the NFL’s signing period opens, and free up more than $14.4 million in space, according to Spotrac.com. Before the cuts, the Bills were projected to have about $3 million available under the $182.5 million cap established earlier in the day.

Brown was hampered by knee and foot injuries that limited him to nine games last season in which he had 33 catches for 458 yards and three touchdowns. It came a year after Brown led Buffalo with 72 catches for 1,060 yards — both career bests — and six touchdowns playing alongside slot receiver Cole Beasley.

Aside from injuries, Brown’s role as an outside speed threat in 2020 was further diminished following the addition of Stefon Diggs and the emergence of rookie Gabriel Davis.

Diggs, acquired in a trade with Minnesota, led the team with eight touchdowns, became Buffalo’s first player to lead the NFL in both catches (127) and yards receiving (a team-record 1,535), and made the All-Pro team. Davis was a fourth-round draft pick who had 35 catches for 599 yards and seven touchdowns, and finished the season starting in place of Brown.

The subtractions provide the Bills an opportunity to re-sign several pending restricted free agents, including offensive lineman Jon Feliciano and receiver Isaiah McKenzie, as well as address other needs once the signing period opens.