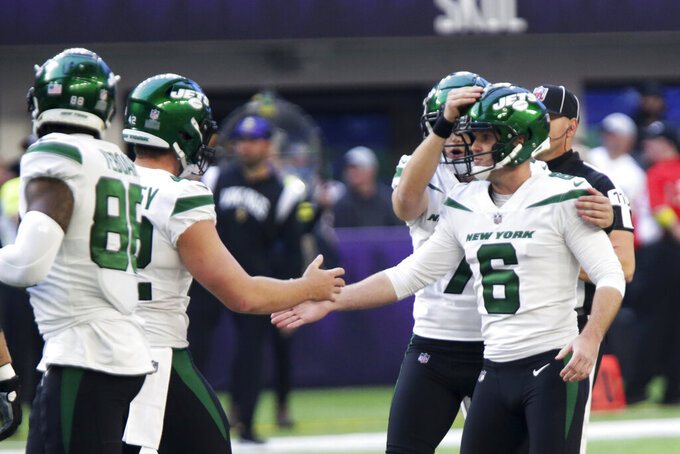 New York Jets place kicker Greg Zuerlein (6) celebrates with teammates after kicking a 60-yard field goal during the first half of an NFL football game against the Minnesota Vikings, Sunday, Dec. 4, 2022, in Minneapolis. (AP Photo/Andy Clayton-King)

TURNOVER DIFFERENTIAL: Jets even; Bills even.

JETS PLAYER TO WATCH: QB Mike White. He has been solid in two starts since replacing the benched Zach Wilson, sparking a once-stagnant offense with efficient play and command in the huddle. But Buffalo derailed White’s short-lived run last season when he threw four interceptions in a blowout loss. It was the last regular-season game he played until this two-game stretch.

BILLS PLAYER TO WATCH: RB Devin Singletary. The fourth-year running back is once again providing the Bills offense balance as he did in the final stretch of last season. He has 58 carries for 256 yards and four TDs in his past four games, after managing just 79 carries for 347 yards and a TD receiving in his first eight.

KEY MATCHUP: Bills O-line vs. Jets D-line. The Jets harassed Josh Allen in sacking the Bills quarterback five times — the most in two seasons — in their previous meeting. Allen finished with a season-low 205 yards passing, and hurt his throwing elbow when defensive lineman Bryce Huff knocked the ball loose as the quarterback had has arm ready to pass in the final minutes. Buffalo could also be without starting LT Dion Dawkins, who missed last week’s game with a high ankle sprain.

KEY INJURIES: Jets RB Michael Carter is back after missing last Sunday with a sprained lower ankle. ... Rookie RT Max Mitchell was placed on the non-football injury list earlier this week, so George Fant will step back into the starting role. ... Bills staring LB Matt Milano is listed as questionable with a knee injury. He missed two practices before working out on a limited basis on Friday. ... Dawkins is closer to return after missing one game with an ankle injury. He got in three practices and is listed as questionable. ... DT Jordan Phillips (shoulder) has been ruled out.

SERIES NOTES: The Jets are 3-6 in their past nine meetings against the Bills, and haven’t won consecutive games against their division rival since sweeping the two-game season series in 2016. ... Buffalo swept the series last year, outscoring the Jets by a combined margin of 72-27. The Bills gained a combined 913 yards in those two outings, while forcing five turnovers and getting 10 sacks, including nine in a season-ending 27-10 win. ... Buffalo’s 317 yards and 19 first downs against New York last month remain season lows.

STATS AND STUFF: The Jets and Bills haven’t finished a season with both owning winning records since 1998, when the AFC East also included Indianapolis. The Jets (12-4) won the division with Buffalo (10-6) finishing third. ... Jets QB White was 31 of 57 for 369 yards at Minnesota, making him the fifth player with at least 350 yards passing in at least two of his first five career starts. He joined Cam Newton (three games), Jeff Blake (two), Kirk Cousins (two) and Jim Miller (two) as the only players to do so. ... RB Zonovan Knight ran for 90 yards on 15 carries and added five catches for 28 yards last Sunday, making him the first undrafted rookie to get at least 221 yards from scrimmage in his first two games since Indianapolis’ James Mungro in 2002. ... WR Garrett Wilson has 790 yards receiving, just 54 shy of Keyshawn Johnson’s franchise record for a rookie. With White at quarterback the past two games, Wilson has 13 catches and 257 yards receiving. ... After going 1 for 6 on touchdowns in the red zone last week, the Jets rank 26th in the NFL in efficiency inside the 20-yard line at 48.6% (18 for 37). ... DL Quinnen Williams has a career-high nine sacks this season, the most among interior linemen. Williams’ 21 quarterback hits are the most by an interior lineman and fifth overall in the NFL. ... K Greg Zuerlein set the franchise record last week with a 60-yard field goal, surpassing the mark of 57 he shared with Chandler Catanzaro. Zuerlein booted five field goals at Minnesota, joining Baltimore’s Justin Tucker as the only players to have made at least five field goals with a kick of 60 or more yards in the same game since 1970. ... Buffalo is playing at home for the first time since a 33-30 OT loss to Minnesota on Nov. 13. A massive snowstorm led to the NFL relocating the Bills home game against Cleveland to Detroit the following week. ... The Bills are 9-3 or better through their first 12 games for the third time since 2019, and 12th overall. ... QB Allen is 7-3 this season when committing a giveaway and 27-20 overall. ... With 165 TDs (including one receiving), Allen ranks second behind Dan Marino (171) for most by a player in his first five NFL seasons. ... WR Stefon Diggs’ 28 TDs with Buffalo rank tied with Stevie Johnson for seventh in team history, and one short of matching Jerry Butler. ... Diggs’ 91 catches this year already rank sixth on the team’s single-season list. ... Since the start of the 2019 season, the Bills are 16-2 against QBs with 16 or fewer starts, including 1-0 against White. Over those 18 games, Buffalo has allowed just 11 TDs passing, while combining for 25 interceptions and 47 sacks. ... Von Miller, who had season-ending knee surgery on Tuesday, leads Buffalo with eight sacks. Next in line is Greg Rousseau with five.

FANTASY TIP: Diggs is a must start every week, including this one in which he’ll likely be shadowed by Jets star rookie cornerback Sauce Gardner. Diggs has scored in six of his past eight and still had five catches for 93 yards against the Jets last month.