Bills riding momentum in preparing to face Colts in playoffs 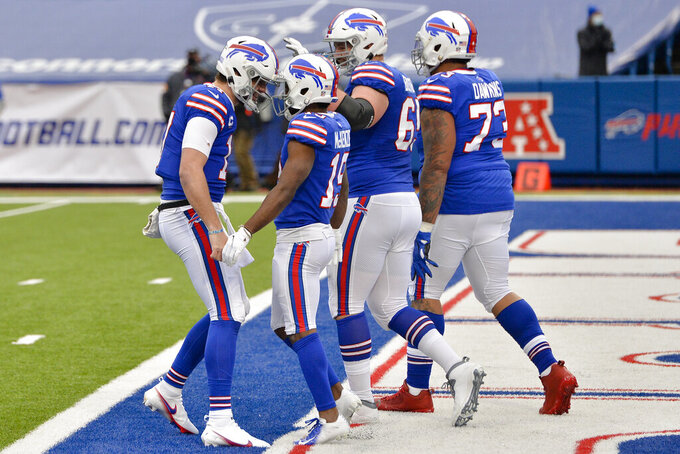 Having gone one-and-done in their two most recent playoff appearances since snapping a 17-year postseason drought in 2017, these Bills have loftier objectives as they prepare to host the Indianapolis Colts in the wild-card round on Saturday.

It was evident in how Buffalo punctuated its franchise-record-matching 13-win season with a 56-26 blowout over the Miami Dolphins.

Rather than give his starters a break in a game the Bills would have clinched the AFC’s No. 2 seed anyway with Pittsburgh's loss to Cleveland, coach Sean McDermott had them play the entire first half. Buffalo scored four touchdowns in the second quarter to build a 28-6 lead. The backups followed by scoring another 28 points in producing the second-most points in franchise history and help snuff the Dolphins’ playoff hopes.

The decision by McDermott was a switch from 2020 when he limited a majority of his starters to one or two series in a mean-nothing 13-6 season-ending loss to the New York Jets. What followed was an inconsistent playoff outing in which the Bills squandered a 16-0 second-half lead in a 22-19 overtime loss at Houston.

Buffalo has gone one-and-done in its past five playoff appearances and hasn't won a postseason game since defeating Miami 37-22 on Dec. 30, 1995 — the third-longest active drought in the NFL, including Cleveland.

No one on Sunday was apologizing if it appeared Buffalo ran up the score if it meant maintaining some semblance of rhythm and momentum to carry over into the postseason.

“That’s our job on offense is to score the ball,” said Josh Allen, who finished with 224 yards passing and three touchdowns in one half. “Until coach McDermott tells us to take it easy, we’re going to keep doing what we do.”

The Bills are on a roll closing a campaign in which Allen broke many of the team’s single-season passing marks, and Buffalo finished with 501 points to eclipse the team record of 455 set in 1991.

Buffalo has won six in a row for the first time since 2004, and became the first team to close a season winning three straight by 25 points or more since the 1996 Green Bay Packers, who went on to win the Super Bowl.

The offense will need to be sharp in facing a balanced Colts opponent with an offense that ranks 10th in yards gained, and a defense that has allowed the eighth-fewest yards.

Buffalo’s ability to score in bunches has taken the burden off its defense by forcing opponents to become one-dimensional attempting to keep up. It’s a formula that has worked effectively since the Bills endured their only rut of the season by losing consecutive games to Tennessee and Kansas City in Weeks 5 and 6.

The Titans frustrated Allen by taking away his deep-passing ability, which led to Buffalo scoring a season-low 16 points in a 42-16 loss. The Chiefs, by comparison, used a ball-control running attack to keep Allen off the field in a 26-17 win. Rookie Clyde Edwards-Helaire had a season-best 161 yards rushing in a game Kansas City enjoyed a 15-plus minute edge in time of possession.

Of course, those are two of the best teams in the AFC.

The Colts have both the defense to potentially stifle Allen, and a Jonathan Taylor-led running attack to play keep away.

Then again, the Bills have made great strides since their two-game skid.

Buffalo would be riding a 10-game winning streak if not for a 32-30 loss at Arizona, dubbed “The Hail Murray,” in which DeAndre Hopkins outleaped three defenders in the end zone to come down with Kyler Murray’s 43-yard touchdown pass with 2 seconds left.

Rather than let the loss fester, the Bills used it as motivation.

“This is kind of crazy to say, but I’m glad it happened,” safety Micah Hyde said.

“I think that game really gave us confidence in the sense that we’ve got to capitalize on each and every play,” Hyde added. “I think it made us better players and it made our team better because of it.”

Buffalo joined the 2012 New England Patriots in becoming just the second team since 1991 to top 20 first downs in each of their 16 regular-season games.

A faster start. After scoring TDs on four consecutive opening possessions, Buffalo has been limited to a touchdown and field goal in its past five outings.

WR Isaiah McKenzie proved he can capably fill a larger role in the event starter Cole Beasley misses a second game with a knee injury. McKenzie scored two touchdowns receiving and returned a punt 84 yards for a touchdown

Folding table sales. Though about 6,700 fans will be allowed to attend the game Saturday, tailgating — and the tradition of fans jumping through the tables — is prohibited.