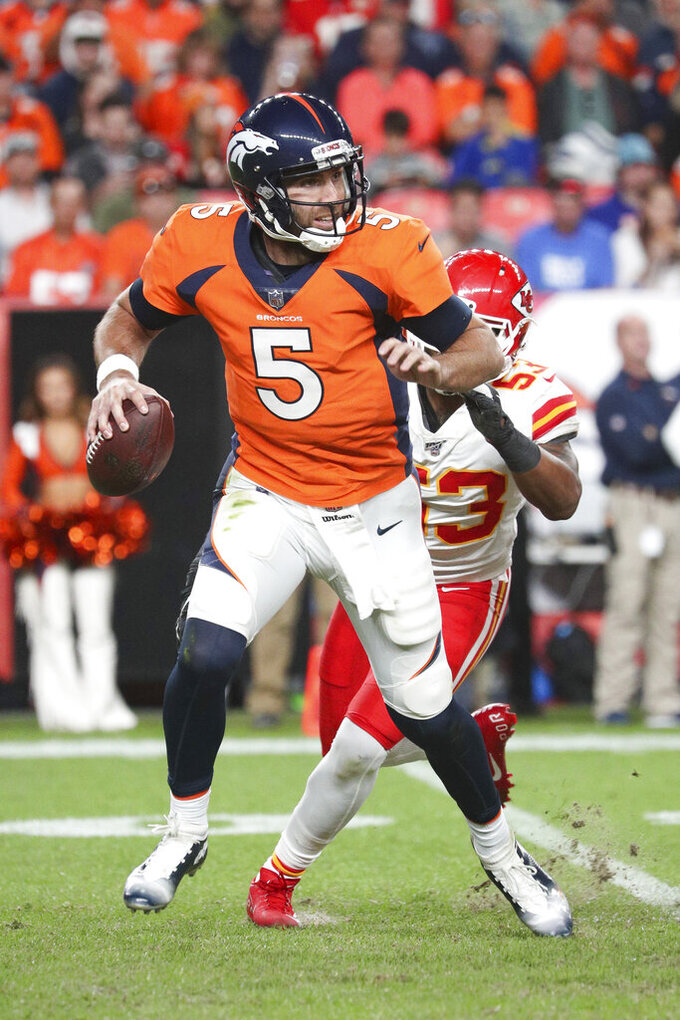 Denver Broncos quarterback Joe Flacco (5) scrambles with the ball in an NFL game against the Kansas City Chiefs, Thursday, Oct. 17, 2019, in Denver. The Chiefs defeated the Broncos 30-6. (Margaret Bowles via AP)

"I just saw a quarterback that had lost a game and he was very frustrated with how it went," Scangarello said Thursday in his public first response to Flacco's accusations that Denver's coaching staff wasn't aggressive enough.

"We've lost a couple of heartbreakers. He's a competitor and that stuff bothers him, whatever it might be, and I think in that moment something he said came out, but it's nothing more than that," Scangarello said. "He's in the building, he's great and everything is good."

Flacco fumed over the Broncos' conservative play-calling after Denver's 15-13 loss at Indianapolis last weekend, the third time they had blown a lead in the final minute.

Flacco, who one day later was diagnosed with a herniated disk in his neck, was particularly peeved that the Broncos didn't dial up more throws to receiver Courtland Sutton, who had three catches for 72 yards and drew five flags on cornerback Rock Ya-Sin while facing man coverage all day.

He also disagreed with a safe run on third-and-5 from the Indianapolis 43 with 1:55 left that was stuffed and gave the ball back to the Colts for what turned out to be the winning drive.

"I think the offense needs to do what it needs to do every week to win," Scangarello said, adding, "I thought we were aggressive in the game, took some shots and it just didn't go our way."

Sure, Scangarello said, he regretted some calls but that's every game.

"You always have regrets with play calls and you always can do things differently, whether it's technique, better call, whatever it is," Scangarello said. "You've got to live with those consequences. You don't get any get-backs."

Scangarello said he and Flacco are good.

"Joe and I have a great relationship," he said. "We talked after the game, we talked, he was hurt, he was injured and had a long flight back and all that stuff. We talked that night, we talked the next morning and we talk every day."

Coach Vic Fangio said Thursday that a second doctor's opinion confirmed Flacco has a herniated disk in his neck that requires six weeks' rest. He said he'll meet with his coaches and decide this weekend whether to keep Flacco on the 53-man roster or put him on IR, ending his season.

The Broncos claimed Allen off waivers from the Rams on Sept. 1 after losing rookie Drew Lock to a sprained right thumb. Lock is scheduled to return from IR and practice in Week 11, but there's no guarantee he'll play this year.

While Scangarello will have to pare down his playbook Sunday, Allen's greater mobility actually adds a wrinkle to Denver's offense, which is averaging just 15.6 points a game.

"Of course, Joe is a veteran that's been in the league and he banked all those reps and all that," Scangarello said. "So yeah, of course you have to have a plan to do what (Allen) does well."

"It's pro football. Quarterbacks, they break out every year. It's the National Football League. Everybody here has talent. It doesn't matter if they're first-string, second-string, third-string. Everybody's been the man at some point and he's just got to harness that energy," Miller said.

"Gardner Minshew, nobody knew that he was going to have the type of year that he's having right now. He got a chance and he took advantage of it. I'm hoping for some of the same magic to happen with Brandon."