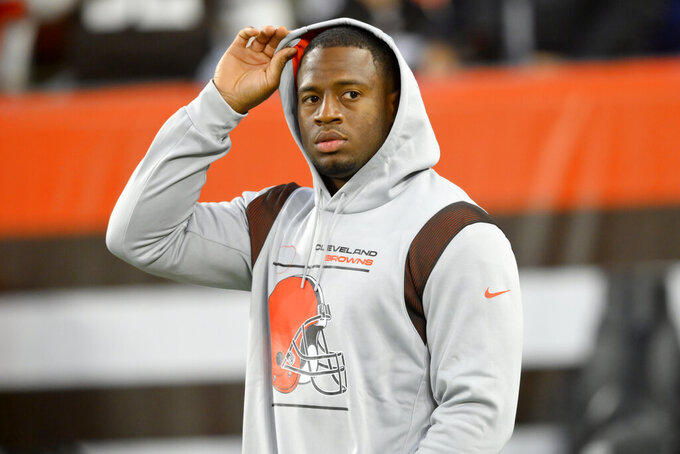 They're back to wearing masks inside the building, holding meetings virtually, closing their cafeteria and not taking any chances.

“It always puts things back into perspective of the weird times that we are in," linebacker Anthony Walker Jr. said Wednesday. "COVID is still a thing and we have to respect that as such.”

Chubb tested positive for the coronavirus on Tuesday, and it's possible the star running back will miss Sunday's game against the New England Patriots.

Rookie running back/wide receiver Demetric Felton also tested positive and was placed on the reserve/COVID-19 list along with Chubb, who is coming off a 137-yard, two-touchdown performance in a win over Cincinnati.

Both players will need to be symptom free and have two negative tests 24 hours apart to be eligible to face the Patriots. Chubb and Felton are both vaccinated.

Browns coach Kevin Stefanski would not disclose whether Chubb is experiencing any symptoms, leaving his status uncertain and perhaps Cleveland without its best offensive player this week.

In the meantime, the Browns had their fifth positive test in three days as backup guard Nick Harris was placed on the reserve/COVID-19 list. Stefanski said the second-year lineman was the only new positive test.

With Chubb and Felton currently out, the Browns (5-4) are running out of running backs.

Kareem Hunt is on injured reserve with a calf injury and not ready to return. Stefanksi said the versatile Hunt will not be designated for return this week.

For now, third-stringer D'Ernest Johnson, who rushed for a career-high 146 yards in his first NFL start in a win over Denver on Oct. 21, has moved into the starting spot.

“We are extremely confident in D’Ernest,” said quarterback Baker Mayfield. "That has not been a question yet. Obviously, very unfortunate news about Demetric and Nick. Obviously, we have been here before. We had to deal with a lot of issues last year with this. It is kind of one of those fluid situations.

"We just have to be ready to go. Next man up mentality, and we are confident in D’Ernest, that's for sure.”

Because of the recent COVID-19 cases, the Browns are this week following enhanced protocols, which include daily testing for players and staff.

The Browns were one of the league's hardest-hit teams by the virus in 2020 so this is nothing new. Stefanski missed last season's playoff win in Pittsburgh after a positive test.

“It’s things that we’ve done before and we know virtual meetings are not ideal,” Stefanski said "But we also understand that you can cover a lot of ground in them.”

NOTES: Mayfield was limited in practice by a “nagging” sore foot injury, but said it's “nothing major.” He expects to do more throwing in the next few days. He's already playing with a torn labrum and fracture in his left, non-throwing shoulder. ... Rookie LB Jeremiah Owusu-Koramoah practiced after missing three games with a high ankle sprain and could return against the Patriots. “Having him back obviously would be a great boost to our defense,” Walker said. "His explosiveness, the way he plays on the football field, definitely will boost our defense, and we’ll be happy to have him back.” ... DE Myles Garrett, the league leader in sacks, was held out of practice with a foot issue. WR Jarvis Landry (knee) didn't practice and DE Jadeveon Clowney (ankle, knee) was limited.