Browns in good hands with Brissett while Watson suspended 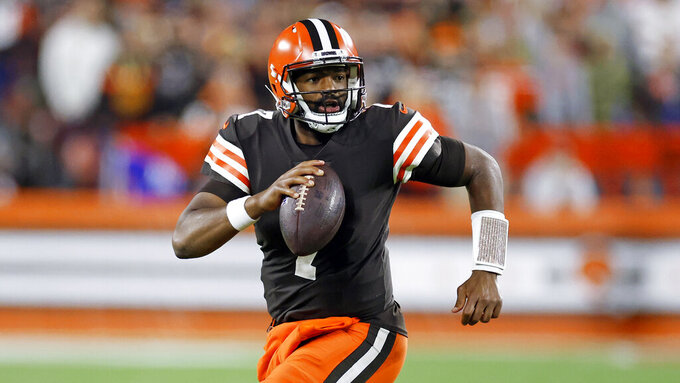 Cleveland Browns quarterback Jacoby Brissett scrambles for a short gain during the second half of an NFL football game against the Pittsburgh Steelers in Cleveland, Thursday, Sept. 22, 2022. (AP Photo/Ron Schwane)

CLEVELAND (AP) — Jacoby Brissett's assignment is clear: keep the Browns competitive and in contention while Deshaun Watson's away.

He's doing much more than that.

During a 29-17 win over the Pittsburgh Steelers on Thursday night, Brissett, who has zero illusions about his role with Cleveland, effectively moved the offense with pin-point throws and picked up first downs with timely quarterback sneaks.

It was the second straight strong performance by the cool-headed 29-year-old Brissett, who also provided off-field leadership during a short week in helping his young teammates shake off a disastrous loss to the New York Jets four days earlier.

“He’s doing a great job leading us and he’s hungry, too, man,” said running back Kareem Hunt. "He’s a heck of a football player going out there and showing what he can do.”

Brissett's steadiness and play is why the Browns (2-1) signed him. He's also given them confidence they'll be in the playoff mix when Watson returns from his 11-game suspension for alleged sexual misconduct in December.

Until then, it's Brissett's show.

“He’s been around some of the great quarterbacks in the game, and he just carries himself that way.”

Some of Tom Brady rubbed off on Brissett when he broke in with New England, and he developed further in Indianapolis as first Andrew Luck's backup and then the Colts starter for 30 games.

Brissett's not trying to impress anyone.

"I'm not in this to answer anybody’s questions,” he said after beating the Steelers, something few Cleveland quarterbacks have achieved in the past 20 years. “I'm in here to play good football, play for my teammates and enjoy this moment. That's really what it's all about."

Brissett has settled in after an emotional, shaky opener at Carolina, an outing that had Browns fans worried this season might jump the track.

In the past two games, he's completed 43 of 58 passes (74%) for 449 yards with three touchdowns and one pick. Brissett's taking care of the ball, spreading it around, and he's developing great chemistry with wide receiver Amari Cooper, who has 16 catches the last two weeks.

"I don’t think he’s proven anything we didn’t already know about him,” Cooper said. “I don’t think he would be in the league if he wasn’t a good quarterback at this point. We’re really glad to have him.”

Brissett's soaking in every moment.

In the fourth quarter against Pittsburgh, the 6-foot-4, 235-pounder busted through the line on a third-and-1 sneak for 6 yards. He tumbled to the ground, popped up and punched the air in celebration.

“Every time I see a quarterback do that in a game, I'm like, ‘Dang, that is so sick. I want to do that one time.’ I told myself if I get a sneak, I'm doing it," he said with a smile. "I almost blacked out."

Nick Chubb had 113 yards, with 86 coming after initial contact.

“They ran the ball, we got our (butts) kicked,” said Steelers tackle Cameron Heyward. "Simple as that.”

Special teams remain a major concern. Cleveland's getting nothing from its return game, rookie Cade York missed another extra point, and the Browns looked shaky on a late onside kick after failing to recover one against the Jets.

Tight end David Njoku had the best game of his career — 9 catches for 89 yards and a touchdown.

The Browns envision big things for Njoku, which is why they signed him to a four-year, $56.75 million contract extension.

Brissett may look for him even more.

York's second missed extra point in two weeks would be more worrisome if he didn't bounce back. He made a 34-yard field goal in the third quarter and his last PAT in blustery conditions.

Linebacker Anthony Walker Jr.'s season-ending left quadriceps injury is a major blow. He'll soon undergo surgery. A captain, he's also the defensive signal caller, a role that will fall to Jacob Phillips, who had a sack and broke up a pass after replacing Walker. ... LB Jeremiah Owusuro Koramoah (groin), DT Taven Bryan (hamstring) were also hurt but the team didn't have any updates on them.

A long weekend, giving the Browns time to process an emotional few days, do some self-evaluation and healing up before visiting the Atlanta Falcons on Oct. 2.