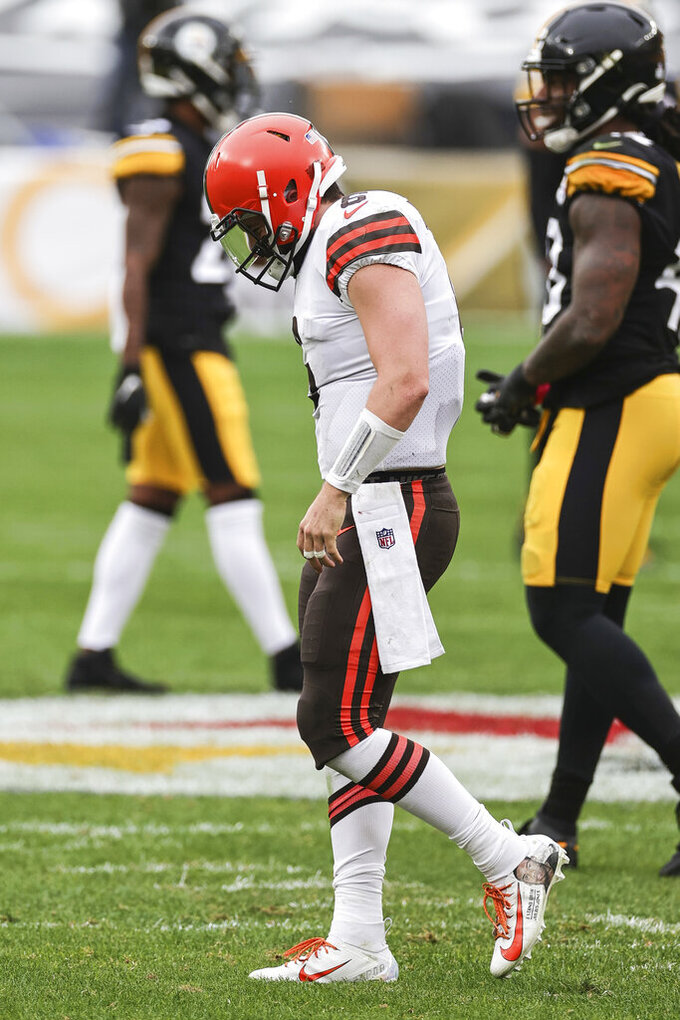 Cleveland Browns quarterback Baker Mayfield (6) tries to recover from a sack as he walks off the field during an NFL game against the Pittsburgh Steelers, Sunday, Oct. 18, 2020, in Pittsburgh. The Steelers defeated the Browns 38-7. (Margaret Bowles via AP) 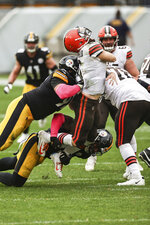 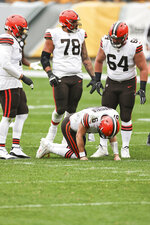 He's ducking from the barrage.

Cleveland's quarterback has been under a steady attack this week following a dreadful performance in Pittsburgh, a two-interception outing that has brought out his critics and fueled their argument that he's not the one to lead the Browns back to the playoffs or NFL relevance.

On Wednesday, Mayfield shot back.

"I don't give a damn what they say," Mayfield said on a Zoom call. “It is within this building. We know we can do better. I know I can do better. The outside noise does not matter. They get paid to talk. We get paid to do our work.”

In the aftermath of Sunday's 38-7 loss to the Steelers, who returned an interception for a touchdown on Cleveland's first possession and pummeled Mayfield for three quarters, the QB's play was harshly panned and the Browns (4-2) were labeled as overrated on several national TV shows.

Mayfield went 10 of 18 for 119 yards with two picks — he has four in the past four quarters — and a 54.9 passer rating before being pulled by coach Kevin Stefanski, who didn't want the Steelers to do any more physical damage to his QB already dealing with bruised ribs.

The next day, several prominent analysts piled on, picking apart Mayfield's game with one going as far as saying wide receivers Odell Beckham Jr. and Jarvis Landry should demand trades.

It's nothing new for Mayfield, who has never shied from the spotlight but acknowledged wrestling with self-doubt while struggling last season. He feels better equipped now to handle criticism and fix what he's doing wrong.

“I think it is all very correctable things that will be corrected,” he said. "I do not feel the same way.”

The stinging loss in Pittsburgh ended the Browns' four-game winning streak. It also mirrored a 38-6 loss to Baltimore in Week 1, and coupled together the blowouts inside the AFC North have dulled some of the shine to Cleveland's best start in years.

While it was just one game, it was a huge one given the hype.

Mayfield said it's vital for the Browns to bounce back this week at Cincinnati.

“I’d say the feeling throughout the building after that loss, 4-2 has never felt so much like 0-6 before,” Mayfield said. “But that’s because we have very high expectations for ourselves. So we’re eager to get back to work, get out there and fix the problems that we know are within our own control.”

Mayfield is expected to practice more this week after being limited by bruised ribs suffered on Oct. 11 against Indianapolis.

“He'll throw,” Stefanski said. “He'll be limited but not to the extent he was last week.”

The outside criticism of Mayfield has not distracted the Browns — for now. Beckham, no stranger to criticism, has spoken to the quarterback about not letting the condemnation rattle him. He said Mayfield won't back down.

“He is going to come out fired up," Beckham said. "I think he has always been inspired the negativity, the doubt, the haters. And, you know, we will see on Sunday how he responds. It's not about what happened to you, it is about how you respond. So, I am sure he is ready to go and he is fired up. The worst part about is you have to wait till Sunday.”

And, as for reports that he should ask for a trade, Beckham said he believes in Mayfield.

“I’m here,” he said. "I’ve got Baker’s back. It’s a one-day-at-a-time approach. It’s all just background noise. Really don’t have much to say about it.”

Mayfield doesn't need to analyze the league's statistical charts to know he's not playing up to the expectations that come with being a No. 1 overall draft pick. He's ranked 29th in completion rate (61%) and 26th in yards (1,095) and passer rating (84.3).

He's not helping the Browns win games as much as they're not letting him lose them.

Cleveland's running game, which still leads the league despite not having Pro Bowler Nick Chubb the past two weeks because of a knee injury, has carried the offense. The Browns' defense has a league-high 12 takeaways, but didn't force one against the Steelers.

Mayfield knows the only thing the Browns can do is put last week's game behind them.

“It’s the next-game mentality,” he said. "We know we can be better, I know I can be better. There’s no the-world-is-crashing-right-now mentality. We’re in it together.”

NOTES: Beckham was sent home last week feeling ill and had to twice test negative for coronavirus before he could rejoin his teammates. “Not in an arrogant way, I don’t think COVID can get to me,” he said. “I don’t think it’s going to enter this body. I don’t want no parts of it, it don’t want no parts of me. It’s a mutual respect.” ... OBJ said his sideline outburst Sunday in Pittsburgh was out of frustration for being pulled by coaches and losing. He doesn't care how it looked. ”I am who I am," he said. Beckham said he's been dealing with a toe injury for several weeks. ... Starting S Ronnie Harrison cleared concussion protocol and practiced.