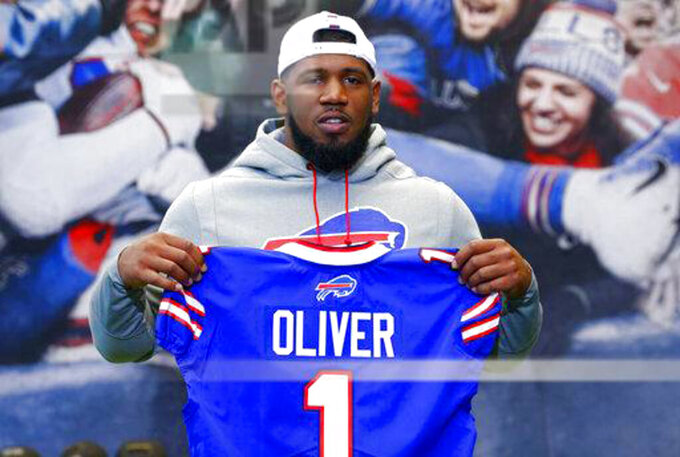 HOUSTON (AP) — Buffalo Bills defensive lineman Ed Oliver was arrested during a traffic stop in the Houston area and charged with drunken driving and illegally carrying a handgun, authorities said.

Montgomery County sheriff’s deputies pulled Oliver over Saturday after receiving reports around 9 p.m. of someone driving recklessly in a construction area north of the city while towing an ATV on a trailer, Lt. Jim Slack of the Montgomery County constables office said in a statement.

Oliver failed a sobriety test and the deputies found a small caliber pistol in his truck, Slack said. Texas law prohibits having a handgun while committing a crime, and Slack said Oliver faces a misdemeanor charge for having the weapon.

Video published by the Montgomery County Police Reporter appears to show officers examining Oliver's eyes and having him walk in a line on the roadside before putting him in handcuffs.

Oliver is from Houston, where he also played his college career. He was selected by the Buffalo Bills in the first round of the 2019 draft. Montgomery County records did not list Oliver as being in the jail Sunday morning; the Houston Chronicle reported that he was released after posting bond.

The team said in a statement that “we are aware of the situation and we are gathering more information.”

Oliver’s agent did not immediately respond to a request for comment.