Burrow to the rescue? Lowly Bengals look for next leader 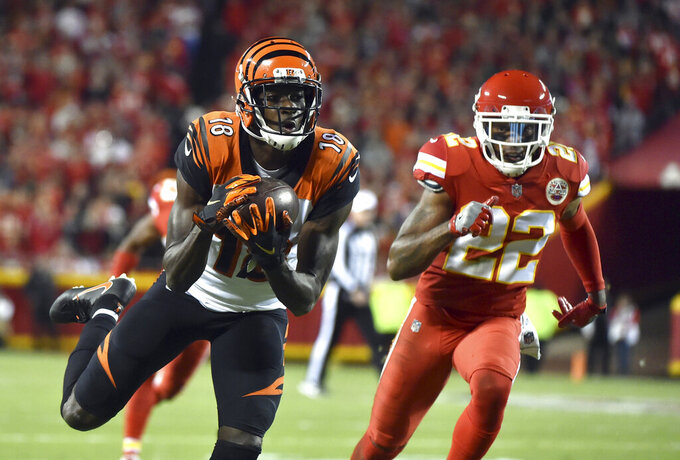 FILE - In this Oct. 21, 208, file photo, Cincinnati Bengals wide receiver A.J. Green (18) makes a catch in front of Kansas City Chiefs defensive back Orlando Scandrick (22) during the first half of an NFL football game in Kansas City, Mo.The Bengals will be looking to take a receiver high in the draft with all the uncertainty over Green. The veteran hasn’t agreed to a multi-year deal and will be in Cincinnati for only one more year guaranteed after the team used the franchise tag on him. (AP Photo/Ed Zurga, File)

CINCINNATI (AP) — In 2003, everything was in place for the Bengals to take a quarterback with the first overall draft pick.

Cincinnati was coming off a 2-14 season. Attendance was down. Jon Kitna was in his 30s. A new head coach — Marvin Lewis — wanted a franchise quarterback. A Heisman Trophy winner was available.

Carson Palmer from USC became the face of a forlorn franchise and made it relevant again, leading Cincinnati to the playoffs twice — both losses — before insisting he wanted out.

The Bengals hadn't won a playoff game since the 1990 season, one of the worst stretches of futility in NFL history.

The streak is intact as the Bengals get ready to repeat history with the first overall pick.

They're coming off a 2-14 season. Attendance is down. Andy Dalton is in his 30s. Second-year head coach Zac Taylor wants a franchise quarterback. A Heisman Trophy winner is available.

It will be a shock if the Bengals trade the pick or take someone other than the LSU quarterback with Ohio roots. He's a good fit for Taylor's system and he'll spark interest — at least initially — in a fan base that's largely apathetic.

“We talk about the traits we look for in a quarterback: guys who elevate people around them, and guys who have a history of winning,” Taylor said.

What comes next will be far more interesting in the Bengals' three days of drafting. Some questions in play as the rounds advance:

Dalton has one year left on his contract. While there was a thought the Bengals could trade him for a draft pick — which is Dalton's preference — that hasn't happened. The Bengals are considering keeping Dalton to help groom a rookie quarterback in an unsettled offseason resulting from coronavirus precautions.

“That's one of the options you keep on the table for those very reasons,” Taylor said.

WHO WILL CATCH THE BALL? The Bengals essentially bought themselves time by using the franchise tag on receiver A.J. Green, who wants a multi-year deal coming off two injury-shortened seasons. When Green was sidelined by toe and ankle injuries, the offense cratered. With many options available in the receiver class, the Bengals will consider taking one on the second day of the draft.

Even if he's around only one more season, Cincinnati is counting on Green to ease the quarterback transition.

WHO WILL BLOCK? Work on overhauling a troublesome offensive line began in the offseason when left tackle Cordy Glenn and right guard John Miller were released. The Bengals signed guard Xavier Su’a-Filo, and Jonah Williams is expected to take over at left tackle after missing his rookie season with a shoulder injury, but there's more work to be done.

LOOKING FOR LINEBACKERS? Linebackers were a glaring weak spot on a defense that's also undergoing a renovation in the offseason. The Bengals signed linebacker Josh Byrnes but will be looking for a significant upgrade at that position in the draft.

WHAT'S THE INSIDE SCOOP? Taylor coached the Senior Bowl in January, allowing the Bengals to get to know some of the prospects better. With contact limited the past few weeks because of coronavirus precautions, it turned out to be a valuable head start in preparing for the draft.

“I felt we got an earlier start because of the Senior Bowl than we normally would, which has consequently helped us right now,” Taylor said.