Cardinals DL Peters out for season with knee injury 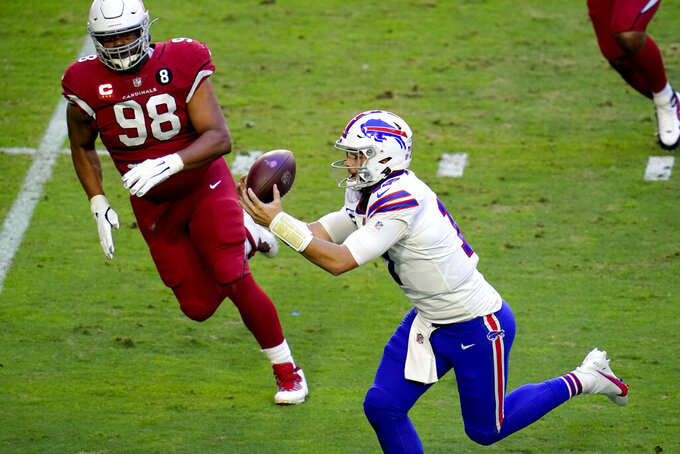 Arizona Cardinals defensive tackle Corey Peters is out for the rest of the season because of a knee injury.

The 32-year-old Peters was hurt just before halftime of Arizona's 32-30 win over the Buffalo Bills on Sunday. He had to be carted off the field and coach Kliff Kingsbury acknowledged after the game that the injury looked serious.

Kingsbury confirmed on Wednesday that Peters would miss the final seven games of the regular season. The 10-year veteran has been with the Cardinals for five years and started all nine games this season. He had 15 tackles, including three for a loss.

“Defensive line-wise, we're a little bit banged up there,” Kingsbury said. “But we'll have enough guys to play and that's all you can ask for. (Peters is) a tough loss like I mentioned the other day because of his leadership and what he brings to the locker room.”

Peters is the third defensive starter who is out for the season. Linebacker Chandler Jones, a 2019 All-Pro, suffered a biceps injury in October. Cornerback Robert Alford tore a pectoral muscle in practice during the preseason.

The Cardinals are thin on the defensive line for their game against the Seattle Seahawks on Thursday night. Zach Allen (ankle), Rashard Lawrence (calf) and Leki Fotu (ankle) are all on injured reserve. Jordan Phillips is struggling with a hamstring injury.

Arizona was down to three healthy defensive lineman against the Bills on Sunday, including Josh Mauro, Angelo Blackson and Trevon Coley.